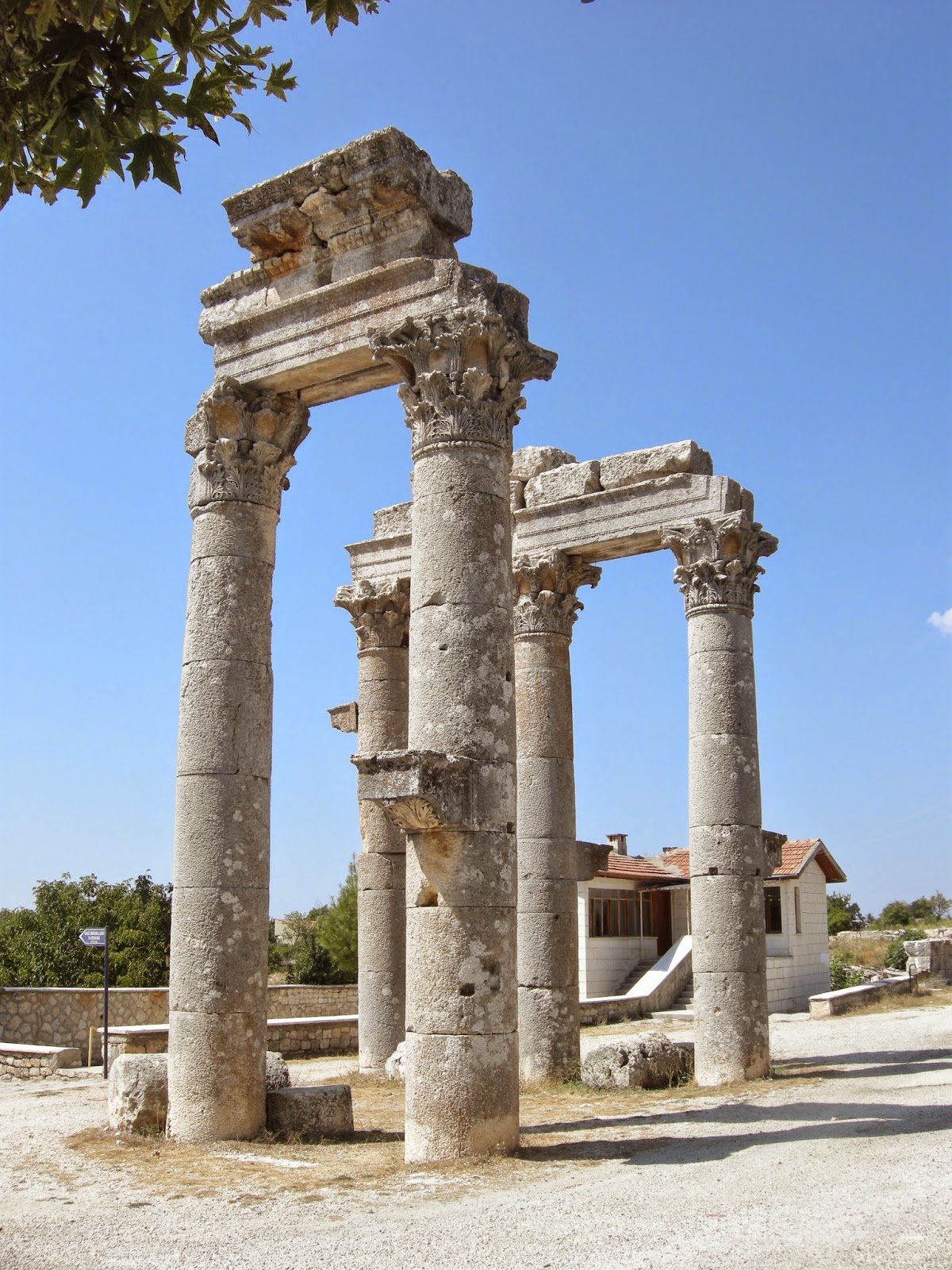 The Roman city of Diocaesarea (present day Uzuncaburc) was the cult center of greater Olba (Ura), which lies 4 kilometers to the east; both Diocaesarea and Olba lie 30 kilometers north of Silifke.  The Parade Gate (pictured above) that leads down the central colonnaded street, dates from the 1C AD, and originally was six columns across, and two deep, totaling twelve columns in all.  The consoles protruding from the columns once held statues.  Beyond the Parade Gate is the central colonnaded street that ends at the temple of Tyche.  Pictured below, a very old ottoman style house sits next to the Parade Gate, where also sits a stele with a Roman proclamation. 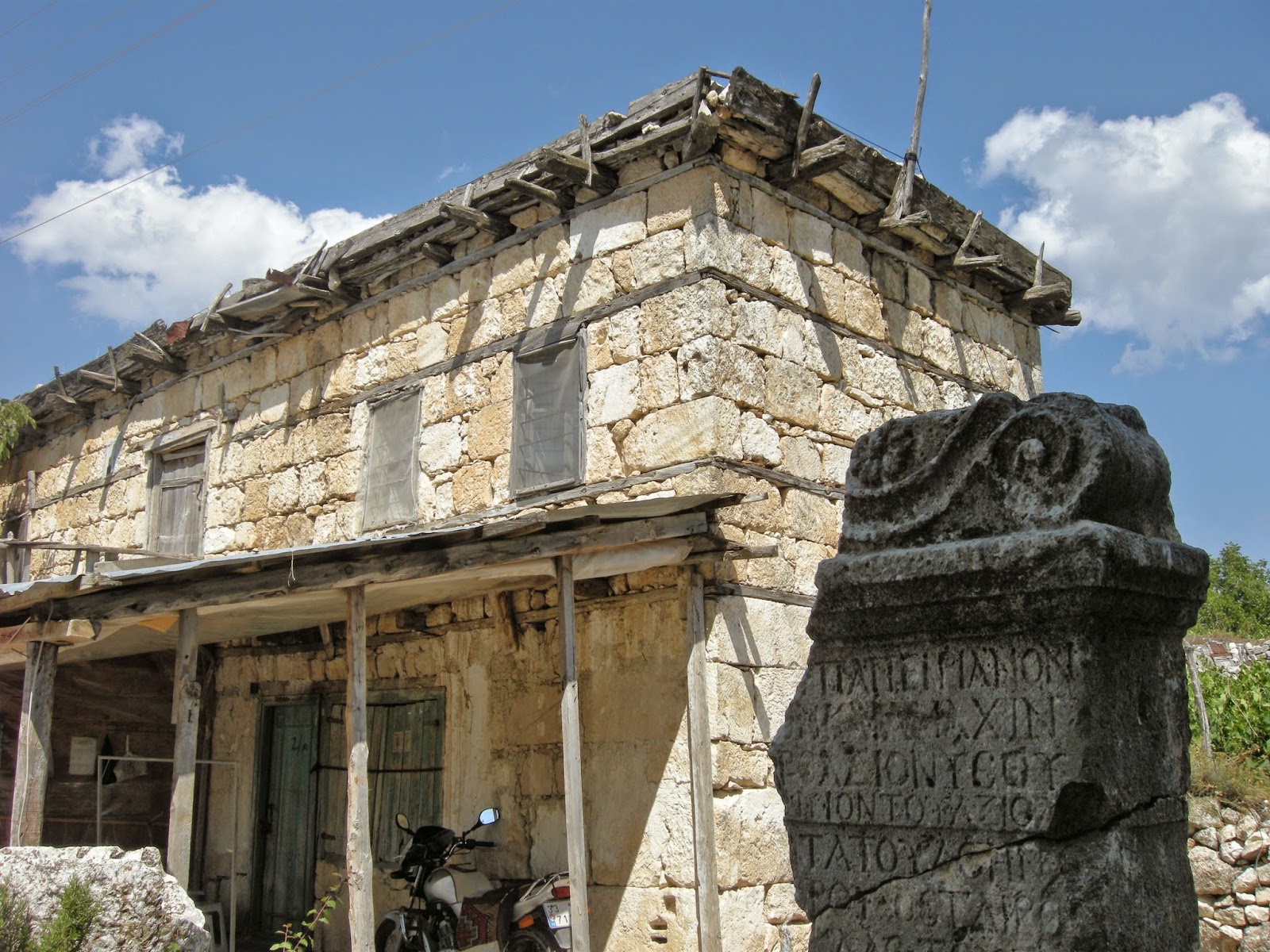 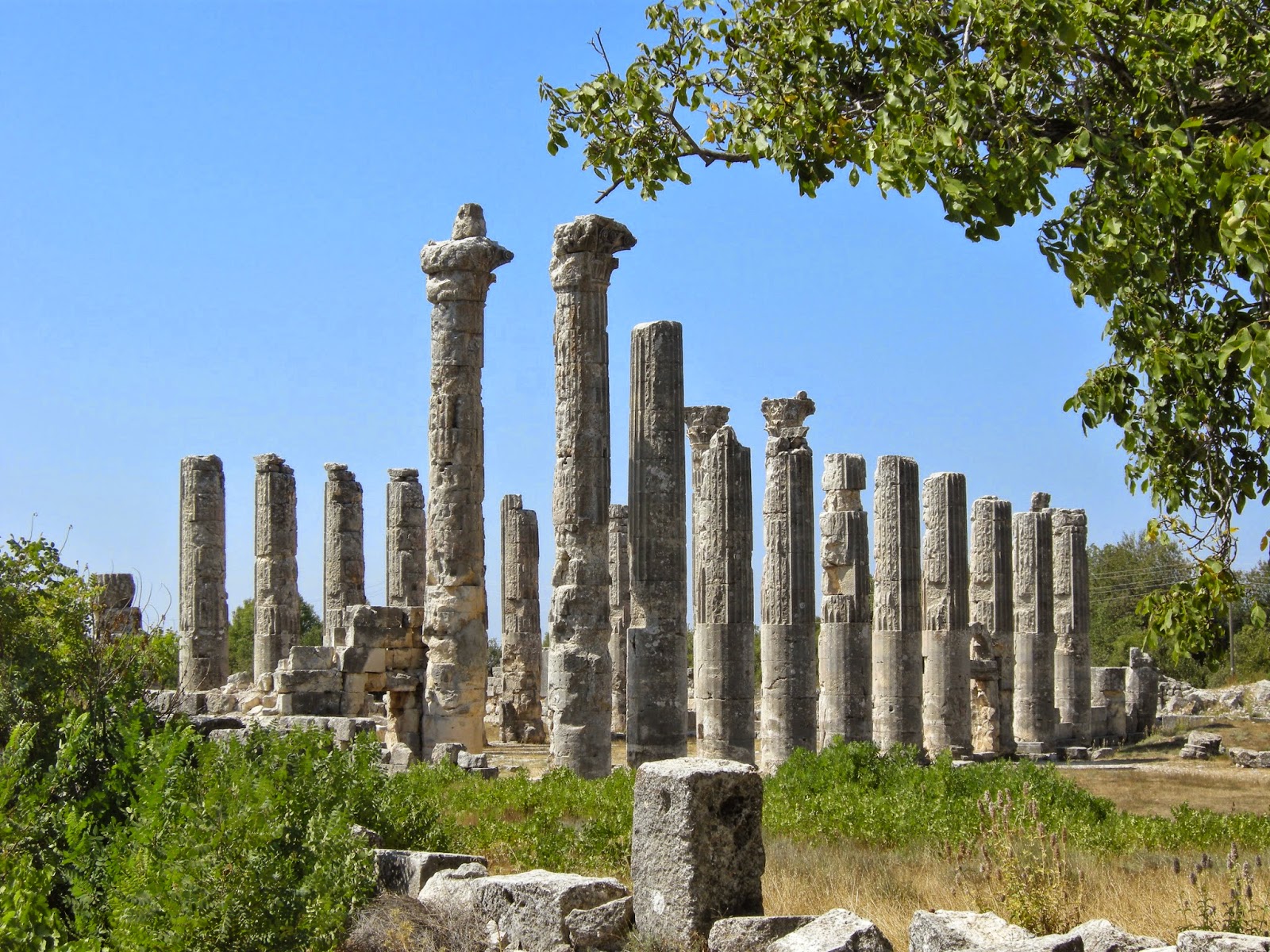 Pictured above and below in Dioceasarea, the temple of Zeus Olbios (Temple of Jupiter), 6 by 12 columns, four of which still bear their capitals sculptured in the Corinthian style; built in 295 BC, it is the oldest peripteral temple in Asia Minor. 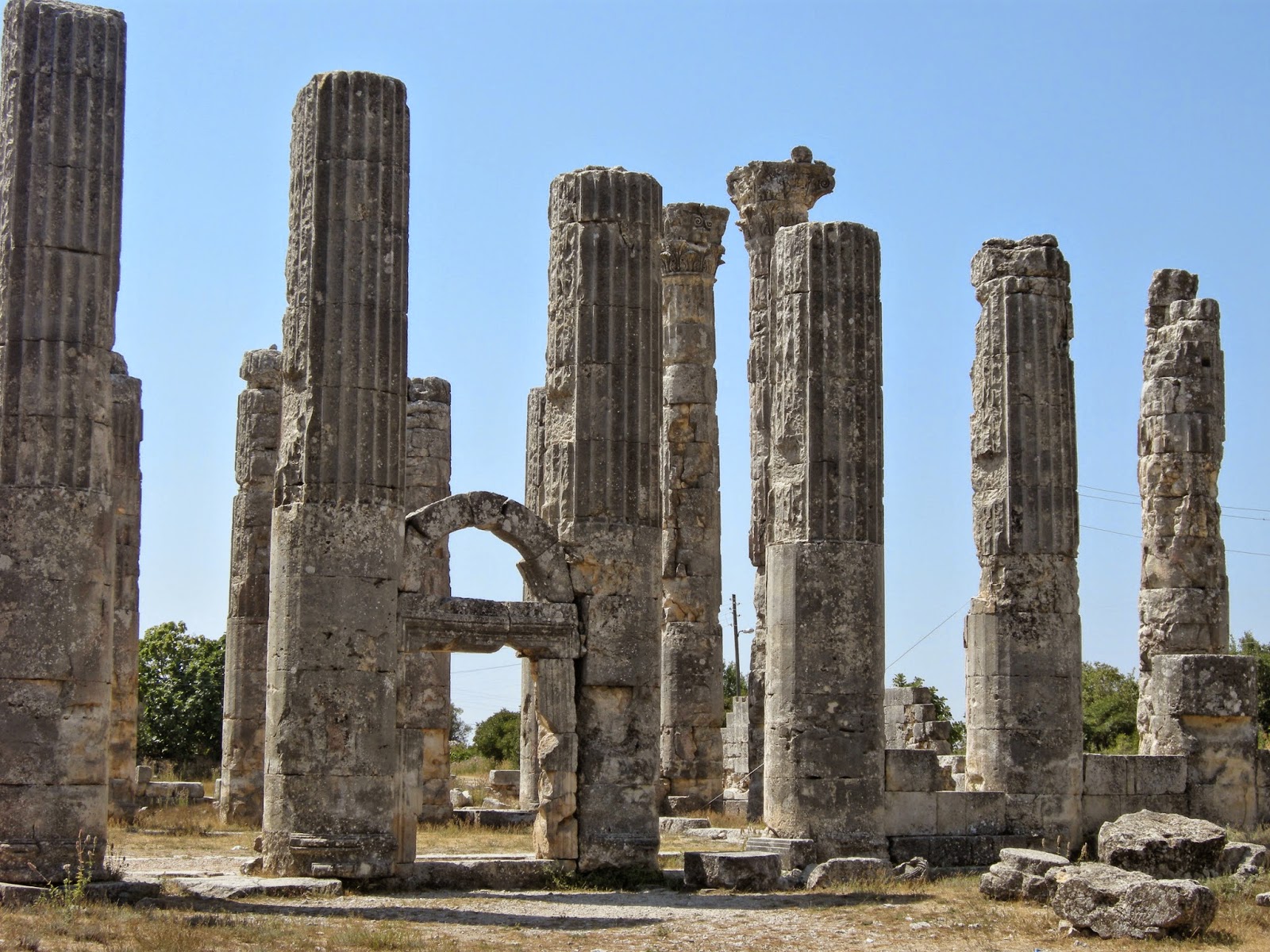 Above, a close-up view of the temple of Zeus from the side, showing where a door was installed when the temple was converted into a church during the Byzantine period. Within the temple sanctuary there is a very unique sarcophagus lid relief of three persons, two of the persons are holding the upper arms of two other as to comfort them (pictured below). 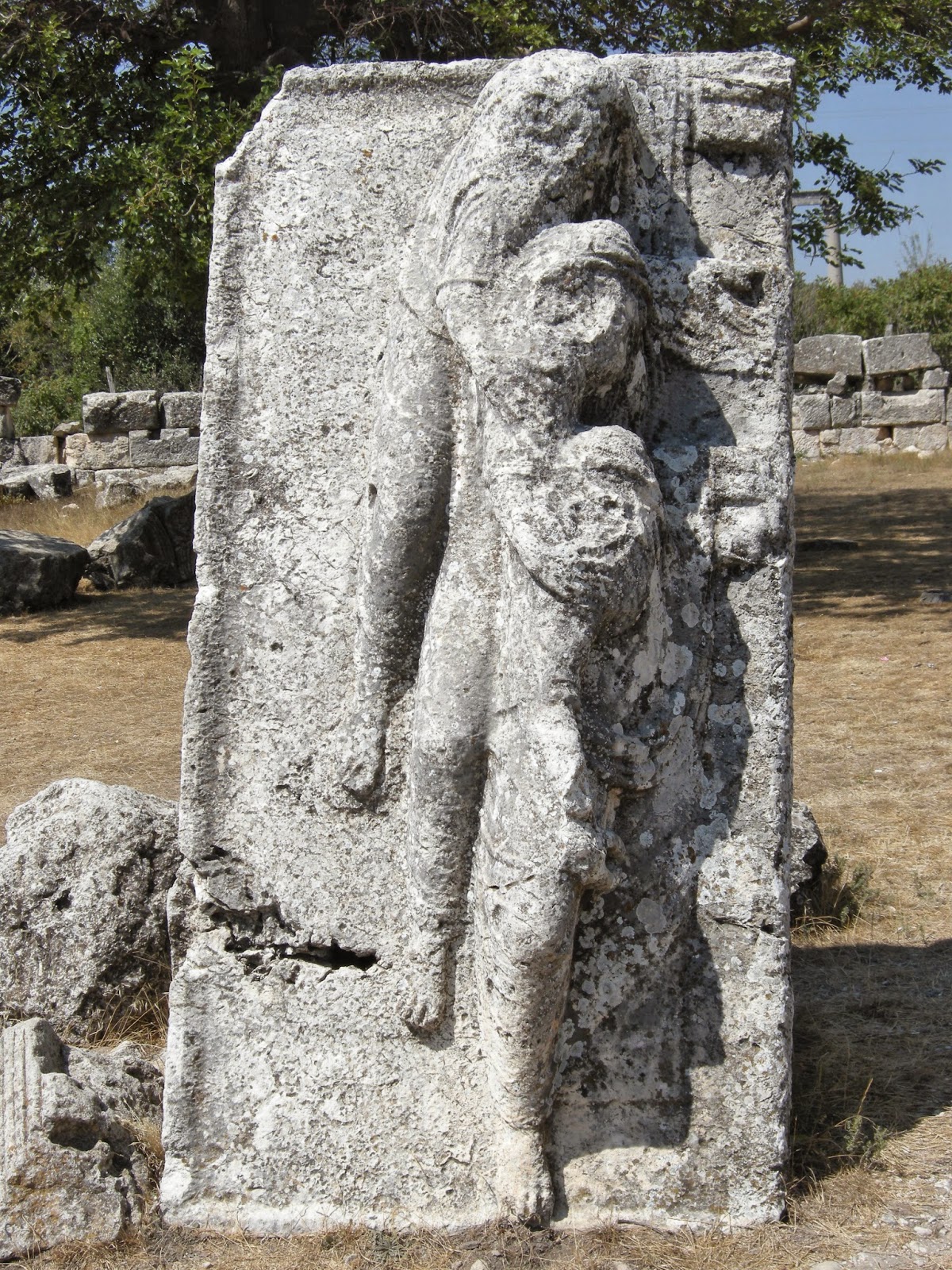 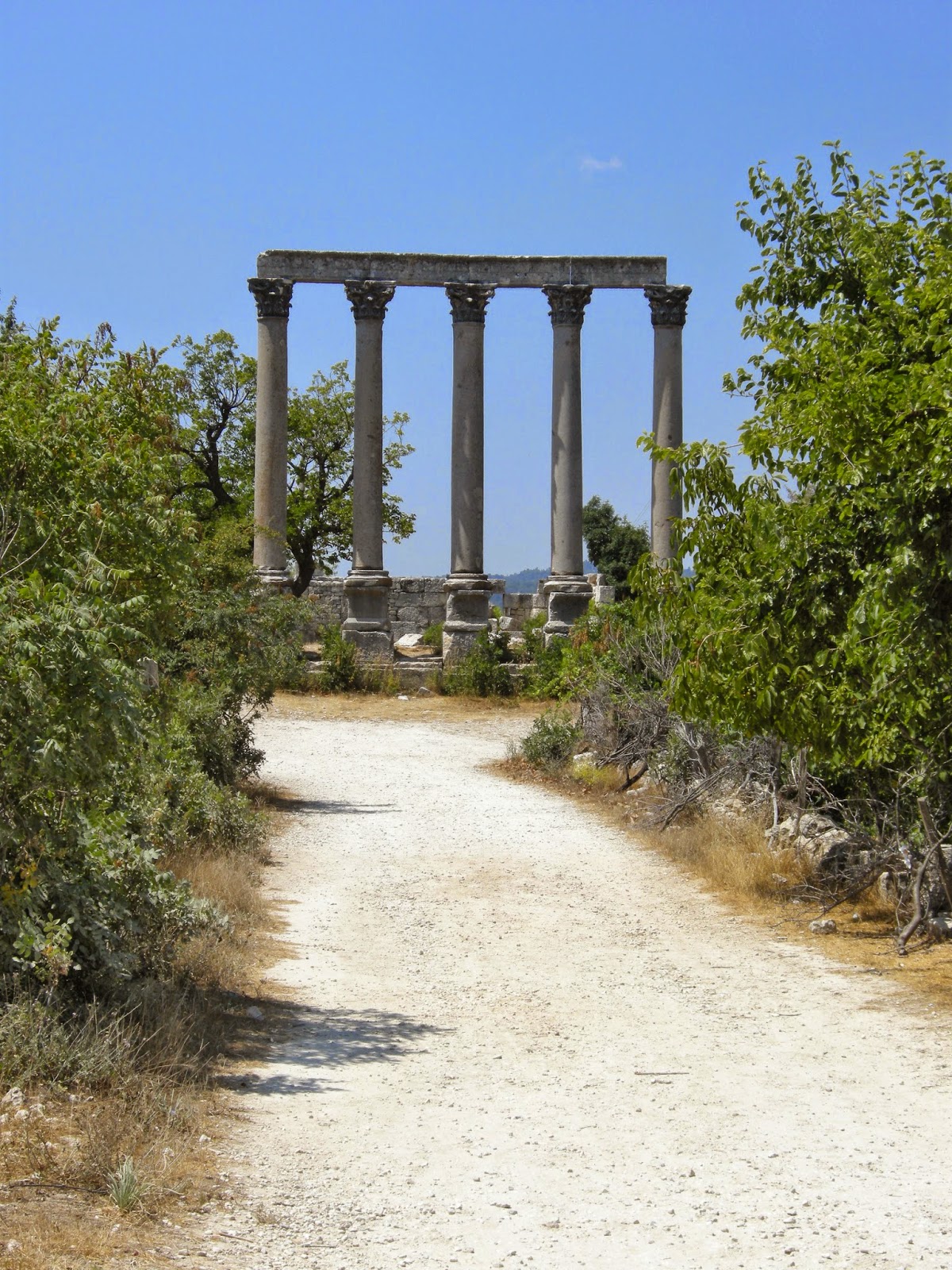 Walking further down the central colonnaded street, you come to the temple of Tyche, which has five of its original six columns standing and crowned with Corinthian capitals (pictured above and below). 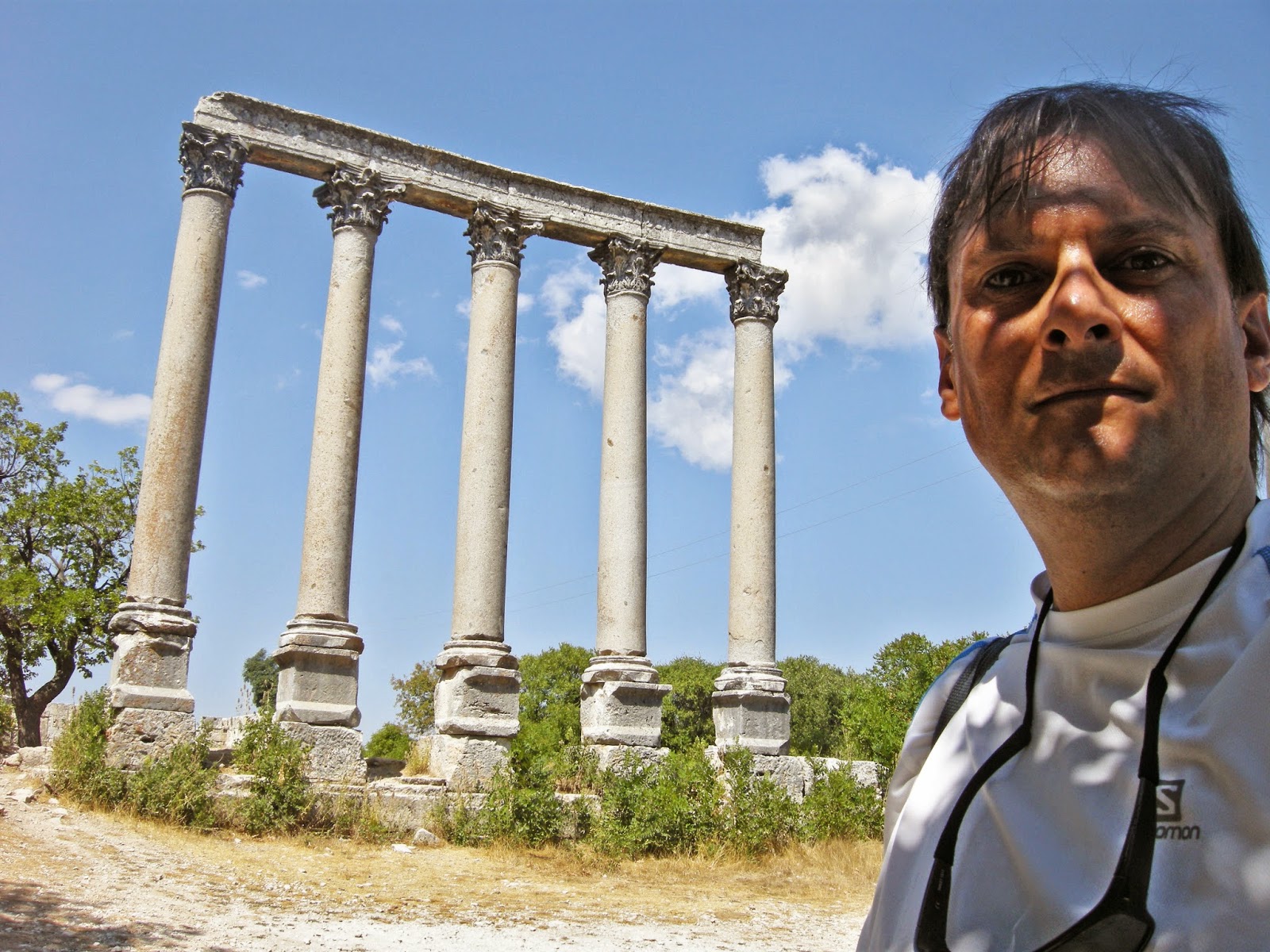 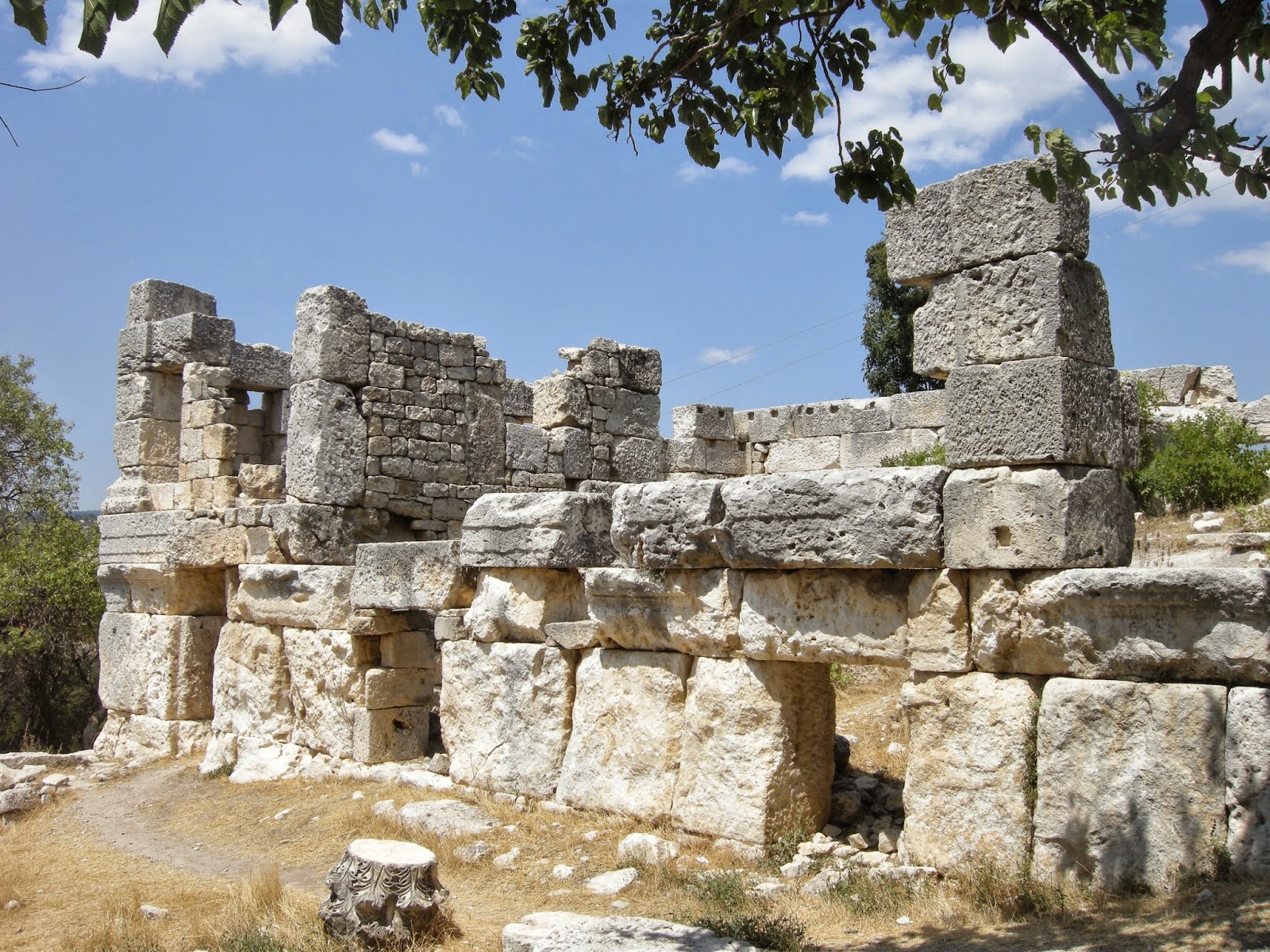 The temple design is extremely unique and rare, as the cella (the chamber that houses the cult statue) sits outside the square plan of the temple some 34 meters behind (pictured above, outside the back of the chamber and pictured below, underneath the chamber). 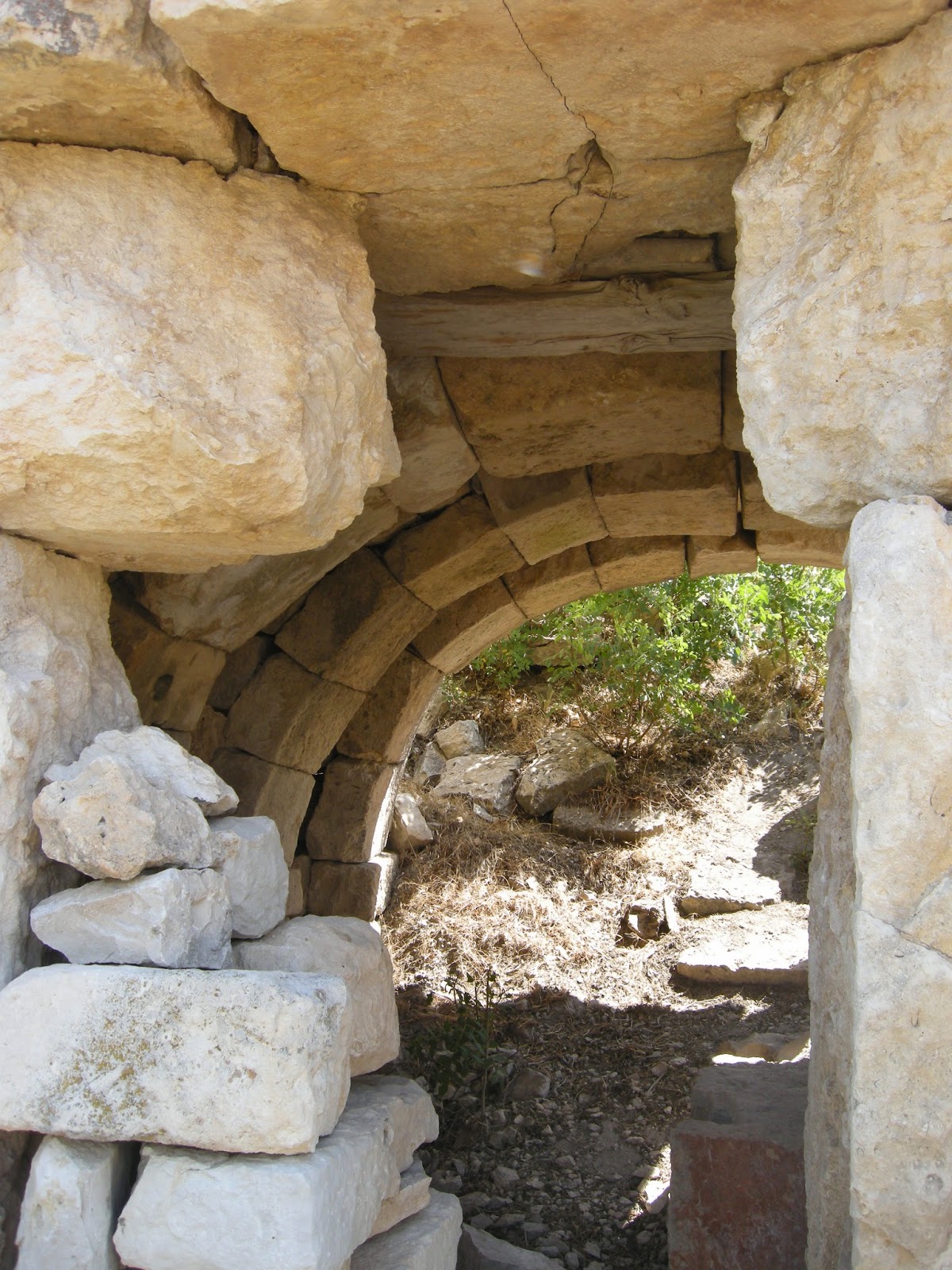 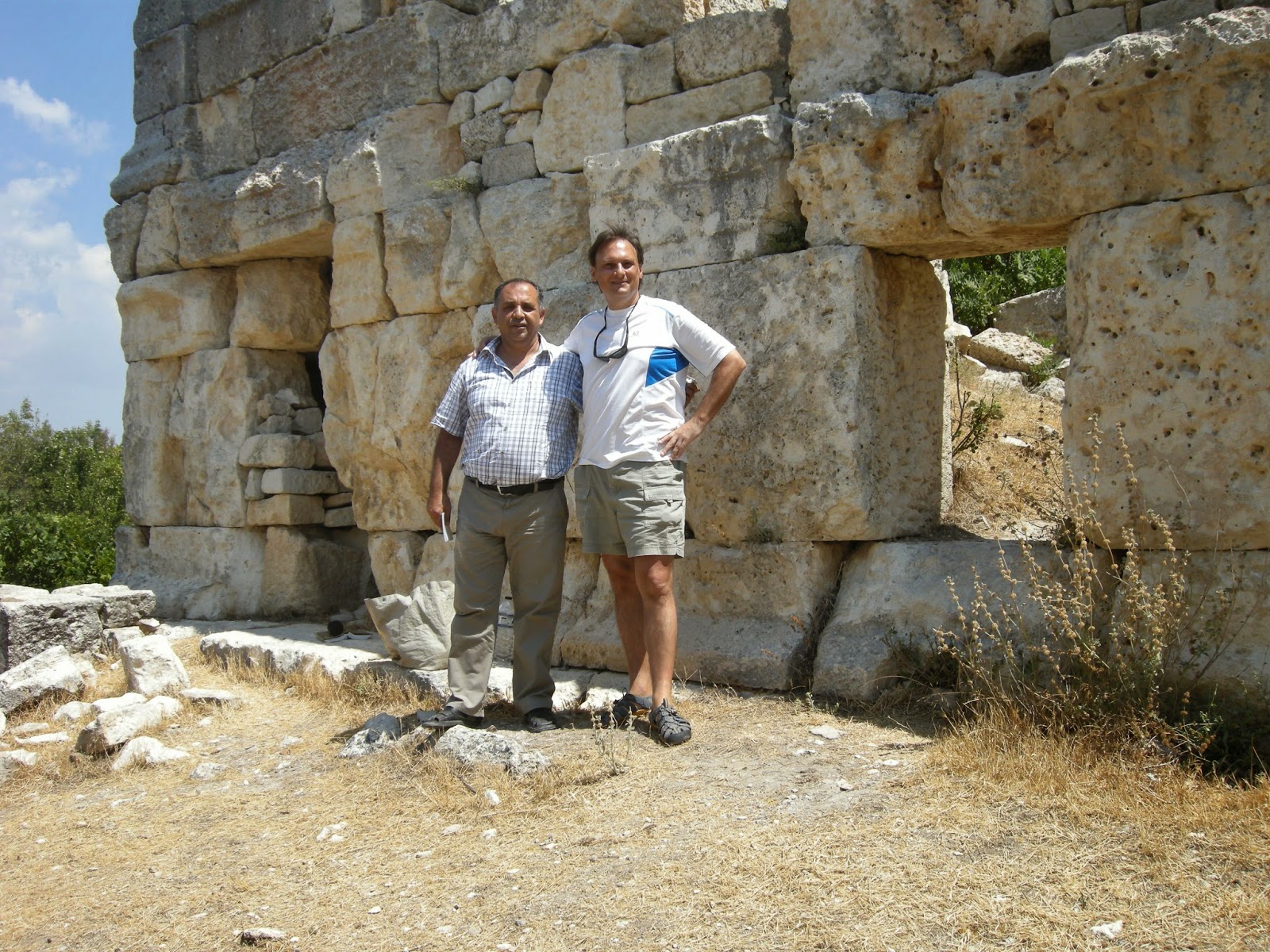 As I was sitting in the shade at the back of the chamber of the temple of Tyche writing a poem, two gentlemen saw me and inquired where I was from and what I was doing.  We spoke for a long while (pictured above), and eventually (after fully exploring Diocaesarea) they insisted that I join them to see ancient Olba, which is connected to Diocaesarea, about seven kilometers down the road.  Diocaesarea was the religious and sacred center for the city of Olba. 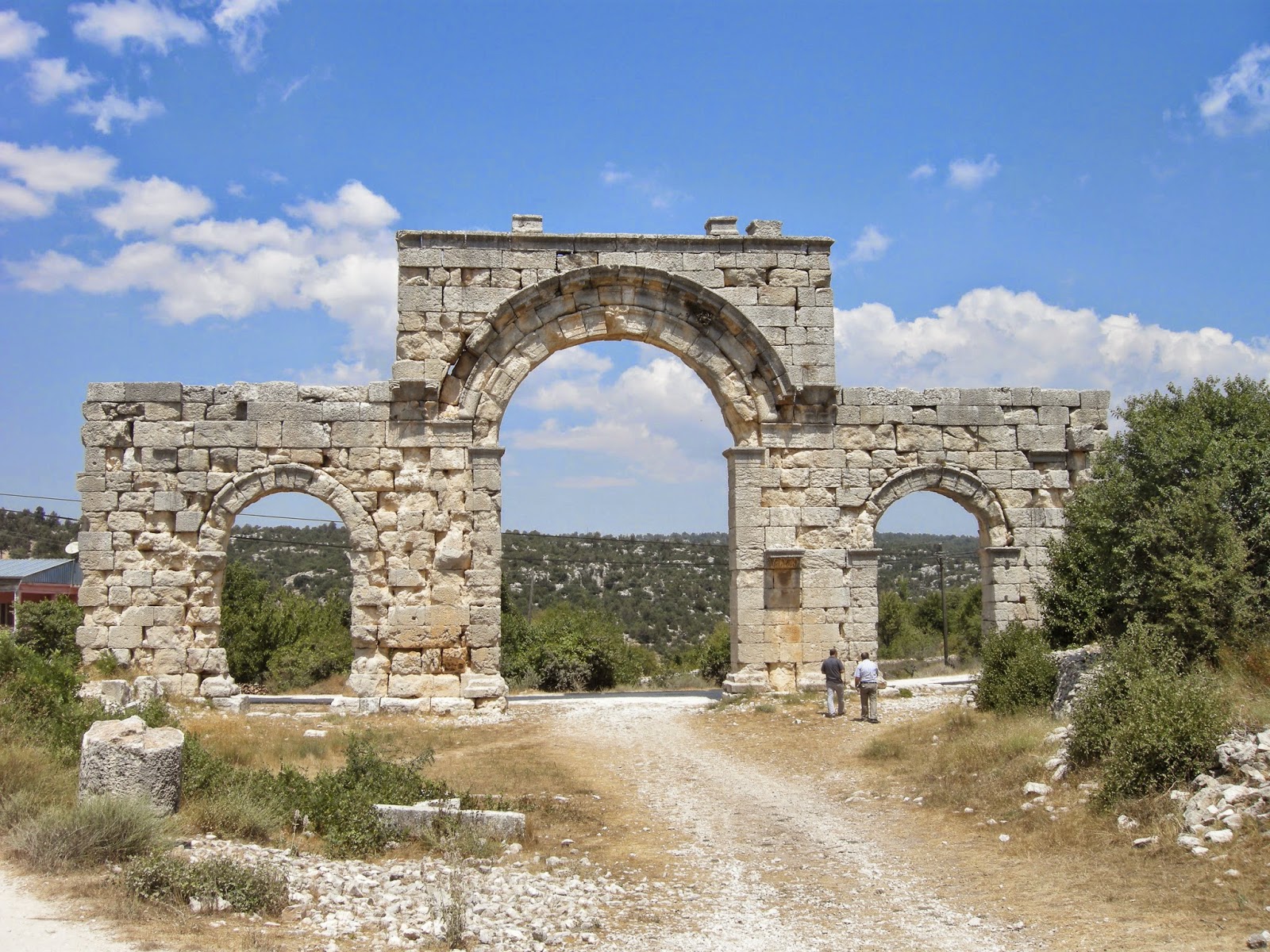 A second colonnaded street to the right of the temple of Tyche leads to the monumental City Gate (pictured above and below), built under the co-reign of the emperors Arcadius (395-408) and Honorius (395-423) in Constantinople, which has three arched entrances with consoles that held Roman statues.  The gate bears an inscription that mentions the name "Diocaesarea", and the emperors and dates that reigned during it's construction. 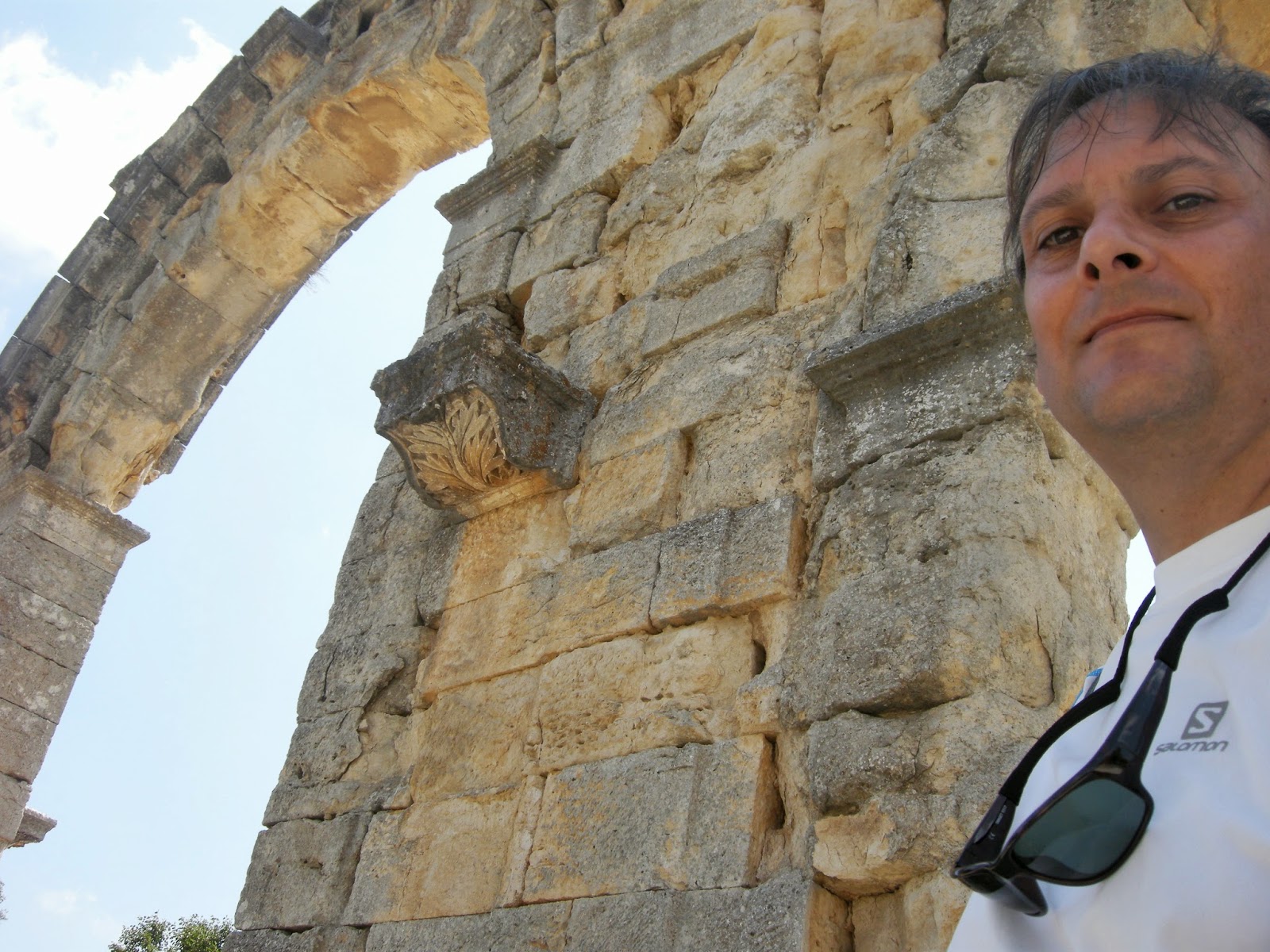 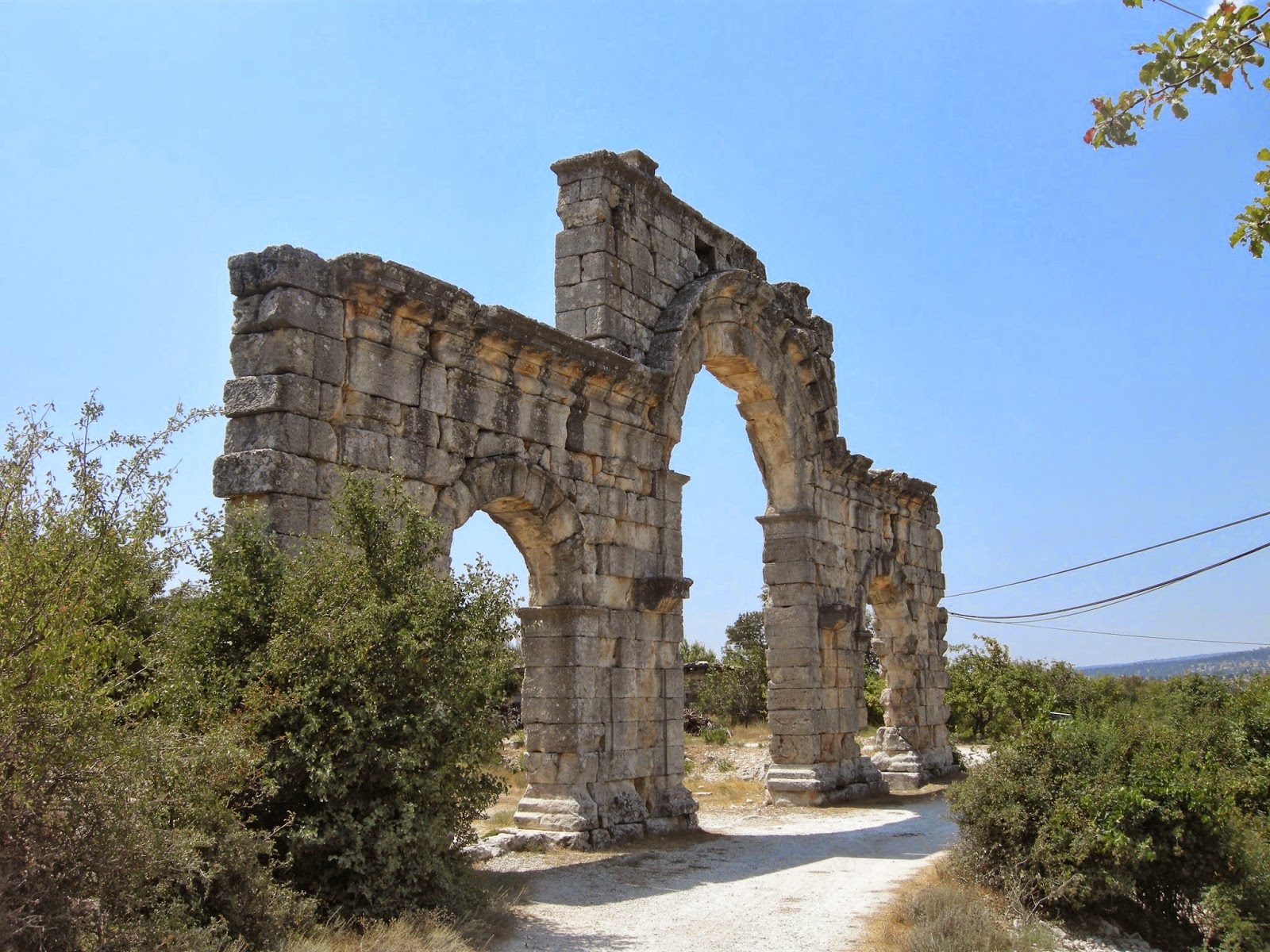 Continuing along the road outside the City Gate and through the village of Uzuncaburc, you come to the High Tower, which according to an inscription on the tower, was built by Tarkyares, the son of the priest Teukros. 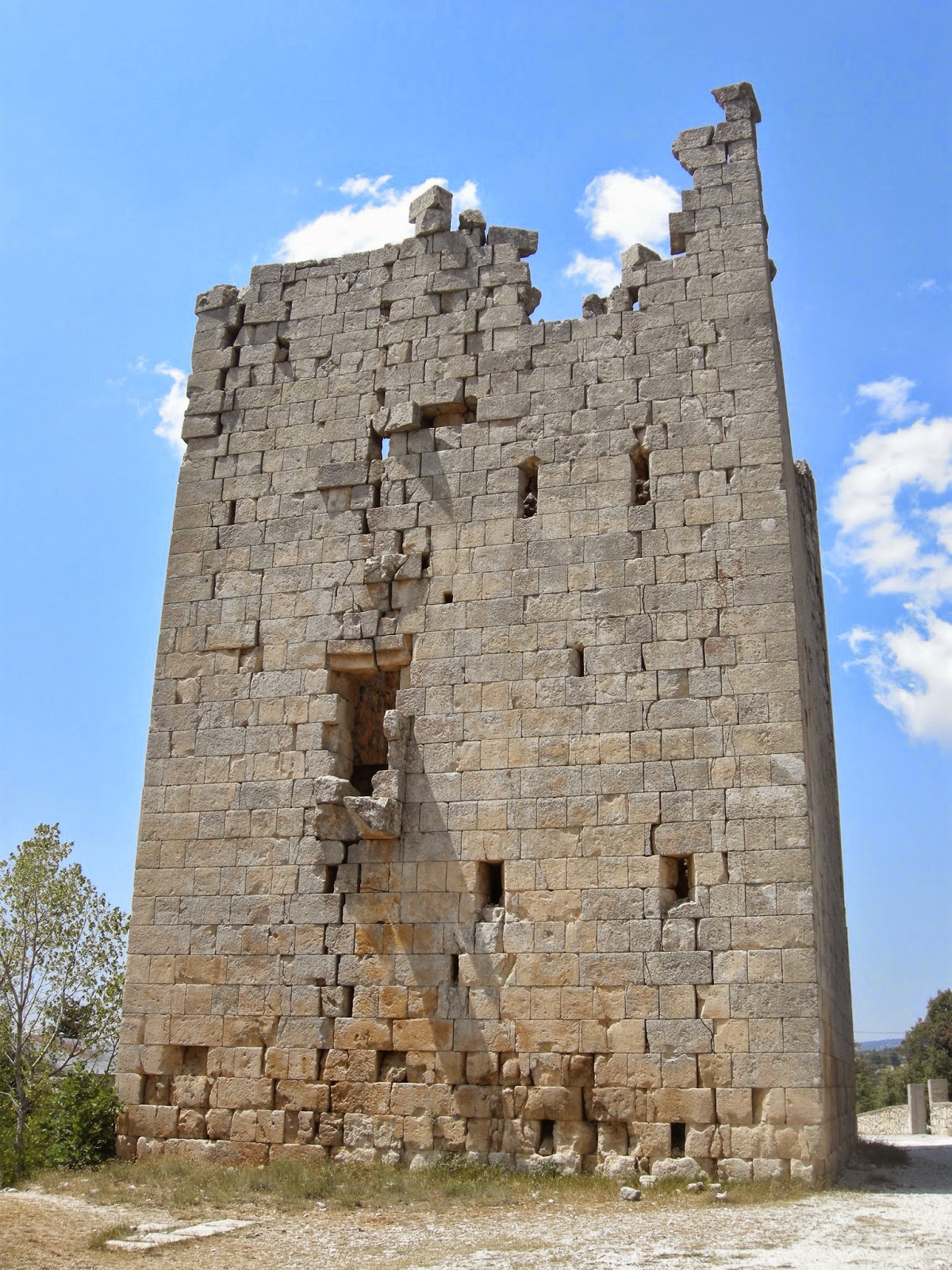 The Hellenistic tower was most likely built the late 3C BC to the early 2C BC, and was a part of the city wall and a gate of entry into the city.  The inner tower contained five wooden floors which were further subdivided.  The balcony (pictured above) at 6 meters high would allow access in and out of the city without opening the gate. 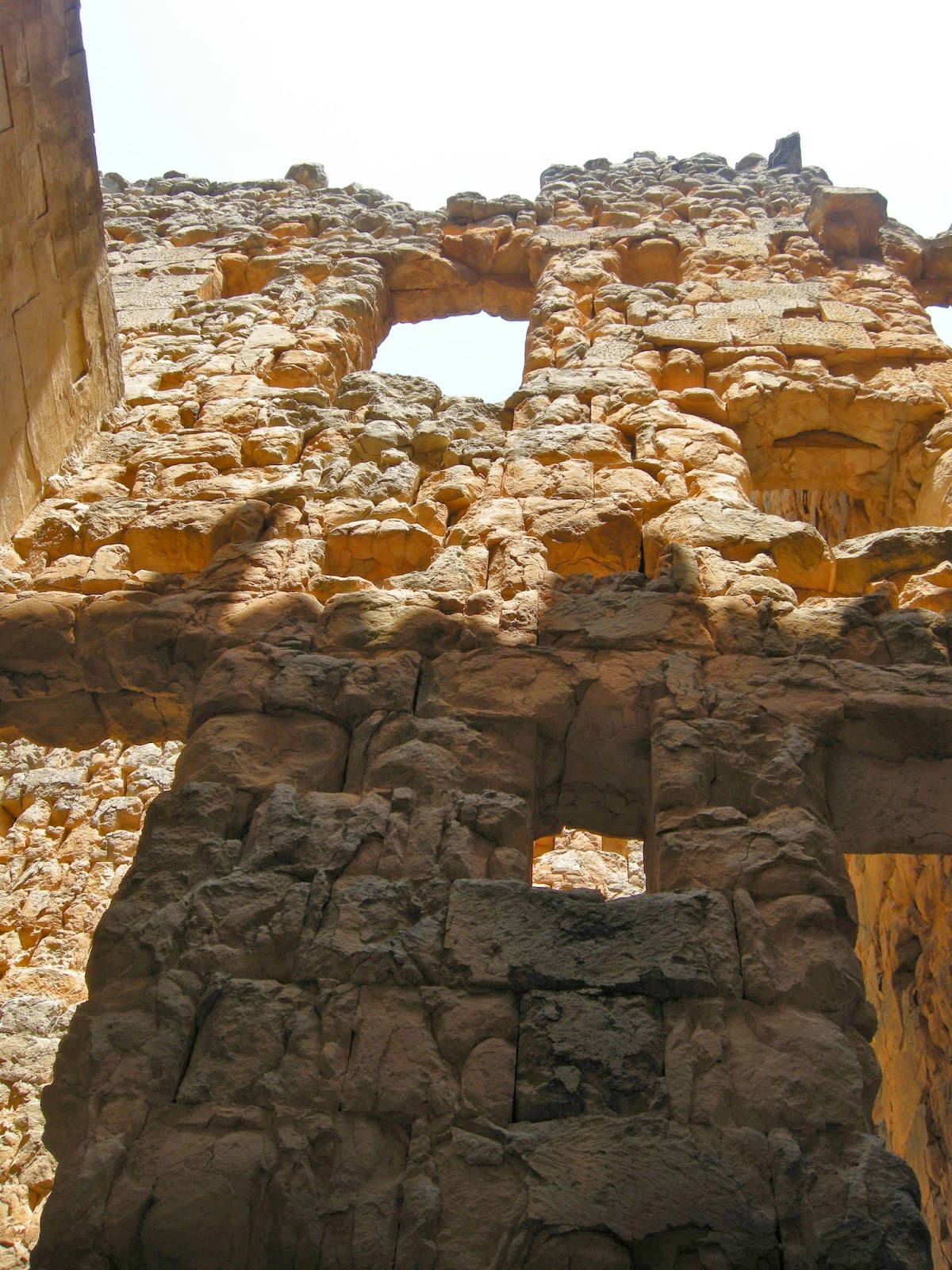 The tower could be used as a watch tower and to protect the temple treasures from bandit attacks and pirates. 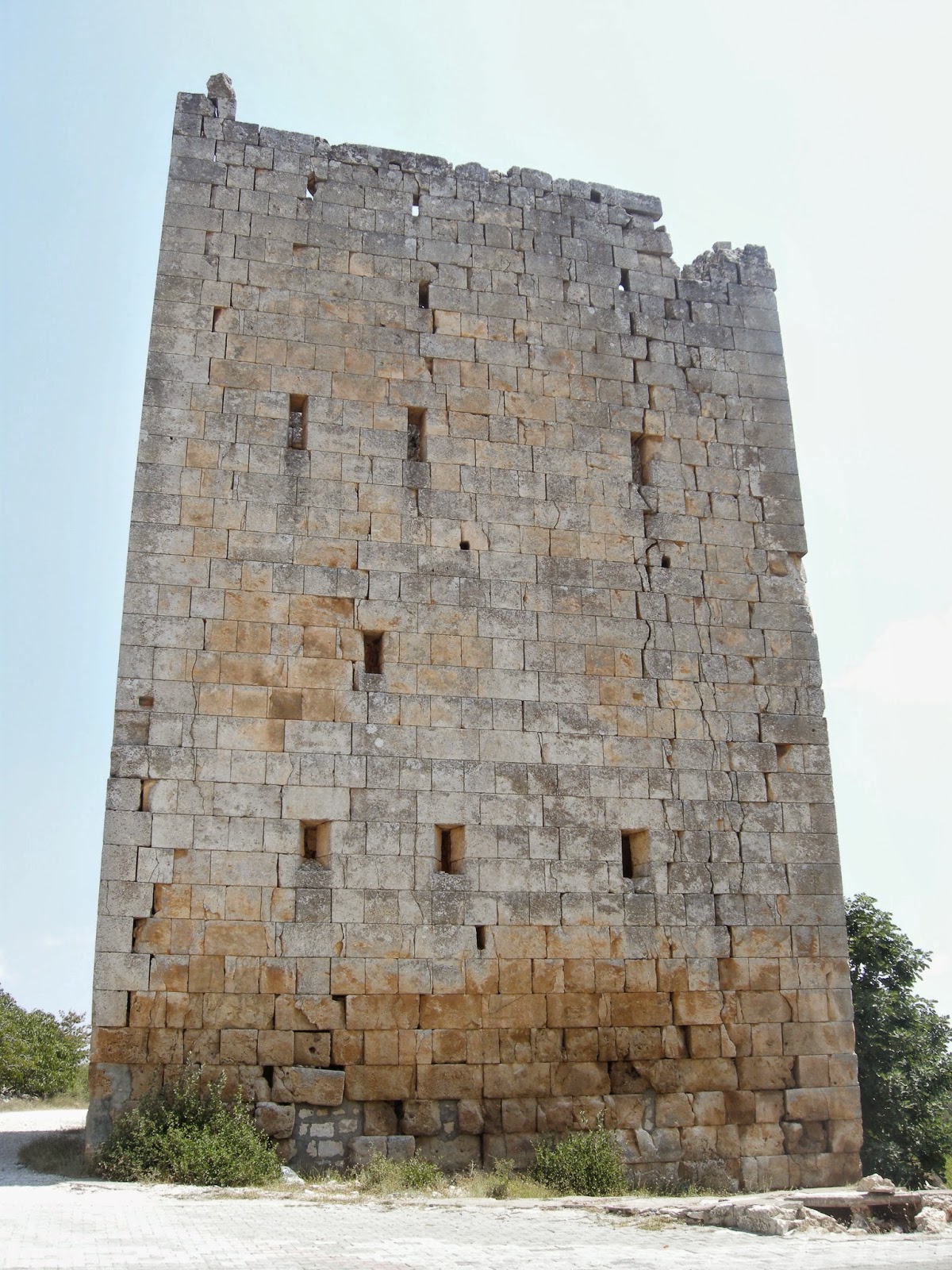 The theater of Diocaesarea was constructed under the co-reign of the Roman emperors Marcus Aurelius (161-180) and Lucius Verus (161-169 AD) and lies at the beginning of the central colonnaded street that lead through the Parade Gate. 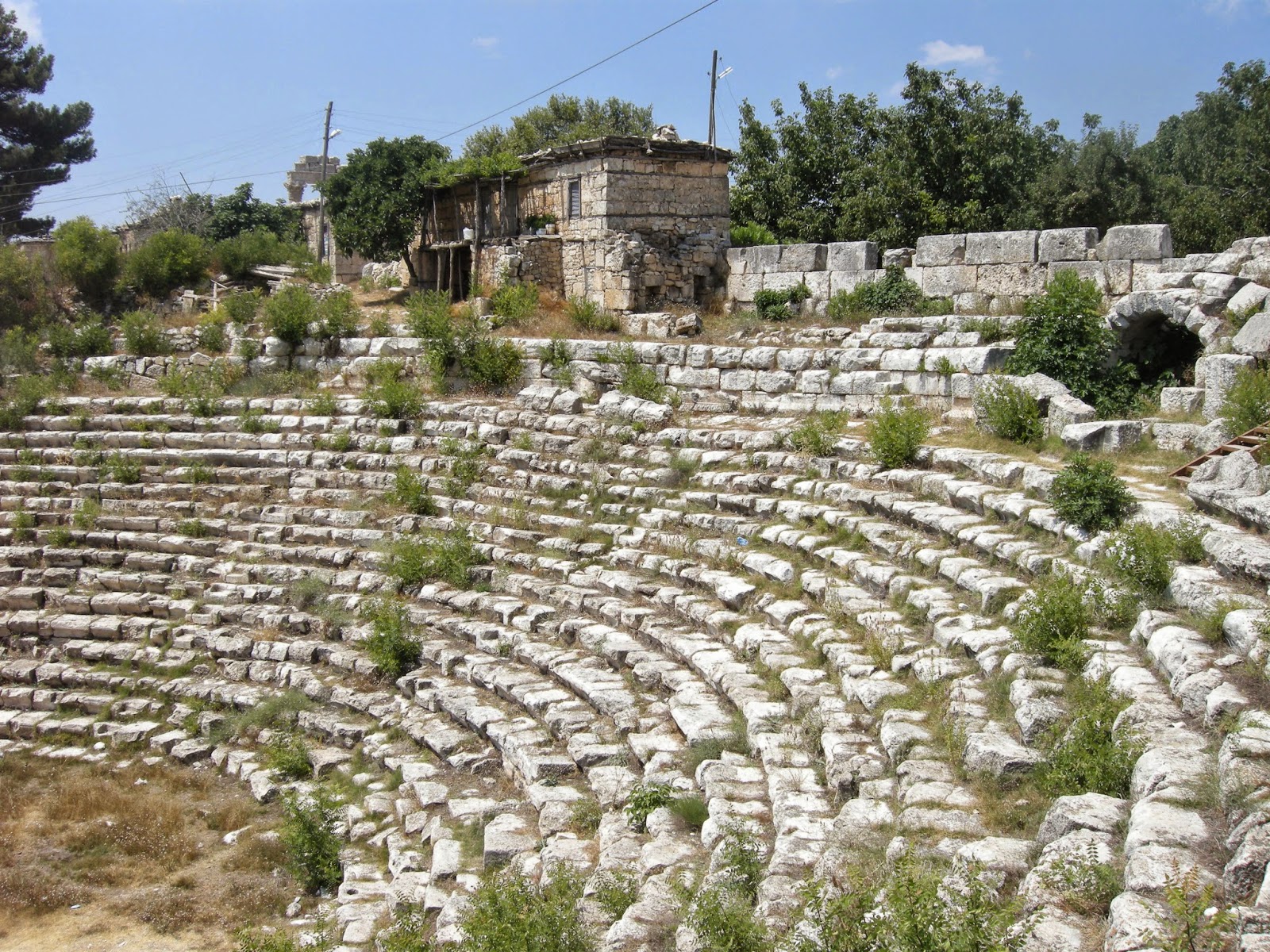 As with the theater at Hieropolis Kastabala, the orchestra and lower cavea are buried under accumulated earth. 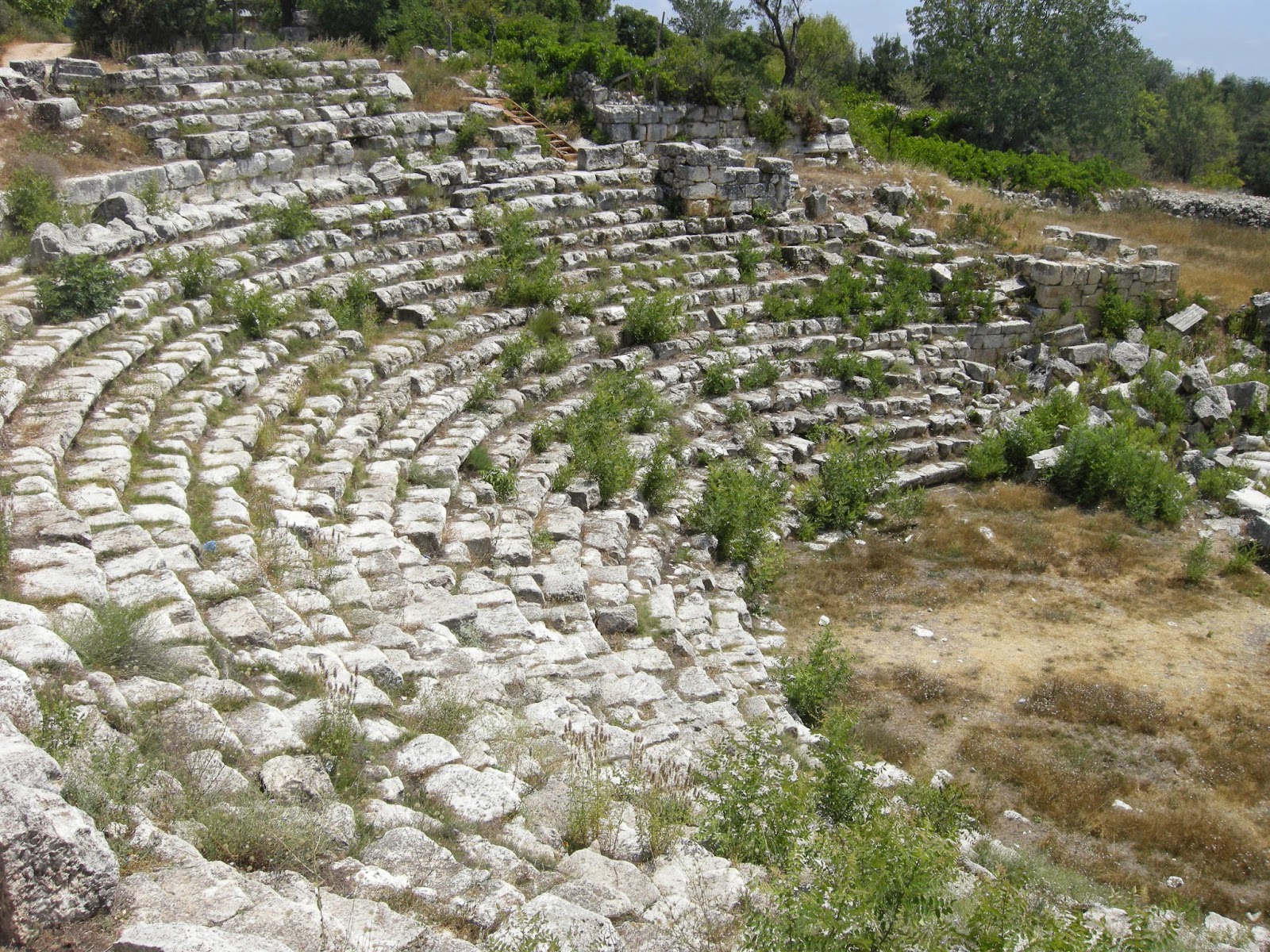 Posted by BIKE CLASSICAL at 3:26 AM