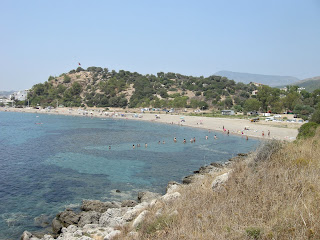 It is not exactly clear who was responsible for the founding of this Ionian city, whether it was Andraemon, son of Codrus, as reported by Pausanias, or, by Andropompus, which is according to Strabo.  What can also not be assured, is whether the site was previously occupied by Carians, or, by Lydians under the name of Artis.  Pictured above, a photo of the Acropolis in the distance rising above the beach, taken from walled peninsula of the ancient city. 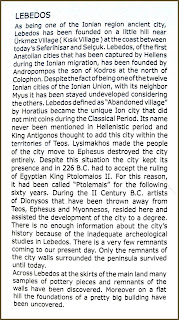 The history of ancient Lebedos appears to have been mired by the greater success of nearby cites, ancient Teos to north, and Ephesus to the south, not to mention Notion, aka, Kolophon by the sea.  In 304 BC, Antigonus I Monophthalmus attempted to join Lebedos with Teos, but was eventually thwarted by Lysimachus, who in 292 BC, moved the bulk of the population to Ephesus.  Pictured below, I view of the walled peninsula from the Acropolis. 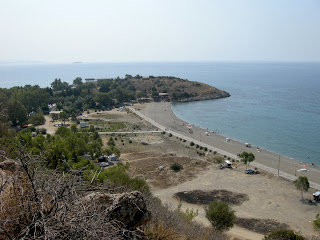 Though the city was partially destroyed during this forced migration, it would continue to be inhabited, eventually coming under the rule of Ptolemy III Euergetes, and a new name, Ptolemais.  The city fared better under Roman rule, and also became famous as the temporary home of the Artists of Dionysus, who had been exiled from Teos, kicked out of Ephesus and nearby Mysus, and perhaps Notion as well. 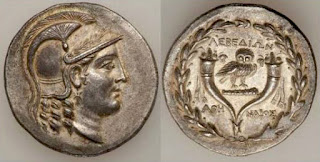 As mentioned in the history of ancient Lebedos above, classical era coinage from the city have not been found, however, Hellenistic era coins do exit (pictured below).  This coin was minted in Lebedos between 160-140 BC, and depicts the head of Athena wearing a crested Corinthian helmet on the front, while on the obverse side, an owl clasping a club with its talons stands between two crossed cornucopiae, all within a wreath. 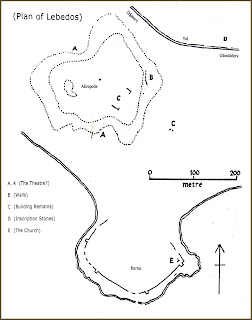 Ancient Lebedos is located amongst the houses of the village of Urkmez in Izmir province (Coordinates 38°4′41″N 26°57′53″E).  As can be seen in the illustrated city plan of the ancient city above, there are two main areas, those being the walled peninsula that juts out into the sea, and the acropolis. 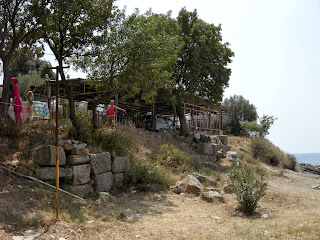 There is a lone sign with the scant information and illustration of the city plan (pictured above) standing in an unextraordinary location along the street within the village.  Lebedos has yet to be excavated, and therefore, any remaining antiquities are mostly below the surface.  I decided to circumnavigate the protective wall that encompasses the whole of the peninsula (pictured above and below). 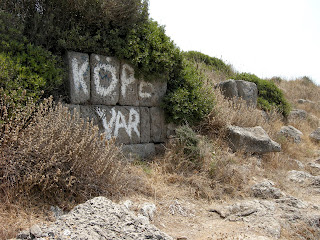 The ancient wall surrounding the peninsula is in fair to excellent condition, though it must tolerate the encroachments of holiday making tourists, their temporary constructions and, their buckets of paint! 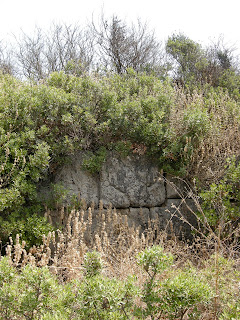 The interior of the peninsula is extremely overgrown, and who knows what treasures are hidden beneath the shrub brush?  The wall itself rises mightily above the sea, and so it should, as over the millennia it has had to hold back pirates, naval forces and the sea. 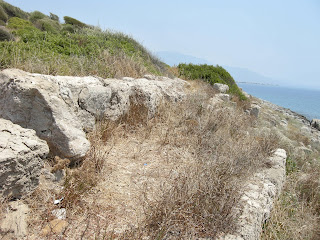 Continuing around the peninsula, I couldn't find any remnants of an ancient port, though there must have been one.  That said, part of the reason it was so difficult for ancient Lebedos to prosper was because it lacked a protected bay. 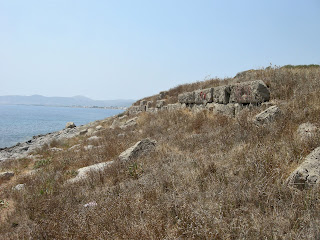 Following my exploration of the peninsula, I headed for the Acropolis (pictured below).  I imagine that a theater must exist somewhere around the slopes of the acropolis, but unfortunately there are few signs of such a building. 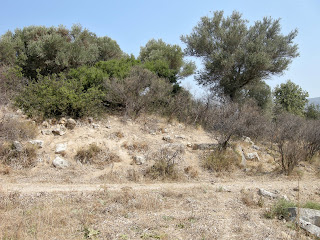 Though from a distance, the acropolis does not seem so high, however, the slopes build slowly until the height reaches a quite substantial level.  Pictured below, a view back down the slope with some antiquities breaking the surface, and the walled peninsula at the far end of the beach. 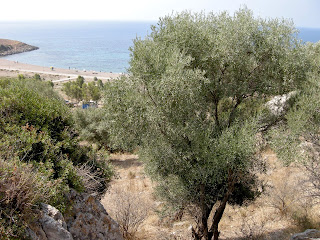 The top of the Acropolis is quite flat once the rolling slopes are conquered, and there would appear to be support walls surrounding sections of the Acropolis built in order to keep terraces that were built upon.  These walls most probably served a dual purpose as well, that of defense. 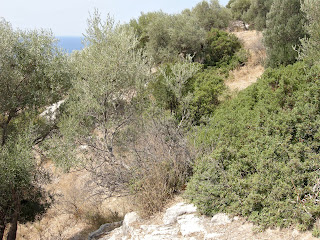 The wall or walls surrounding the Acropolis usually disappear underground and into overgrown brush, but there certainly is more to this accent site than meets the eye. 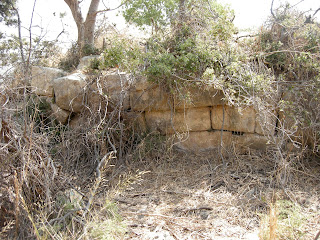 The section of wall pictured above and below appears to end (right side of photo) at what may be an entrance gate to the Acropolis.  In the photo below, we can see what appears to be a square trapezoidal wall (left of photo), that ends in a Lesbian or Hellenistic polygonal wall.  This would lead us to suspect that the wall saw various constructions and reconstructions over a lengthy period of occupancy. 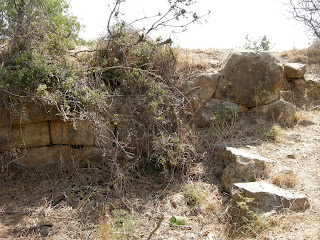 As can be seen in the photo below, the so-called Gate or section of the wall beyond where the polygonal blocks end goes subterranean, leaving these blocks just peaking above the surface.  It is highly probable that the upper section of the wall was removed here in order to allow vehicle access to the acropolis. 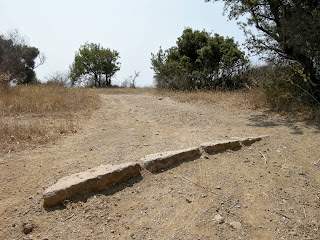 The massive stone slabs pictured below are the remnants of a very large building.  How they ended up in this position, and if this is the location of the building will not be known until the site is excavated. 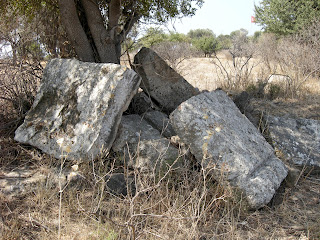 It goes without saying that this ancient city is not the reason tourists come to the area.  As a matter of fact, I am guessing that most sun bathers and sea worshipers have no idea that they are in the midst of an ancient city. 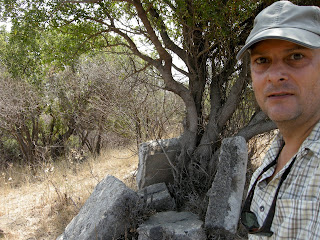 I suppose I took more than a couple pictures of this heap of stone blocks as antiquities at this site were so sparse.  That is not to say that exploring the site was anything less than exhilarating! 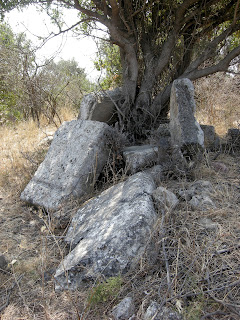 I think it's fair to say that the reliefs on the building members that can be viewed at the site are not of the highest quality, but that should be used to determine the quality of the workmanship on the antiquities that remain below the surface. 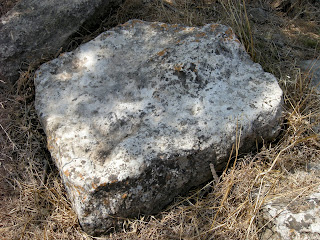 Pictured below, an odd stone block, which appears to sit in situ, may be part of a rather massive building, the remains of which remain under the surface. 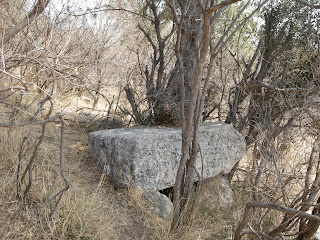 There are building members, stone bases and oddly placed blocks poking above the surface of most of the Acropolis. 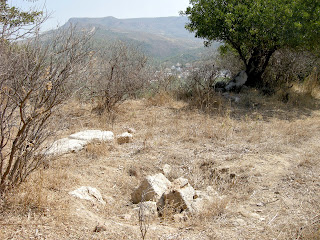 With tens of thousands of such unexcavated sites throughout Turkey, it would take the will power of a nation to exhume these treasures from their graves. 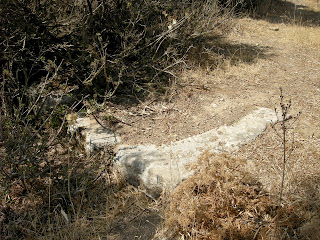 Around every tree, beneath every bush and shrub, small pieces of the puzzle expose themselves. 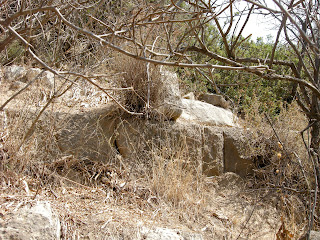 It would probably take a team of excavators less than five seasons to complete an electrical resistance survey of the acropolis and the walled peninsula and, do enough digging to give a nearly complete picture of the ancient city, while at the same time discovering some wonderful treasures. 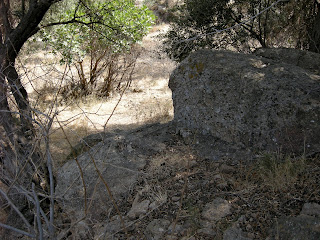 Lebedos appears in ancient documents beginning around 750 BC, and is written about through around 640 AD.  Perhaps its early demise as a populated city bodes well for future excavators, as this long forgotten site may still hold most of its treasures under ground, meaning, that the site may not have been heavily quarried over the millennia. 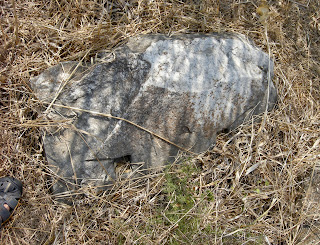 Why would such a perfect stone block such as the one pictured below escape the interests of those who could find use for it in some other structure? 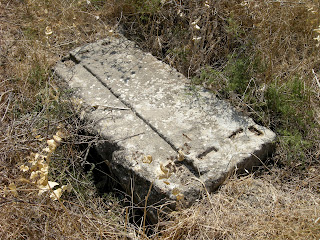 I never did locate the Theater, and perhaps that is one monument that did not escape the hands of those in need of easily acquired building materials.  I am afraid that we will not know any time soon, as ancient Lebedos does not seem to garner a whole lot of interest among the academic community, who have bigger fish of fortune and fame to fry. 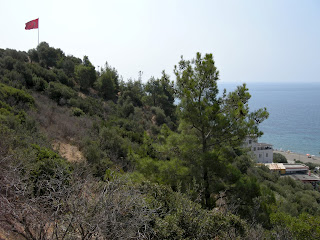 https://www.patreon.com/bikeandsailclassical
Posted by BIKE CLASSICAL at 4:14 AM