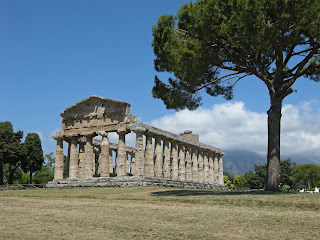 According to Strabo, Paestum (aka Poseidonia) was founded by Achaean colonists fleeing Sybaris. Above, the Temple of Athena (also known as the Temple of Ceres), was built in the 6th century BC, and modified around 520-510 BC.  It is a peripteros (surrounded by a single colonnade), Doric temple. 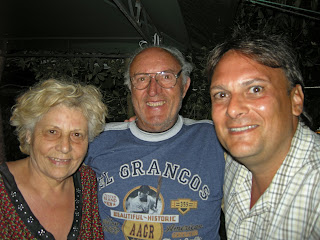 The night before I left Minturno for Napoli, I enjoyed some homemade frozen lemon cello . . . , it was about 45% alcohol . . . delicious!! 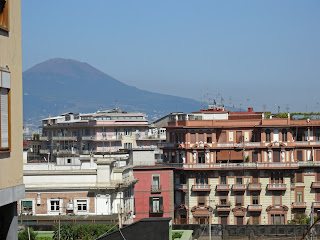 Napoli is about a 60 km bicycle ride from Minturno, and this picture of Mt. Vesuvius (above) was taken from my bedroom window at the hostel Mergelina. 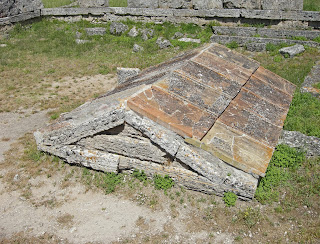 Above and below is the Heroon, a sacrarium which the Greeks dedicated to the founder of the city, who was worshipped after death as a divine hero. The structure was buried after the Romans took control of the city and renaming it Paestum. Bronze vases from within the structure were still full of honey when excavated, and are masterpieces of metal-working. 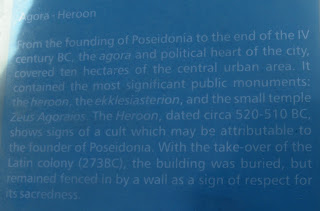 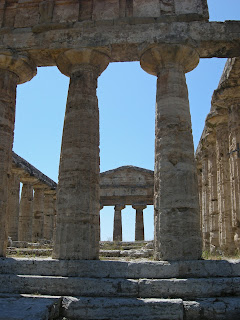 Above, another view of the Temple of Athena. 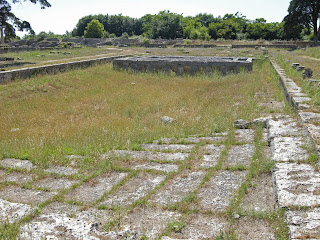 A Roman build swimming pool (above) in the Roman sector.  The pool even features a downward gradient for entry (from bottom right of photo). 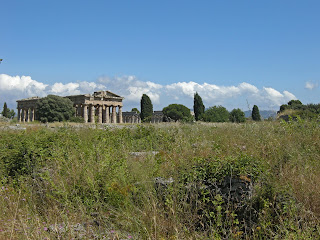 A view of the Temple of Neptune from the road leading to the ancient port. 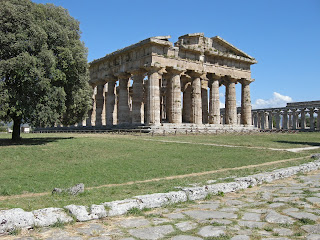 The second temple to Hera (dedicated to Hera), (also known as the Temple of Neptune), was built around 460 BC. It has been variously thought of as a temple dedicated to Poseidon. 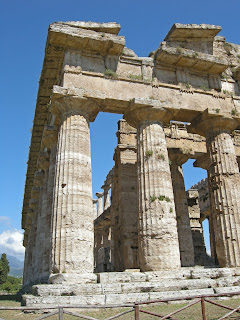 "The temple is peristyle, with 6 x 14 columns, a distyle in antis pronaos, and a distyle in antis opisthodomos. To the right of the cella door, a staircase led to the roof; to the left was a small utility room. Inside the cella, a double colonnade of seven columns divides the cella into a nave and two side aisles. 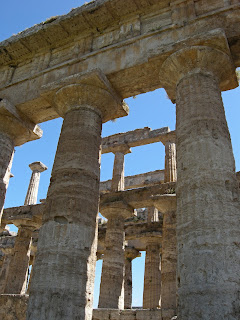 Above the lower colonnade, an upper colonnade of smaller columns helps support the roof. 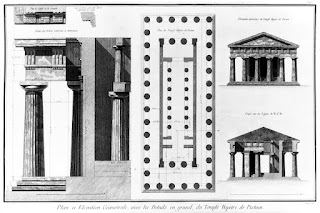 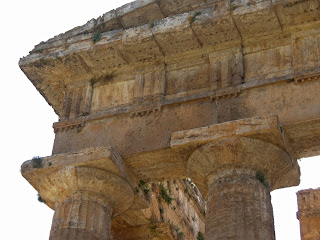 Certain optical refinements are also employed: the stylobate is curved upwards slightly towards the center, to avoid an impression of sagging; the horizontal cornices are also slightly curved; and the columns incline slightly inwards. 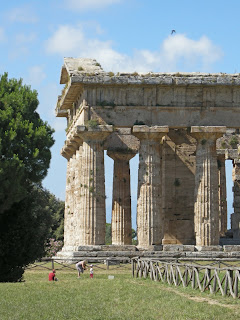 These features suggest that the architect was influenced by developments in mainland Greek architecture." 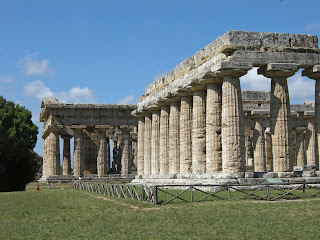 The temple of Hera in the foreground (Neptune/Hera II in the background), is also known as the basilica.  It is the oldest temple in Paestum, built around 530 BC.  Excavations have revealed its actual association with the wife of Zeus, the queen of the Greek pantheon. 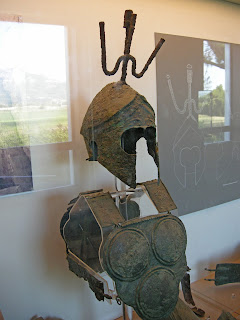 Armor of a Poseidonian solder, found in the tomb of the deceased. 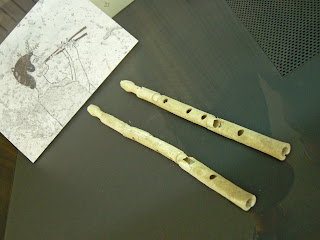 An aulos (Greek: αὐλός, Though aulos is often erroneously translated as "flute", it was a reed instrument, and its sound described as "penetrating, insisting and exciting" was more akin to that of the bagpipes, with a chanter and (modulated) drone. 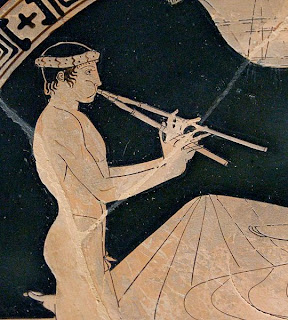 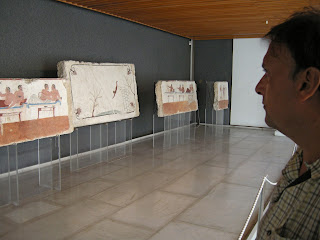 "Paestum is also renowned for its painted tombs, mainly belonging to the period of the Lucanian rule, while only one of them dates to the Greek period. It was found, on 3 June 1968, in a small necropolis some 1.5 km south of the ancient walls. The burial monument was named Tomb Of The Diver (Italian: Tomba del tuffatore) after the enigmatic scene, depicted on the covering slab, of a lonely young man diving into a stream of water.

It was dated to the first half of the fifth century BC (about 470 BC), the Golden Age of the Greek town. The tomb is painted with the true fresco technique and its importance lies in being "the only example of Greek painting with figured scenes dating from the Orientalizing, Archaic, or Classical periods to survive in its entirety." 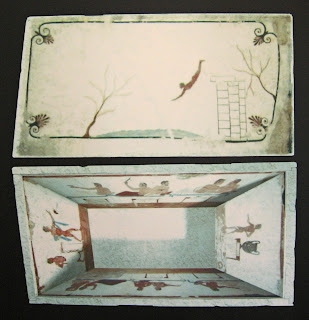 Below, a fine example of a painted tomb. 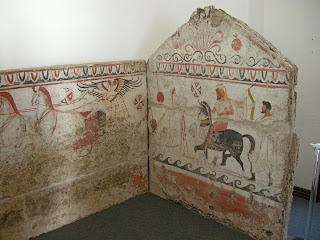 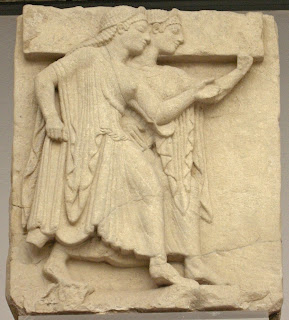 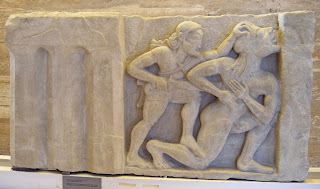 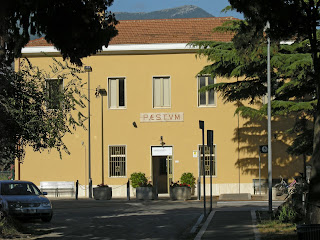 
**If you'd like to help with future postings, please feel free to support them through PATREON:
https://www.patreon.com/bikeandsailclassical
Posted by BIKE CLASSICAL at 12:21 PM