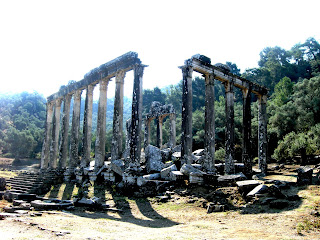 Kyromos or Hyromos (Hellenized as Euromos), mentioned in the 5C BC as a member of the Delian League (a collection of city states founded by Athens in order to confront the agressions of the Persians), was among 425 such city states, and obligated to pay six talents annually.  At that time, 4,200 (approximately) of those 1/3 inch size ancient Athenian silver coins (known as drachma), was equal to 1 talent. 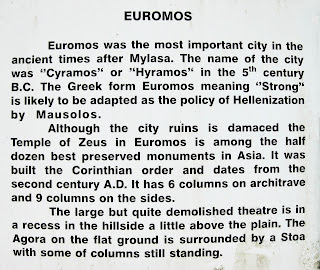 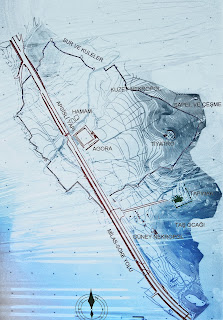 Euromus in located 12 kilometers north of ancient Mylasa, and in ancient times was overshadowed by its neighbor.  The circumstances of the city over time are apparent due to the lack of completion of its magnificent monument, the Temple of Zeus Lepsynos. 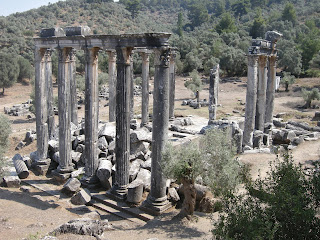 Though never completed, the Temple of Zeus Lepsynos at Euromus is one of the best preserved temple monuments from ancient times.  Plans are currently underway to completely restore the 2nd C building, as there has been over the millennia a high rate of retention of its original building members at the site. 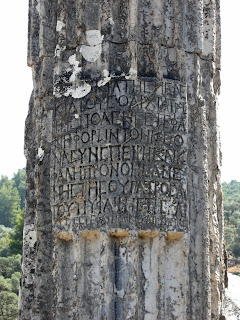 The hexastyle (meaning six columns at the front) peripteral (meaning, surrounded by columns, with ptera meaning colonnade) temple, has eleven columns along its length in the Corinthian order which are fluted, though the columns that face the hillside to the southeast are not fluted, most likely due to a lack of municipal funds during the building construction in the 2C AD.  Thus, the fluted columns bare inscriptions of dedication to the citizens who funded the work to help complete the project (see above and below). 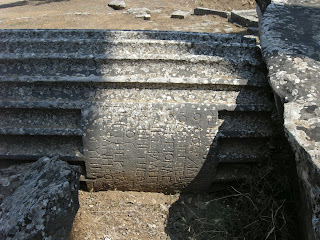 The engraved plaques record the names of the wealthy citizens who gave funds to help fund the construction of the temple.  According to the inscriptions on the plaques:

"Five were presented by physican and magistrate Menecrates and his daughter Tryphaena, and seven by Leo Quintos, another magistrate." Akyaka.org 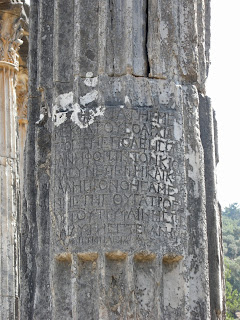 Pictured above, a fluted column with the dedicatory plaque for all to witness, while pictured below, two unfinished columns express the economic shortfalls the city must have faced during the construction, which according to assessments of the buildings ornamentation style, is thought to have taken place during the reign of Hadrian 117-138 AD. 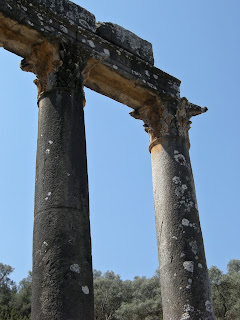 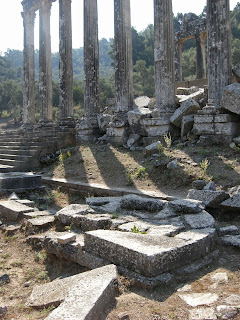 The base of an exedra sits in situ on the city side of the temple (pictured above and below).  With its curved back, those who sat on the backed stone benches that followed the curve would have faced each other as they engaged in conversation.  Exedra were often placed in proximity to sacred sites, along sacred ways, or on the edge of an agora as at Priene, or perhaps of the front of a fountain, as at Hieropolis. 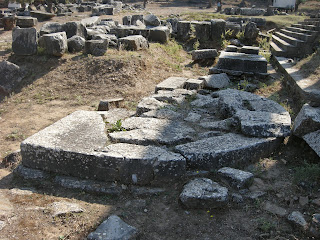 Next to the exedra, a large block sits on a podium, and appears to have once supported a statue.  Also in view are the unfinished steps of the temple. 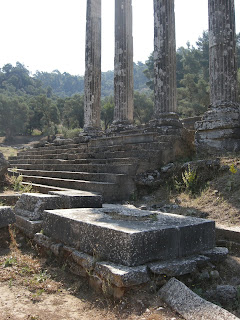 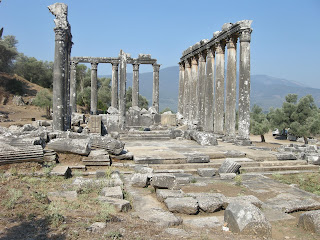 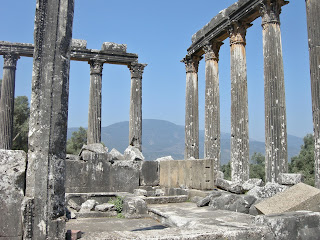 Clearly pictured above and below, the base or U-shaped box on which or within which the cult statue would have stood. 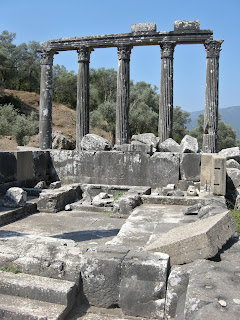 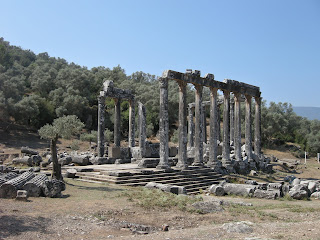 The sketch below by Sir Charles Fellows from 1839 is labeled, 'Temple at Labranda', and I'm sure that he had hoped to have found the location of the Sanctuary of the Labrys, however, the temple in the sketch is the Temple of Zeus Lepsynos at Euromus.  We can see from the sketch, that the temple stands today pretty much as it did in 1839. 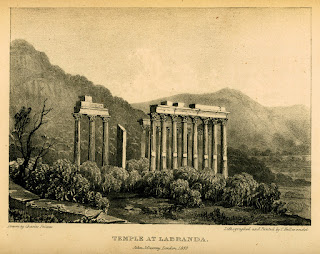 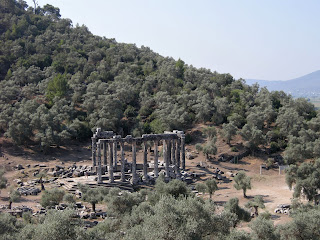 Pictured above, the temple of Zeus Lepsynos as it appears from hill where the theater is located.  Below, the theater is currently being excavated, with it cavea still some meters under ground level. 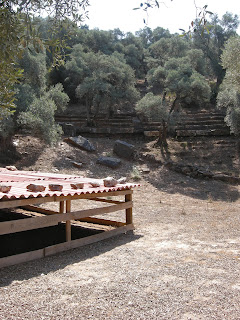 Pictured below, excavations at the theater have exposed an alter (which would have been used for sacrifice, ensuring a good outcome for the performance), and a badly damaged VIP theater seat. 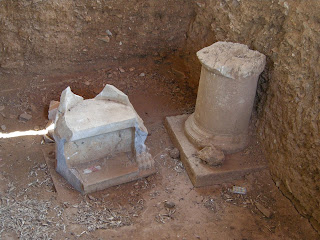 Further excavations at the theater are revealing the various sections of the ancient build, which, like the temple, seem to have escaped extensive quarrying. 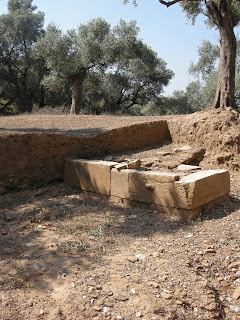 The area located southeast of the temple of Zeus Lepsynos is home to the south necropolis, where several sarcophagus are located, as well as a vaulted monumental tomb. 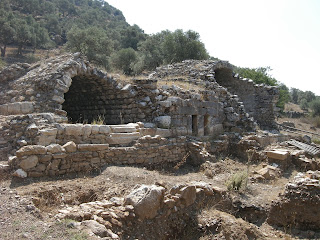 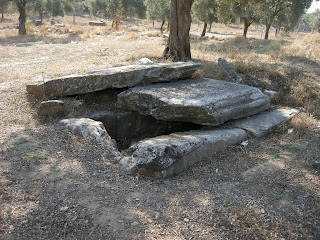 During the 2015 and 2016 cycling season, I was within the vicinity of Heraclea below Latmos several times.  Labraunda, which I visited in 2015 sits high in the foothills on the back side of Mt. Latmos, while Euromos is a mere twenty kilometers south.  I did visit Heraclea below Latmos in 2005, however, I'm not sure if I did justice to the wonderment of the site.  At that time I was using a film camera, and have yet to scan, post and document the site (as with all the other sites I visited in 2005).  Those sites will have to wait for a more convenient time to do all that work.  Pictured below, a visitor took my photo in front of the temple of Zeus Lepsynos. 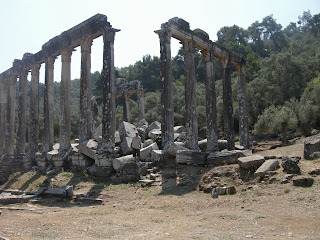 Posted by BIKE CLASSICAL at 7:03 AM