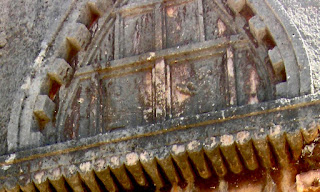 Near the village Cevreli, along the old coastal road between ancient Cyaneae and ancient Sura, sits a beautiful 4C BC Lycian rock cut house tomb.  Finely sculptured images can be seen on the face of the upper story or pediment; a testament to the ancestor worship practiced in ancient Lycia.  An old man reaches out, perhaps to receive the recently deceased relative into the afterworld.  A women rises from her bed with arms in the air . . . , is she overcome at the site of her father, or grandfather?  Often, a funerary feast is depicted, perhaps as a preparation for the journey.  It is a common theme that even after death, family ties are maintained and well represented in Lycian funerary culture. 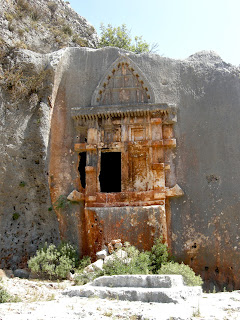 The tombs would often provide a resting place for extended family members, again reinforcing the bond between relatives.  The deceased were usually cremated, with the remains being placed in large funerary jars, or, inhumed.  Carved representations of wooden poles can be viewed supporting the upper section of the roof of this and many other rock cut house tombs, just as real wooden poles would have done in an actual Lycian house (a reproduction of a similar type Lycian house is pictured below, this one sits next to gushing spring at ancient Limyra).  The easily sculpted soft limestone throughout the region provided a ready medium for fine detail sculpting. 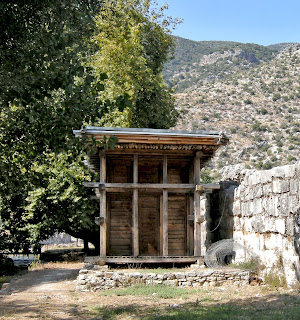 Lycian tomb locations can often be seen in and amongst the living area of the ancient cities, whereas the Hellenes or Romans preferred to inter their prominant deceased citizens in necropoli along, and/or along the main roads leading into the city.  When instead placed high up on a cliff, or near the sea, it was believed that a winged siren would come and carry the soul of the departed into the afterworld. 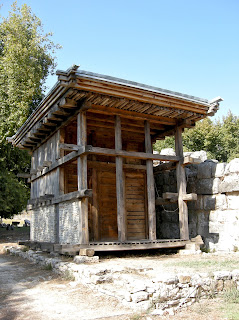 The inner chamber of Lycian rock cut tomb would often have beds carved from the interior where the deceased would be laid to rest and gifts could be placed for their life beyond this world.  Such tombs were then sealed with sliding stone doors with notches that would assist in the movement of these very heavy objects. 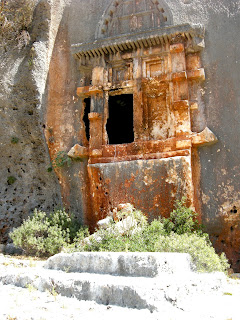 Pictured below, a view of the Bucak Tomb from the old coastal road . . . , a road very much less traveled.  I followed this road to the ancient city of Sura, and I can say that this route is among the most relaxing cycling paths I have taken thus far, as it circumnavigates the main highway that runs between the same points A and B higher up in the mountains. 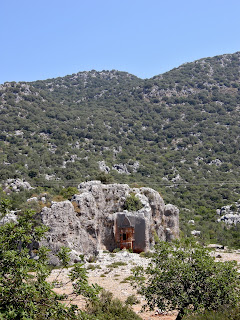 Posted by BIKE CLASSICAL at 2:46 AM