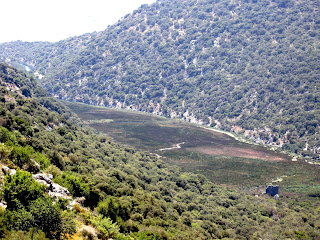 Sura, which was a dependency of nearby Myra, and closer still to the ancient port at Andriake, must be one of the most overlooked sites of the known ancient cities within modern Turkey.  The highway that divides the city in two allows little chance to catch the ancient monuments hidden among the greenhouses and overgrowth.  I myself might have missed this rarely visited site had I not approached the ancient city from the coastal road that begins at Cyaneae and ends at Sura.  As I approached, I found myself high up on a ridge overlooking a deep valley fronted in the distance by the sea coast.  At its bottom, a small river flowed from nowhere, but appeared to lead from an ancient structure that I had no idea at the time, was the Temple of Apollo Surios (pictured above in the lower right corner), which stills stands approximately 8 meters high.  The city center sits atop the ridge about 100 meters above the temple (pictured in the upper left of the same photo). 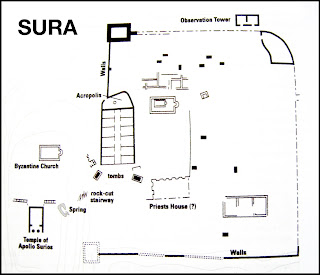 Though I have now passed this site twice, I have yet to make my way down the steep incline to the temple, which I was to discover later was known in ancient times for its Oracle Fish of Apollo, and further, that there is a rock-cut staircase that leads down to the site, and to the spring that still fills the pool where the fish would predict future events for those who inquired.  The Hellenistic writer Polycharmus described the workings of the oracle:

"When they come to the sea, where is the grove of Apollo by the shore, on which is the whirlpool on the sand, the clients present themselves holding two wooden spits, on each of which are tens pieces of roast meat.  The priest takes his seat in silence by the grove, while the client throws the spits into the whirlpool and watches what happens.  After the spits are thrown in, the pool fills with sea-water, and a multitude of fish appear as if by magic, and of a size to cause alarm.  The prophet announces the species of the fish and the client accordingly receives his answer from the priest."

I am looking very forward to the day when I anchor my sailboat off this ancient harbor and make my way to the Oracle Fish of Apollo, where I will then perform the ancient mystery and receive my consultation, and, observe the interior inscriptions attributed to the deities Apollo Sozon/Surios and Zeus Atabyrios of Rhodes. 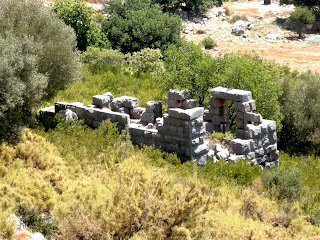 A little further up the road where the valley meets the upper plain, the ancient city begins to raise its head.  Pictured above, a Watch Tower guards the north east section of the city just beyond the city wall.  And again, the overgrowth of thorny brush kept me at bay from further investigation, because cyclist bib-shorts are not the best gear to ward off thorns, needles, snakes and scorpions, though I do think I often test them to the limit. 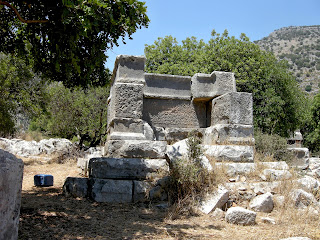 In search of further evidence of the ancient city, which at the time of visiting I had not a clue as to the name of, I found a dirt path leading into the rows of greenhouses and tall trees.  I first happened onto a well preserved Exedra Tomb Monument (pictured above) that appeared to be located within a necropolis, though one could not be sure, as the ancient Lycian's often located tombs in and around the areas of the city where people lived. 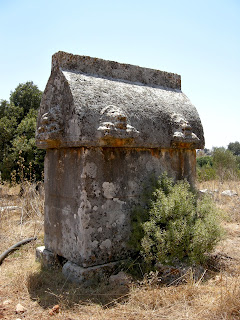 Near the Exedra Tomb there is a well preserved Lycian sarcophagi with an ornately carved lid decorated with lions emerging from within the tomb head and paws first. 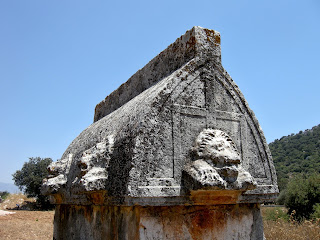 The only monument that can partially be seen from the main highway is an outcrop that is home to an extremely well preserved Lycian Pillar Tomb that is elevated on a high platform of sculpted rock that takes the shape of a Lycian House Tomb (pictured below). 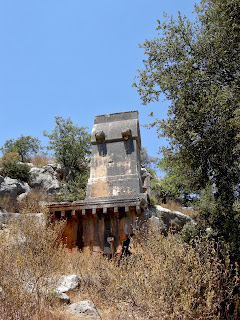 This is a unique looking 4C BC Lycian tomb for having an elevated Pillar Tomb rise above a flat-roofed House Tomb.  The patron of the family was most likely buried in the Pillar Tomb, while the chamber within the lower section of the tomb or house would probably have been a place of internment for family members, who were often buried together as to keep the unit close before and after death. 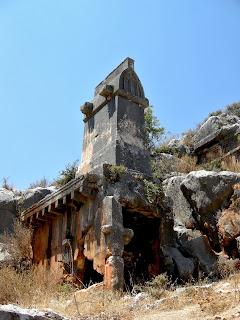 At the base of the large outcrop or acropolis are two inscriptions on rock carved stele (pictured below). 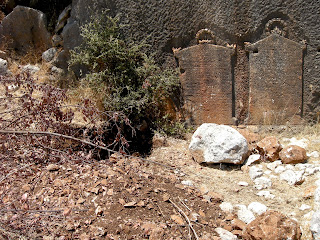 Though I didn't take the time to photograph all of the rock carved stele around the Acropolis, there are twenty plus such examples to be viewed. 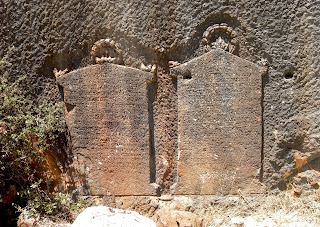 Posted by BIKE CLASSICAL at 9:12 AM