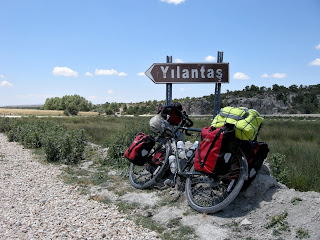 After circumnavigating the trail through the Phrygian Highlands, and I say 'trail', because at a certain point along the highland road  it became a rough, yet passable dirt path, I finally arrived at Metropolis, which I wrote about in a previous post.  Leaving Metropolis, I made my way to highway D665, which runs north and south between Afyon and Eskisehir.  I then continued north, investigating Yilantas ('Snake or Serpent Stone'), Arslantas ('Lion's Stone') and Arslankaya ('Lion Rock'), before heading on to Kumbet (ancient Vegum). 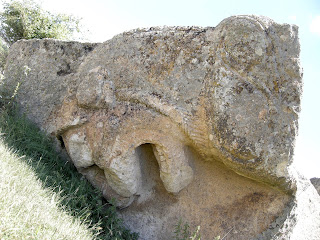 There approximately 40 Phrygian tombs located throughout the Goynus Valley, which makes it the largest Phrygian necropolis thus far discovered.  The monument pictured above and below is known as Yilantas ('Snake Rock'), but locals refer to it more often as Kirik Aslantas ('Broken Lion's Rock'), and it is thought to have been sculpted around the 6C BC. 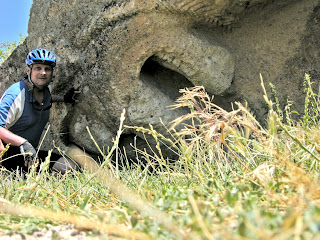 The Broken Lion monument was most likely destroyed by an earthquake, and this section is the most discernible among the scattered remains.  I must however, ask for the forgiveness of the reader, as I am a photographer/storyteller in progress/training, and I neglected to photograph the cliff where this monument was originally located. 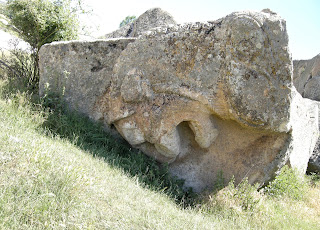 Unfortunately, this mistake was not my only one, as there is another major monument known as Maltas ('Temple Rock'), that is located along a trail of the main road, which I could not for the life of me find!  I must have ridden up and down that road five or six times in my efforts to find it, to no avail.  So I promise, I will return to the Goynus Valley at some point in order to do a more thorough job. 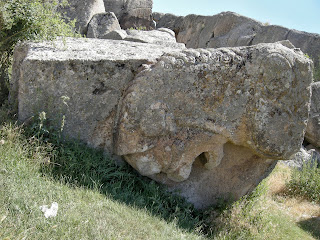 If you examine the mane of the lion, you can see the intricate lines and skill of the artist, and because the curls do resemble snakes, perhaps this is the reason it is referred to as Snake Rock.  Again, upon my return, I will get close-up shots of this monument and the others around this most magnificent site.  Pictured below is the monument known as Aslantas ('Lion's Rock'), which is located about 200 meters from Yilantas. 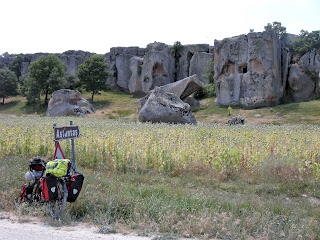 Aslantas ('Lion's Rock') is also thought to have been sculpted around the 6C BC.  In the center of the rock is a square opening, that leads to the inner chamber of the tomb.  The entrance is guarded on both sides by giant standing lions that are facing each other with their jaws open in a muted roar.  Rising above the entrance of the tomb between the two lions is the tree of life, for the deceased to climb to the heavens, like Jack climbing the beanstalk to another world. 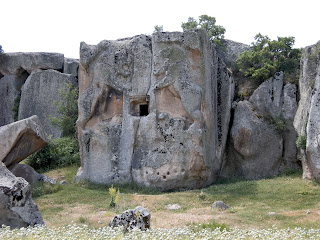 The tomb has been sculpted in an 11 meter high square volcanic tuff rock that protrudes out from the cliff face.  The tuff cliff walls encapsulate the whole of the valley, and I reiterate, I will provide such photos following my future return! 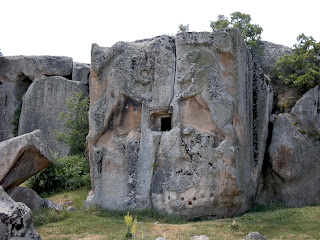 If you look closely at the bottom of the sculpture, just below the hind legs of the standing lions, one can see two more lions in a sitting position; perhaps these smaller lions were sculpted in order to provide additional protection?  Believing (falsely) that I had completed my work, I headed to Doger, north of Ihsaniye, where Aslankaya is located. 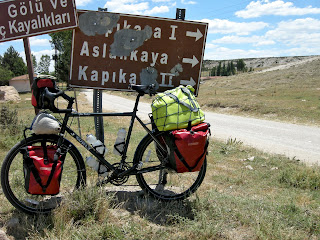 There is just something about the heat that puts the brain on hold, because as one can see clearly on the sign, besides Aslankaya, there are two other ancient sites (Kapikaya I, and Kapaikaya II) located along the same road, which I neglected to investigate!  I shall return!!  Cycling the back roads of Magna Phrygiae is very relaxing, on occasion challenging, but almost always serene, where solace can be experienced while swimming through nature.  Perhaps this is the reason the ancient Phrygians carved the Aslankaya shrine to Kybele, the Mother Goddess, here, in this natural womb of our planet. 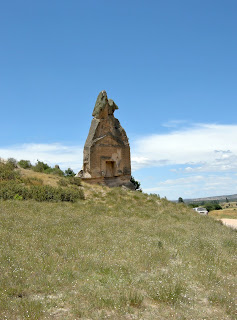 The ancient Phrygians must have stood in awe of this volcanic spire, as it directs the onlooker to the sky and beyond, from where Kybele has arrived on earth, as a baetyl stone, what we now call a meteorite; and the ancient Kybele stone secured not far away in a temple in her honor, in Pessinus, the sanctuary of Kybele. 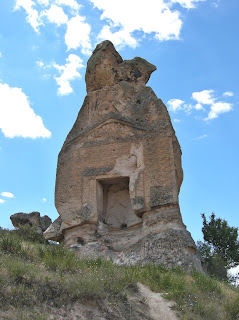 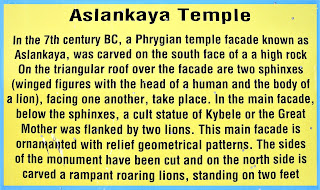 The Aslakaya shrine bears a very close resemblance to the Midas Monument in ancient Phrigiae at Yazilikaya.  There too, the Kybele statue stood, or, was seated in the door, and there too it has been destroyed. 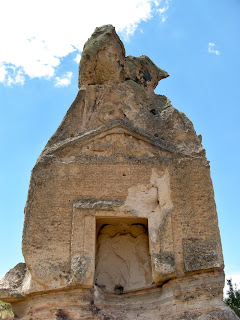 The destruction of monuments in Turkey occurs daily, it is ongoing, and there is little enforcement to stop it.  As you can see in these photos, a hole was drilled at the feet of the Matar Goddess, and it is believed that an explosive charge was set-off in an attempt to either steal and sell the statue, or, to disfigure the goddess for religious reasons.  One can see similar destruction within the magnificent Tomb of Alcetas (a general of Alexander the Great) at Termessos. 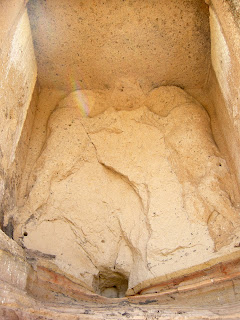 The guys pictured below were my personal escorts to the monument: I had stopped at a gas station in Doger to use the toilet, and of course was offered tea, and though these guys couldn't speak English, I managed to communicate to them (with my rough Turkish), that I was looking for Aslankaya. 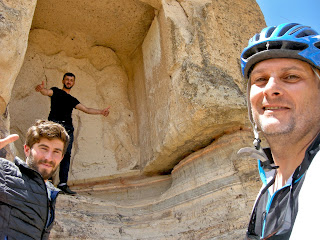 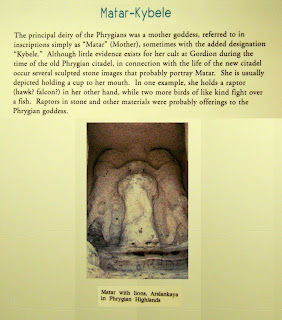 The statue of Kybele pictured below is on display at the Gordion Museum, and is dated to around the 7-6C BC, the same period as the Aslankaya monument.  As can be seen, she is holding a cup for libations in her right hand, a bird of pray clings to her left hand, and the ever present attendant lions on either side of her, thus solidifying her connection with an untrammeled nature. 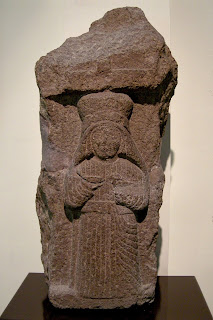 Kybele is the Matar of all, the living and the dead, the wild and the civilized; she is the protector of the city, the one who holds the wildness of nature at bay, and who at the same time ensures the continuation of a civilized life. 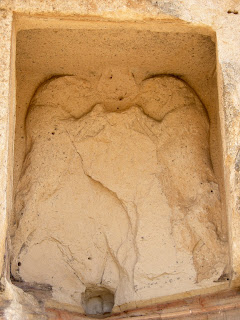 The images and iconography included in the pediment reliefs were not lost on the ancients, who would have made a pilgrimage to this site, probably in the month of March, which was believed to be the month when Kybele had found a newly born Attis amongst the reeds along the Phrygian river Sangarius (sound familiar?). 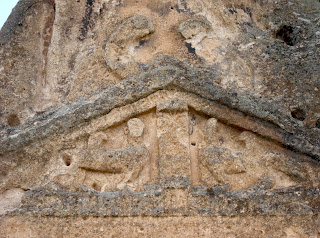 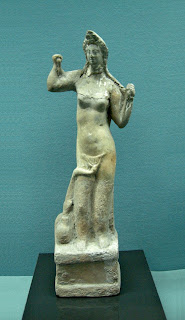 Such religious sites as Aslankaya would have been utilized in much the same way a christian church is used today, but, instead lighting a candle in the hopes that ones prayers would be answered by the god/s, the ancient Phrygians, Greeks and Romans would present votive statuettes (among other relics), for the purpose of appeasing the gods (pictured above). 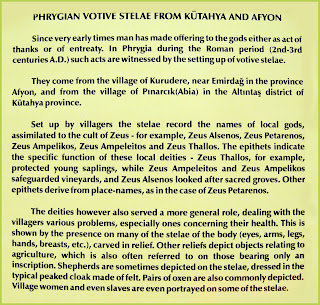 Pictured below, the head of a sculpture of Kybele, with the city as her crown, protecting it and its inhabitants from the wildness of nature. 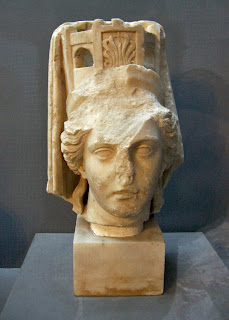 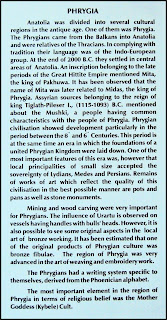 Pictured below, a statuette of a Phrygian man on display at the Afyon Archeological Museum, with his signature cap, dress, robe and foot ware, and sword, he is ready to face that which will be presented to him by his surroundings. 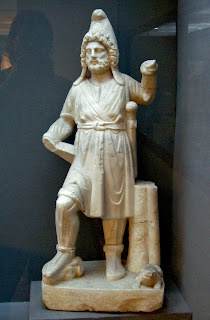 Following my visit to the Kybele monument, I made my way back to the center of Doger, where at the main circle of the town was none other than a small reproduction of Aslankaya (pictured below). 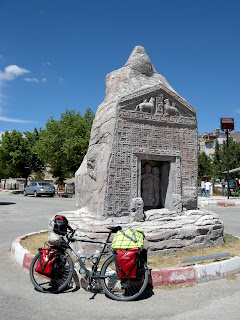 Though the pediment reliefs are somewhat inaccurate, one can get a better picture of how the face of the monument was sculpted.  While trying not to be hit by the cars circling around me, the locals just stared at me as I snapped these photos. 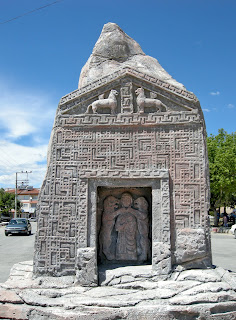