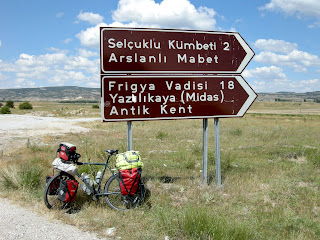 Following my investigation of the Goynus Valley, which included the monuments of Yilantas, Arslantas ('Lion's Stone') and Arslankaya ('Lion Rock'), I proceeded north to Kumbet, which was known in ancient times as Vegum.  The sign along the highway (pictured above), does not even give the name of the ancient city (Vegum), but simple reads 'Arslanli Mabet', which translates to 'Lion Temple'.

The rest of the sign reads 'Frigya Vadisi', which translates to Phrygian Valley, which will be the subject of my next post, that focuses on ancient Phrygiae, or, Midas City (indicated below, in the bottom left of the satellite map).

The 'Kum' in the name of the village of Kumbet, would appear to be a direct decendant of its ancient name, Vegum.  Kumbet is a very fascinating village, and though it is about 1 km off the modern main highway, in ancient times it would have been an important way station and/or crossroads.  To the east, ancient Phrygiae, to the west, ancient Meiros, to the north, ancient Metropolis, and to the south, ancient Prymnessus. 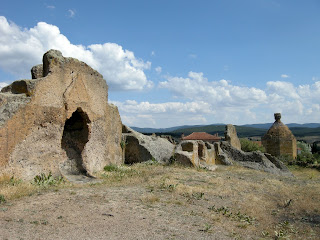 When approaching Kumbet village, one can see an acropolis rising among the old mud brick houses.  This acropolis (pictured above), is home to the ancient citadel, where a palace most likely stood, and today, where numerous burial tombs remain.  Pictured below, a close-up of one of the many tombs that have been carved out of the rock face, though to me, it resembles a guard box that would have been occupied by a soldier in order to protect the entrance to the palace. 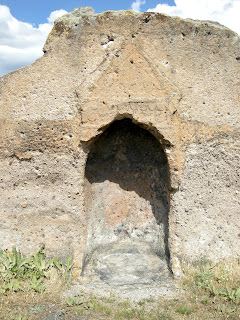 Pictured below, another tomb that has been carved out of the rock outcrop that resembles a guard box, though this particular one really has a medieval look to it.  There are also pronounced walls, which give the area the feel of a palace. 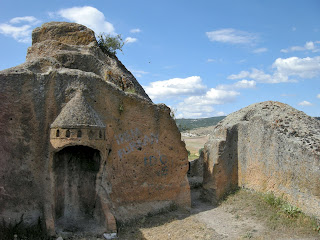 Walking amongst the rock cut tombs and walls on the acropolis is like walking through a garden maze; around every corner something new appears that was in no way hinted at before the corner was turned, or, before the doorway was passed through.  What appeared around one of those corners is a stepped altar (pictured below), or at least, that is what it seems to resemble.  A village idiot has attempted to secure their place in history by carving their initials in a shield on the back wall of the monument. 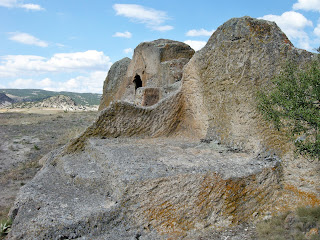 Much of the building materials of the ancient acropolis have been quarried and repurposed over the millennia.  Vegum (or, Kumbet) is home to a vast swath of fertile land that has been harvested for millennia, and thus, farming families then would have lived the roundness of their daily lives much like they still do today, and this would have included toys for the children (pictured below, (Kutahya Archeological Museum). 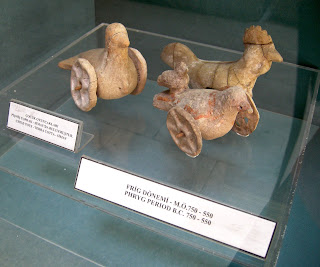 Of course, a farmer working the hot days out in the fields would have to have a ready supply of water, and probably would have kept a canteen like the one pictured below (Kutahya Archeological Museum), close at hand. 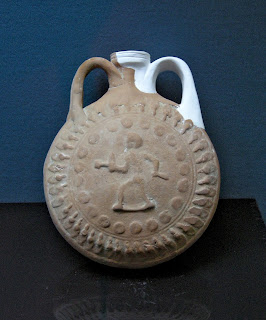 Pictured below, a Seljuk tomb was conveniently constructed out of what are probably stone blocks from the ancient defensive walls.  High on the roof point is a massive birds nest, which as you can see if you look closely, has been built successively on older nests, and probably by the same brood, as storks are known to return to their nests year after year. 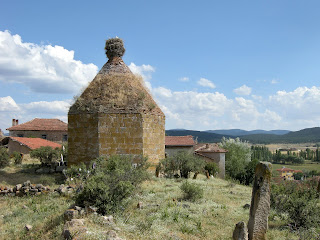 When we have a closer look at the building members of the tomb, we can see plenty of Roman and Byzantine marble fragments among the tufa blocks.  The tomb was wide open when I arrived, so I peaked my head inside to find an active dwelling. 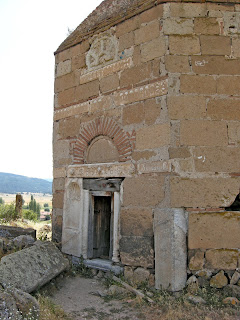 With the Seljuk grave stele standing at the head of the central burial plot, rugs, clothes and various other items were laying on top of what appeared to be a number of burial plots.  As it turned out, the guard in charge of protecting the citadel had converted this tomb into his living quarters, and he wasn't squeamish about it in the least. 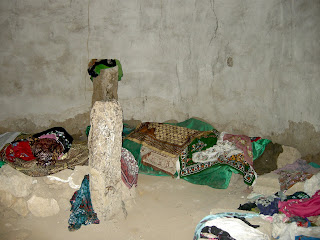 After chatting with the bekci (pronounced, 'beck-chi', meaning, guard), he took me around a narrow corner of the citadel that I might have missed if I hadn't met him.  I really hadn't been doing enough research with regard to my destinations, and as it is very time consuming, I have remedied this through ongoing research throughout the year.  It really didn't seem like there was anything to see, until we passed by a house, and there in what was essentially the owners backyard, was the Tomb of Solon, or, the Lion Tomb (pictured below).  I know you might like to point out that the sign on the highway said, 'Arslanli Mabet', but when you are cycling, things easily slip from the mind, or, connections are just not made. 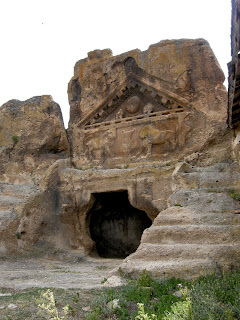 The Tomb of Solon is believed to date from the early Roman era, though its iconography (and inscriptions found at the sight) point at a mix of Phrygian and Roman culture.  Following the decline of the Hittites, the Phrygians ruled western central Anatolia between roughly 1150 - 550 BC, and continued to follow the core of their culture under the control of the Persians, Greeks and Romans. 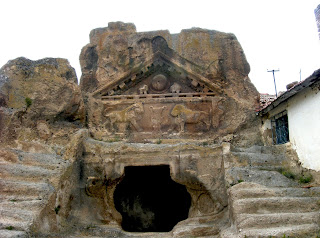 From the courtyard in front of the tomb, there are stairs climbing both sides of the tomb, which lead to what looks like an alter in front of the frieze and pediment.  The frieze is decorated with two lions facing each other, and guarding an urn that stands between them, which would representationally hold the remains of the deceased.  In the center of the pediment is the representation of a shield, and what looks like a pair of horses, though they could be lions, hinting that the deceased had won his honor in battle. 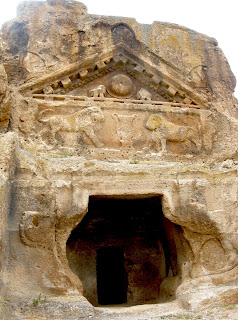 The tomb is either surrounded and/or buttressed on three sides by local houses, and it would appear that the inner chamber was used for storage and/or a living space, as there is a wooden door attached to the back of the tomb (pictured below).  Further, the ceiling of the inner chamber is blackened with soot from cooking and warming fires. 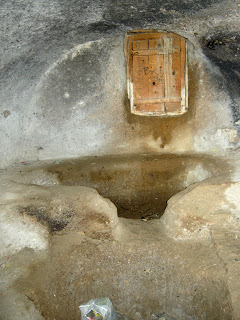 Finely decorated acroterion can be seen at the peak of the roof, and on each of the roof corners.  This truley is a magnificently decorated tomb, and according to inscriptions, was meant to house a man by the name of Solon. 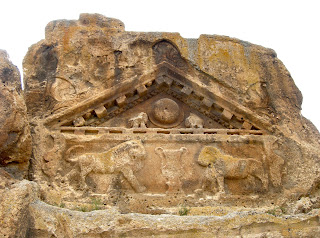 https://www.patreon.com/bikeandsailclassical
Posted by BIKE CLASSICAL at 9:51 AM