Philadelphia: Sixth Seat of the Devil 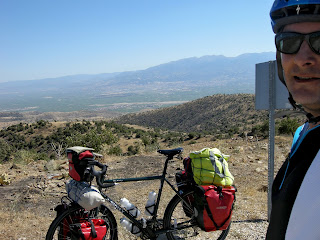 Getting off the main highway that runs west from Usak (Turkey), I headed into the hills south of Kula, which is a rich golden oasis away from trucks and buses.  As you can see in the photos above and below, all roads leading south take you to what seems like the edge of the Anatolian Plateau, where it drops sharply to the fertile plain of the Gediz River, known as the Hermus in antiquity.  Alasehir, or, ancient Philadelphia can be seen across the valley, nestled up against Mt. Bozdag, known as Mount Tmolus in antiquity.  This valley, which extends 105 km to the sea was in ancient times called the Cogamus, known today as the Kuzucay. 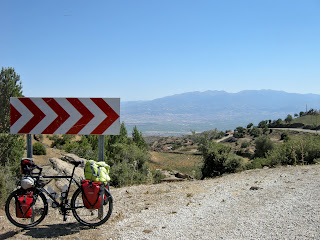 In ancient Greek, Φιλαδέλφεια means "the city of him who loves his brother", and it may come as a surprise, that Christianity flourished in Alasehir until the early 20th century, and further, is still a titular see of the Roman Catholic Church.  Recognized in the Book of Revelations (3:9) as "the Synagogue of Satan" due to treatment of the Early Christians at the hands of the Jews in the city, it is no wonder that the eventual triumph over the perceived evils has been guarded through legend and myth up until this very day. 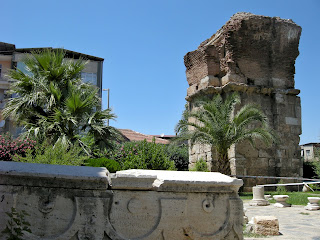 What is left of 6C-7C AD Byzantine Church of Saint John is still quite impressive today, as the massive scale of this monumental structure can be imagined when simply peering up the sides of its colossal columns (pictured above).  The rich valley that creates such wealth has a mild climate that produces an abundance of grapes, among other fruits.  As you can see in the photo above, beyond the Byzantine era sarcophagi, palm trees also soak up the intense sunlight. 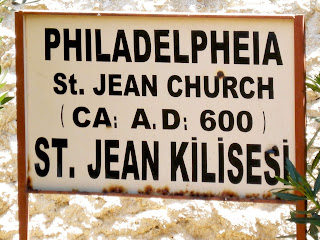 The compound surrounding the church is an open-air museum, with the remains from various historical periods on display.  The ancient city itself is now mostly lost to the expansion of the city of the millennia, and to the repurposing of the building materials that once formed the temples, agoras, fountains, gymnasiums and the rest. Furthermore, the town, which was founded by Attalus Philadelphus of Pergamum, suffers frequent earthquakes, that according to the historian Strabo, had caused the city to be nearly abandoned during his time. 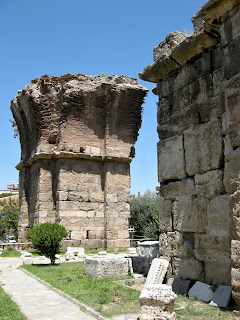 Though the city was demolished many times by violent earthquakes, one of which is noted during the reign of Tiberius (Tac. Ann. 2.47), Christianity continued to grow at an early period, with the number of churches growing along with this expansion of the faith. 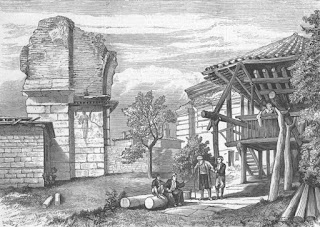 My time spent in Alasehir was limited, and according to my later research, there are the remains of approximately twenty-four ancient churches in the city, so, if you have the time, be sure to search for them.  The illustration pictured above was drawn in 1878. 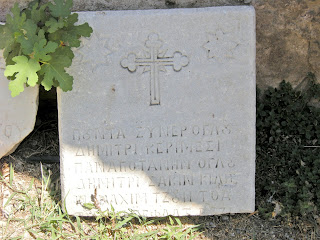 The denominations of the churches around the city were representative of the people who came from the edges of the Byzantine Empire to settle in "the city of him who loves his brother".  Pictured above, a funerary piece with a Greek inscription is on display, while the two similar pieces pictured below are inscribed with what I believe to be Armenian text. 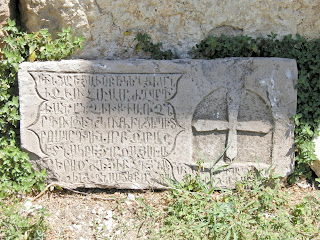 8 I know thy works: behold, I have set before thee an open door, and no man can shut it: for thou hast a little strength, and hast kept my word, and hast not denied my name.

10 Because thou hast kept the word of my patience, I also will keep thee from the hour of temptation, which shall come upon all the world, to try them that dwell upon the earth.

11 Behold, I come quickly: hold that fast which thou hast, that no man take thy crown. 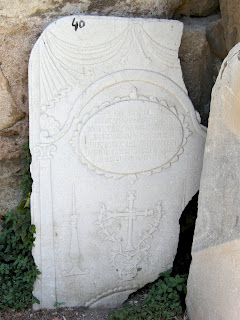 The Byzantine city is said to have fought off the invading Turks on numerous occasions, until it eventually succumb to advances of Bajazid in 1390 AD. 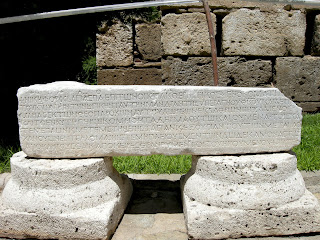 Established in 189 BC by Eumenes II of Pergamon, the city was literally named by Eumenes due to the love he held for his brother and successor Attalus II, nicknamed by his older brother "Philadelphos" to express his loving appreciation for his younger brothers' loyalty. 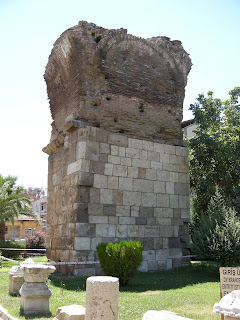 The kingdom of Pergamon, which included Philadelphia, was bequeathed to Rome when Attalus III Philometer, the last of the Attalid kings, died without an heir.  In 129 BC, Philadelphia became part of the new Roman province of Asia, which combined the former Pergamon kingdom with Ionia. 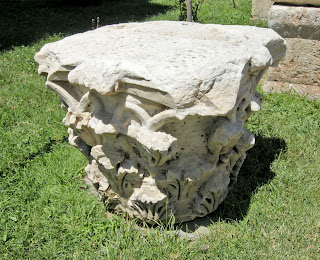 Pictured above, a Corinthian capital from the Roman period, and below, an architrave from the same period.  Apart from the building members that can be viewed within the church compound, little remains of the ancient Roman city. 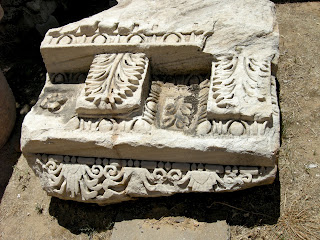 HOWEVER, once again, my lack of due diligence in researching the site/city, led me to over-look the remains of the small Roman Theater that is located at the northern edge of Toptepe ('tape' means, hill).  So, once again, I must return to yet another site in order to complete my mission. 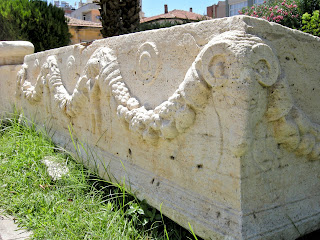 As would be expected, a church usually houses the remains of the deceased, and Saint Johns Church is no different, only in this case, the remains ore of a city lost to both natural and human destruction. The sarcophagi and funerary stele are pretty much all that remain to represent the physical existence of ancient Philadelphia (pictured above and below). 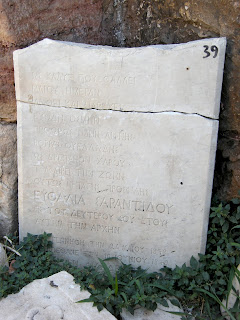 With one foot in the graveyard of time, this marble sculptural remain gives only a hint of the magnificence this Roman city once put on display.  Known as "little Athens" around the 6C AD, due to its festivals and temples, this would indicate that a large portion of the citizenry remained loyal worshippers of the Greek and Roman gods, and goddesses.  Still lost with no location known, is the Temple of Artemis. 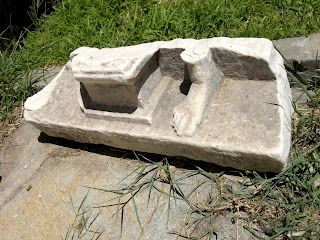 There are however, some remaining fragments of the Byzantine walls that once surrounded the city, and can be viewed near the bus stand on northeast edge of town. 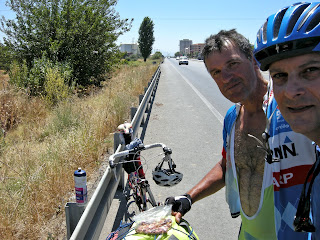 I left Alasehir with a feeling of disappointment, though, mostly as a result of my lack of research of what remained of the ancient city. This lack of due diligence would also come back to haunt me at my next stop, ancient Sardis.  I did however meet a 'cyclist of brotherly love' on my way out of Φιλαδέλφεια; this cyclist from Bulgaria tours long distances without any panniers, and a bare minimum with regard to a repair kit, and he thought I was crazy for the weight I was dragging up and down the mountains around the country. 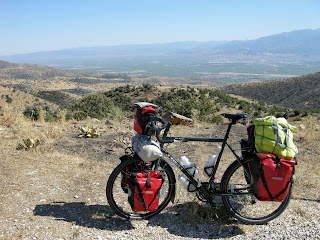