School Of Rock vs. Bike Classical 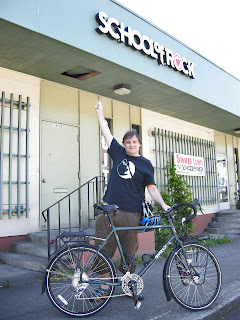 EXCLUSIVE: School Of Rock has decided to hire Detroit Jack to teach Philosophy of Rock with a ten year contract with a salary of seven figures!! Therefore, the Bike Classical world tour, which was to begin May 10th, has been suspended . . . . . . . . . NOT!!!!!

I've been in the U.S. for the past three weeks, received 70 boxes I sent from Japan (in storage), prepared my tour bicycle (SURLY!!) and flew out of Portland, OR. yesterday. We flew 300 miles out, and the pilot discovered there had been a leak in the cockpit oxygen system, which they need as a back-up in order to cross the Pacific, so, the plane turned around and flew to Seattle. We were on the ground for two hours, while repairs were made, then flew to Tokyo. I missed my connection to Taipei, so I am in the Nikko Hotel (very nice, with dining vouchers), and I fly on to Taipei tonight.

I'll begin my 10 year around the world bicycle tour from Rome (after 2 weeks training in Taiwan).

**If you'd like to help with future postings, please feel free to support them through PATREON:
https://www.patreon.com/bikeandsailclassical
Posted by BIKE CLASSICAL at 8:54 PM