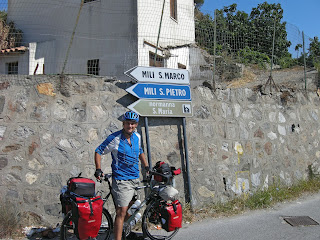 I've made the long trek (cycling!) from Normanna S. Maria to Taranto, and on both ends I've had the experience of staying at my first bed and breakfasts. After a 90 km ride from Catania, I was flagged down by a guy in a car in Normanna S. Maria (just south of Messina, Sicily), who offered his B&B Messina to me for 15 euro (without the breakfast, which I think is a good deal!!), so how could I say no? And as I write, I'm staying in the fantastic B&B Maricentro in Taranto, Puglia. I've been camping since I left Sicily for roughly between 10 and 15 euro per night for the past 400 km, so to stay in the luxury of a B&B is very much appreciated. I hadn't planned to stay at B&B Maricentro in Taranto, but the only hostel in town, which had a mens dormitory, was closed, but now I'm glad it was, because for a few euro more, I am enjoying a taste of comfort, that included a delicious white chocolate filled cressant (with a side dish of special cookies!) and cappuccino for breakfast (at a first class cafe . . . see pics below!). 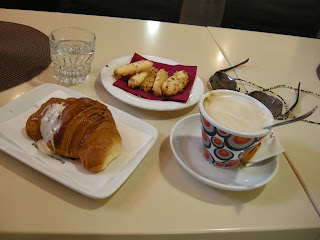 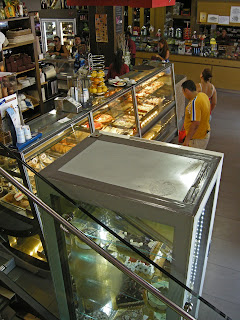 While cycling these very hot and dry sunny days, I've discovered the cyclists best energy supplements, which are limon sherbet ice cream and good ol' Coca Cola.  They put the sugar directly back into your muscles, and it really makes a huge difference in long distance cycling (because it's also cold!). 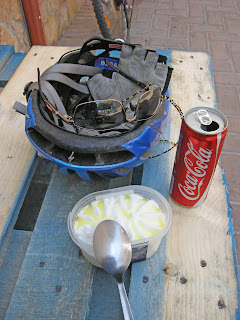 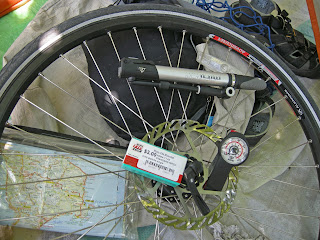 I managed to get my first flat tire midway through Calabria, and I must say, it was a cinch (15 minutes) to pull and patch.  It reminded me so much of when I was a kid and fixed flats routinely. 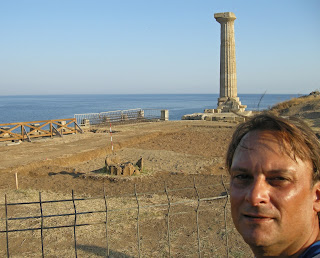 Above, the lone standing Doric column of the Temple of Hera Lacinia (5th century BC) at Capo Colonna represents what must have been a most magnificent site to the sea farers of this beautiful cape. Surprisingly, the temple structure remained whole (minus the wooden members) all the way up to the 16th-17th century AD, when it was ruthlessly quarried to build the religious and military structures in Kroton/Croton, including its port (very very sad).  Below, a sketch of the temple drawn before it was dismantled. 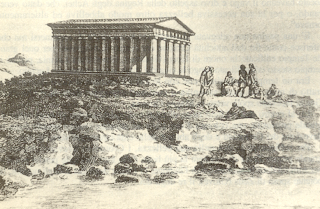 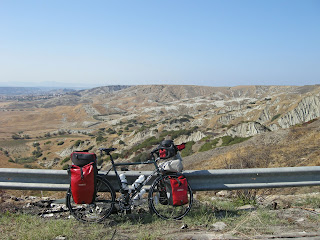 Below, the very quiet and serene sanctuary of Tavole Palatine and the Temple of Hera (5th century BC). This is what remains of ancient Metopontium.  I settled into a nice picnic and siesta in this park, which is free to the public to enter. 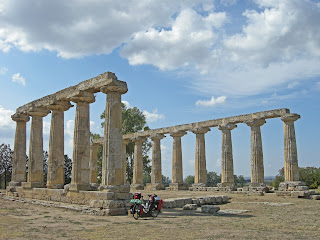 The birthplace of Aristeas, the poet who sung of these things, I have already mentioned. I will now relate a tale which I heard concerninghim both at Proconnesus and at Cyzicus. Aristeas, they said, who belongedto one of the noblest families in the island, had entered one dayinto a fuller's shop, when he suddenly dropt down dead. Hereupon thefuller shut up his shop, and went to tell Aristeas' kindred what hadhappened. The report of the death had just spread through the town,when a certain Cyzicenian, lately arrived from Artaca, contradictedthe rumour, affirming that he had met Aristeas on his road to Cyzicus,and had spoken with him. This man, therefore, strenuously denied therumour; the relations, however, proceeded to the fuller's shop withall things necessary for the funeral, intending to carry the bodyaway. But on the shop being opened, no Aristeas was found, eitherdead or alive. Seven years afterwards he reappeared, they told me,in Proconnesus, and wrote the poem called by the Greeks The Arimaspeia,after which he disappeared a second time. This is the tale currentin the two cities above-mentioned. What follows I know to have happened to the Metapontines of Italy,three hundred and forty years after the second disappearance of Aristeas,as I collect by comparing the accounts given me at Proconnesus and Metapontum. Aristeas then, as the Metapontines affirm, appeared tothem in their own country, and ordered them to set up an altar inhonour of Apollo, and to place near it a statue to be called thatof Aristeas the Proconnesian. "Apollo," he told them, "had come totheir country once, though he had visited no other Italiots; and hehad been with Apollo at the time, not however in his present form,but in the shape of a crow." Having said so much, he vanished. Thenthe Metapontines, as they relate, sent to Delphi, and inquired ofthe god in what light they were to regard the appearance of this ghostof a man. The Pythoness, in reply, bade them attend to what the spectresaid, "for so it would go best with them." Thus advised, they didas they had been directed: and there is now a statue bearing the nameof Aristeas, close by the image of Apollo in the market-place of Metapontum,with bay-trees standing around it. But enough has been said concerning Aristeas.

Finally, I arrived in Taranto (ancient Taras) and came across this very interesting government building built in 1938. That's my bike in front of the massive wooden doors. The columns are topped with some powerful bronze Romanesque decorative castings.  Also, notice the goddesses of victory on the lower stone portions of the columns. 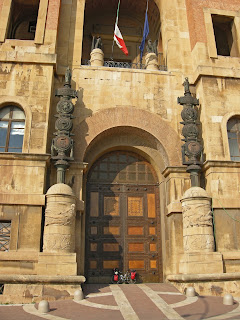 Below, the two remaining Doric columns of the Temple of Poseidon in Taranto (ancient Taras). "According to Thucydides (460-404 B.C.), the Japigi named the place in honour of Taras, the son of Poseidon (Neptune) and the nymph Satyria (Taras is widely represented on ancient coins of Taranto, called Nummus)." 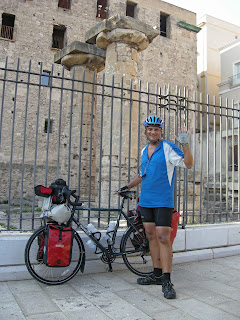 Below, a diagram and site information of the Doric Temple of Poseidon. 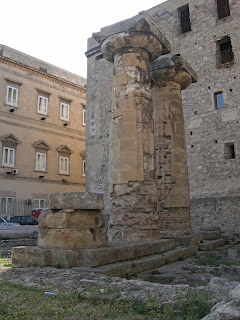 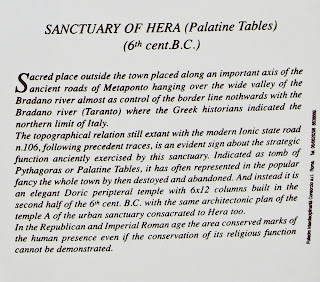 I spent a good three hours at the excellent Taranto Archeological Museum today, which has a spectacular display of 5th - 3rd century BC divinity gold pieces (which decorated divinity statues in the ancient sanctuaries, and one of the best collections of votive statuettes and vases! 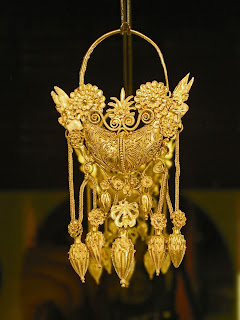 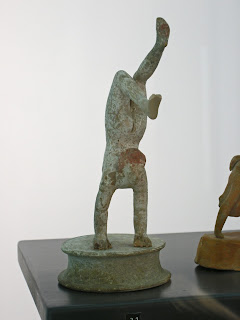 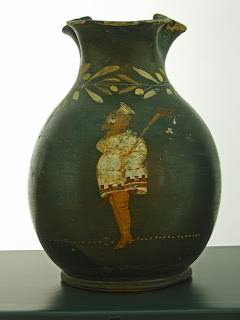