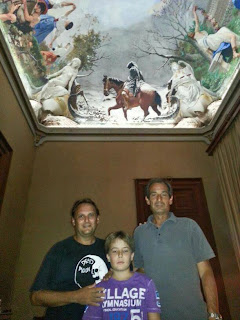 Standing with me under the ballroom ceiling fresco (Title: The Four Seasons) by Giuseppe Sciuti in the mansion of my host family are father Mario and son Andrea.  The mansion is around 130 years old, and has a collection of wall and ceiling frescos by the famous painter Giuseppi Sciuti.  Further, the walls are also decorated with numerous paintings by the great great grandfather of Mario, who was also a master painter.  The pictures below are more ceiling frescos by Giuseppi Scuti within the mansion. 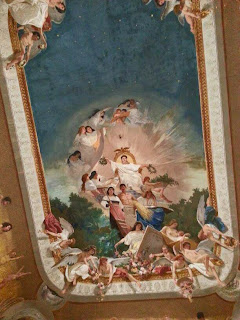 Our visit to the family mansion in Acireale (near Catania, Sicily) was a surprise to everyone, as we had just finished dinner at a beautiful restaurant, when Mario invited us to see the paintings. Unfortunately, I didn't bring my camera (pictures by Gabriele), and didn't get a picture of the giant fresco the greets visitors from the top of the grand marble staircase. 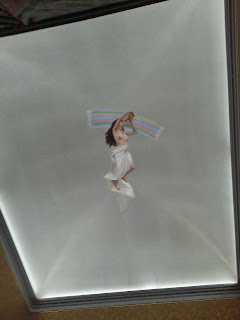 The interesting story here, is that before I had even met the family, I was waiting at their home in Catania, where I had been taken by Cecile (family friend), and while I was waiting for them to come home, I choose a book from many on their bookshelf.  The thick volume was titled, "The Artist Giuseppi Sciuti".  I only found out three days later that the family mansion was filled with frescos by the same artist.  What a coincidence! 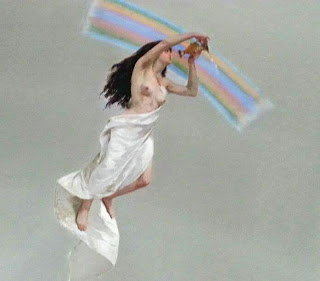 "(b Zafferana, Etna, 26 Feb 1834; d Rome, 13 March 1911). Italian painter. He studied initially in Catania with the scene painter De Stefani and then with Antonio Gandolfo. After an eruption of Mount Etna destroyed his father's livelihood, Sciuti was forced to work as a decorator for ten years. By 1863 he had made enough money to study in Florence, where he came into contact with the Macchiaioli. While in Florence he painted The Widow and The Traitress (both Catania, Mus. Civ. Castello Ursino). He returned to the south in 1867, making his name there with The Temptation. He continued to paint historical and genre scenes, exhibiting in Naples, Parma and Milan. By 1875, when he established himself in Rome, Sciuti was painting large-scale Roman and Greek scenes such as Pindar Praising a Winning Athlete (Milan, Brera). This direction in his work was reinforced by his association with the Veristi, including painters of historical subjects such as Cesare Maccari. The results are operatic in feel and indeed Sciuti painted the Arrival of the Carthaginians in Sicily (c. 1880) for the Teatro Bellini in Catania. He was considered one of the most important 19th-century Sicilian painters by his contemporaries.  He was a skilled draughtsman with a sense of the grandiose, who researched his historical compositions thoroughly. Apart from oils, he also produced frescoes: among others, a Virgin and Child, subtitled 'I am the Light of the World' (1900), in the Palazzo Provinciale at Sassari. In the cathedral at Acireale his fresco on the vault of the nave depicted God the Father, Religion and the Annunciation (1905)." 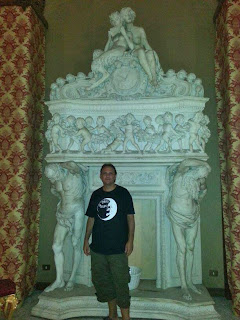 Above, I'm standing in front of a carved wooden wall decoration in the ballroom under The Four Seasons fresco.  Below, Gabriele and I pose next to one of the carriages in the horse stables, which occupy the left side of the mansion on the first floor. 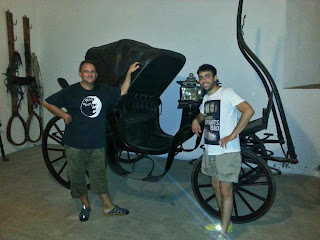 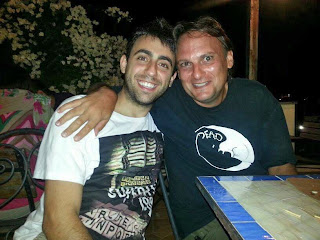 Terresa (Gabriele's beautiful girlfriend) took this picture at dinner, which was held on a terrace with an amazing full moon lighting up the sea in the distance, and fireworks blasting off at the annual town festival, held in the central piazza in Acireale.  A spectacular evening to say the least.

Posted by BIKE CLASSICAL at 6:37 AM