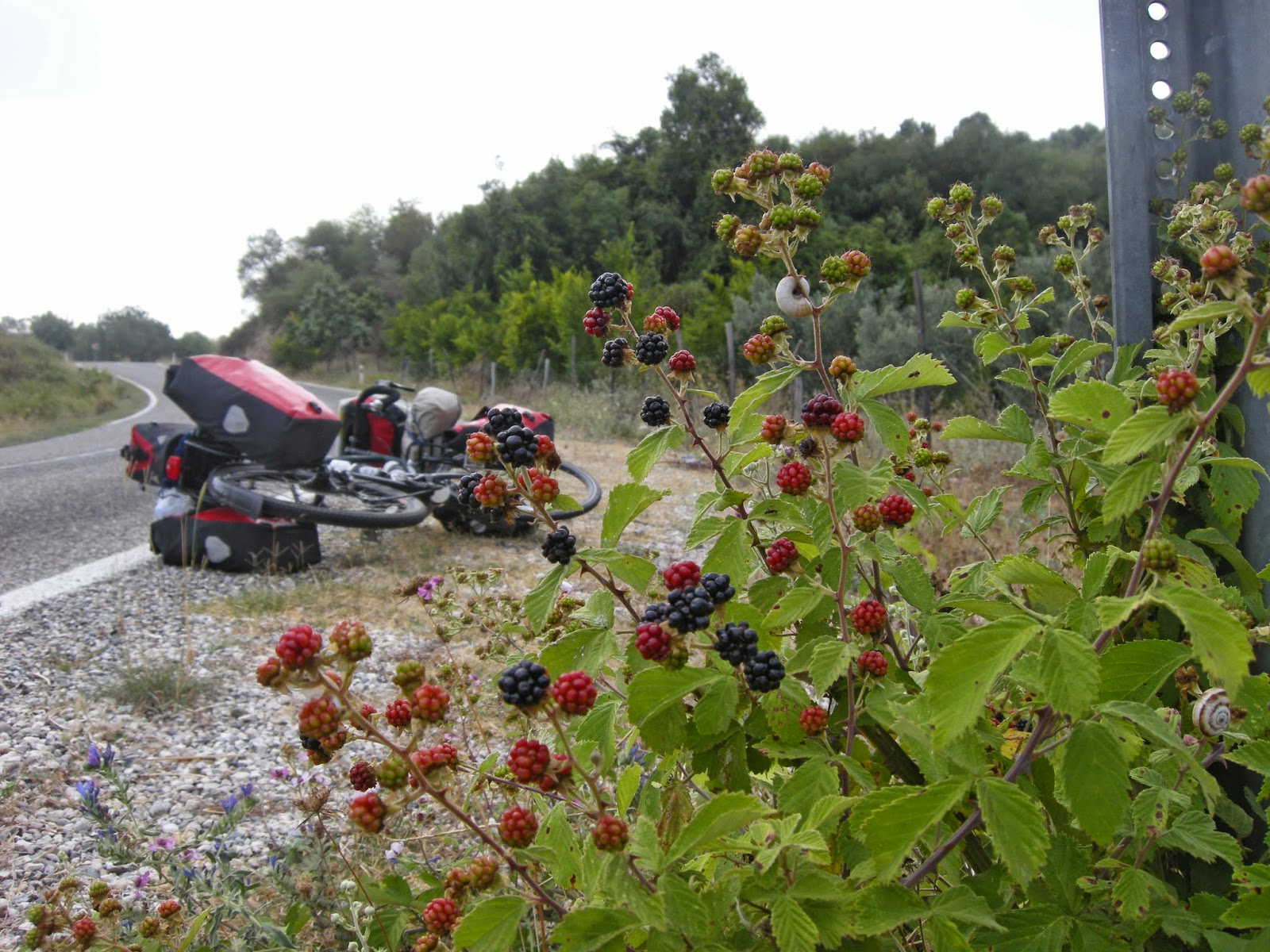 Heading north from Hieropolis Kastabala into Karatepe-Aslantas Milli Park, site of the ancient Neo-Hittite Palace, the rolling hills and mountainous passes offer serene calmness and beauty . . . and a good workout for cyclists.  The roads in September and August are lined with delicious blackberries, hmmm, the perfect sugar for cycling energy . . . I ate baskets full . . . , and frankly speaking, my bike in the picture below reminds me of my 1973 - 400 c.i. V8 Mopar Dodge Monaco with hydraulic flip-open head lights . . . , a bad motor scooter (notice the mag wheel in back)!! 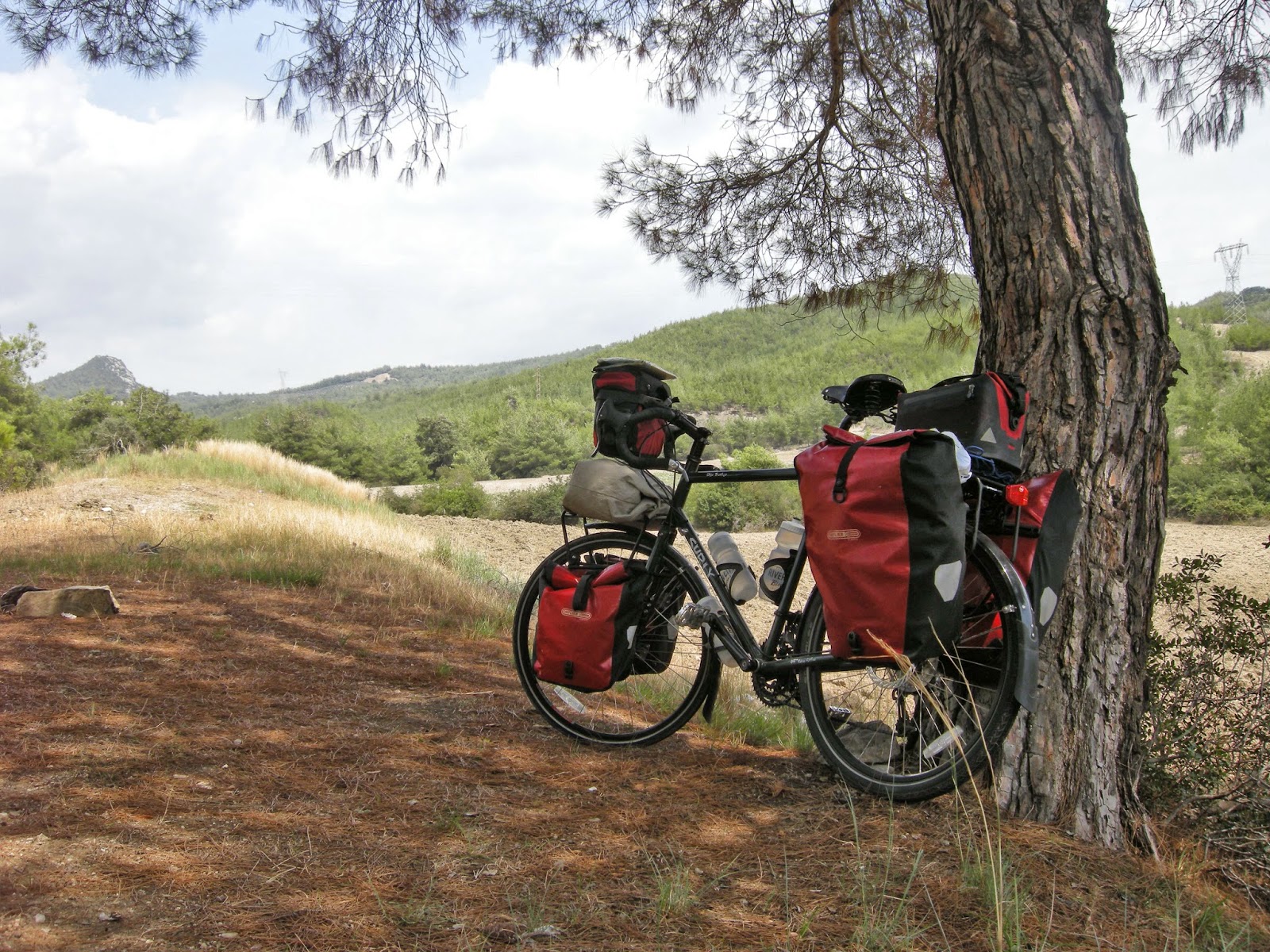 I arrived at the ancient site too tired and too late to squeeze in the ruins and the museum, so I kicked back at the kiosk, drank a giant bottle of ice cold cola, and watched the kiosk operator carve wooden kitchen utensils out of local pine.  The elevation offers a cool reprieve from the intense summer climate of the lower plain, which explains why this summer palace belonging to the Neo-Hittite King Asitawata was built where it is. 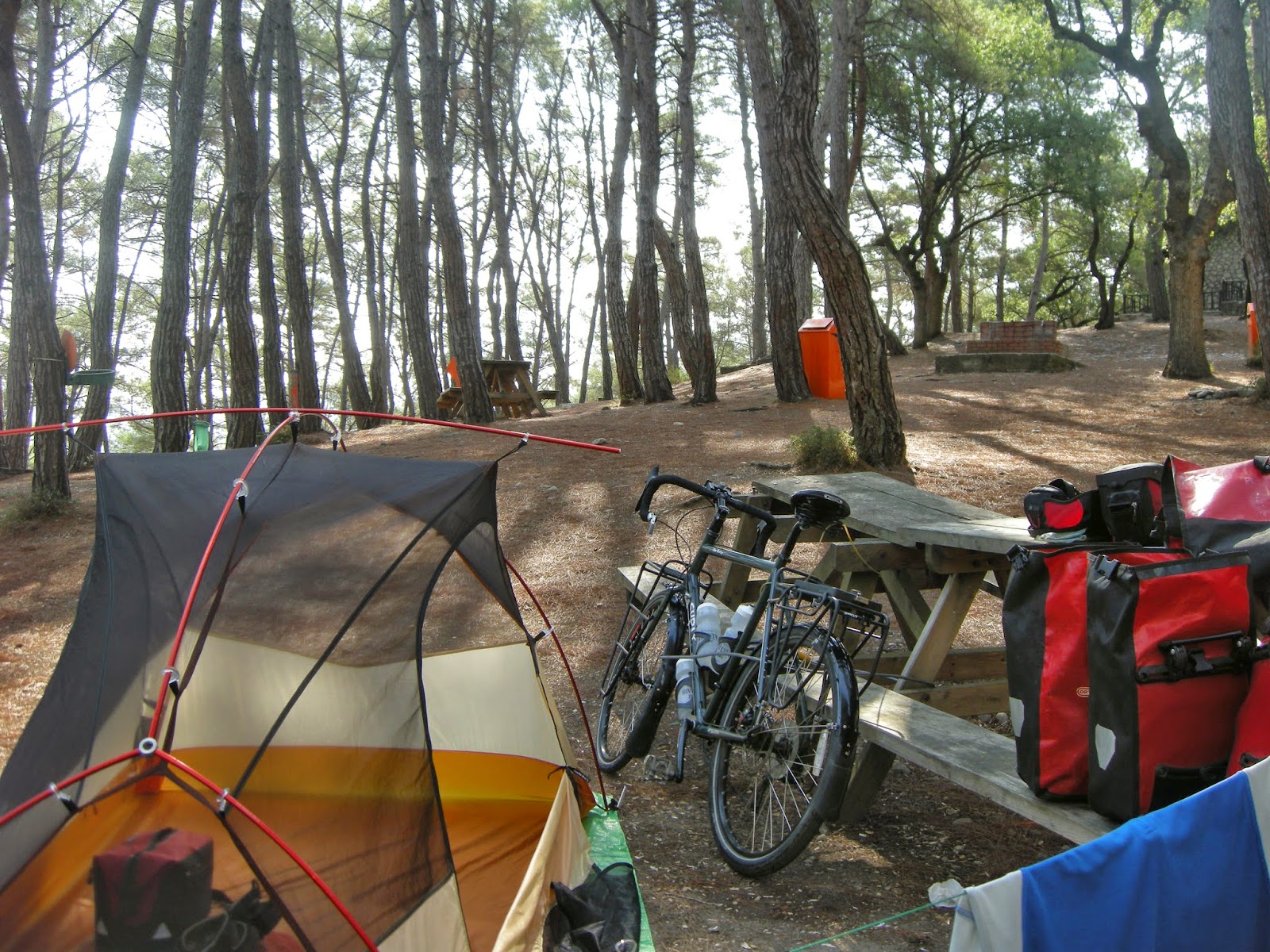 Pictured above, my $2 campsite, which is just outside the entrance to Karatepe; complete with a fresh water spring, toilet, shower, and picnic table. 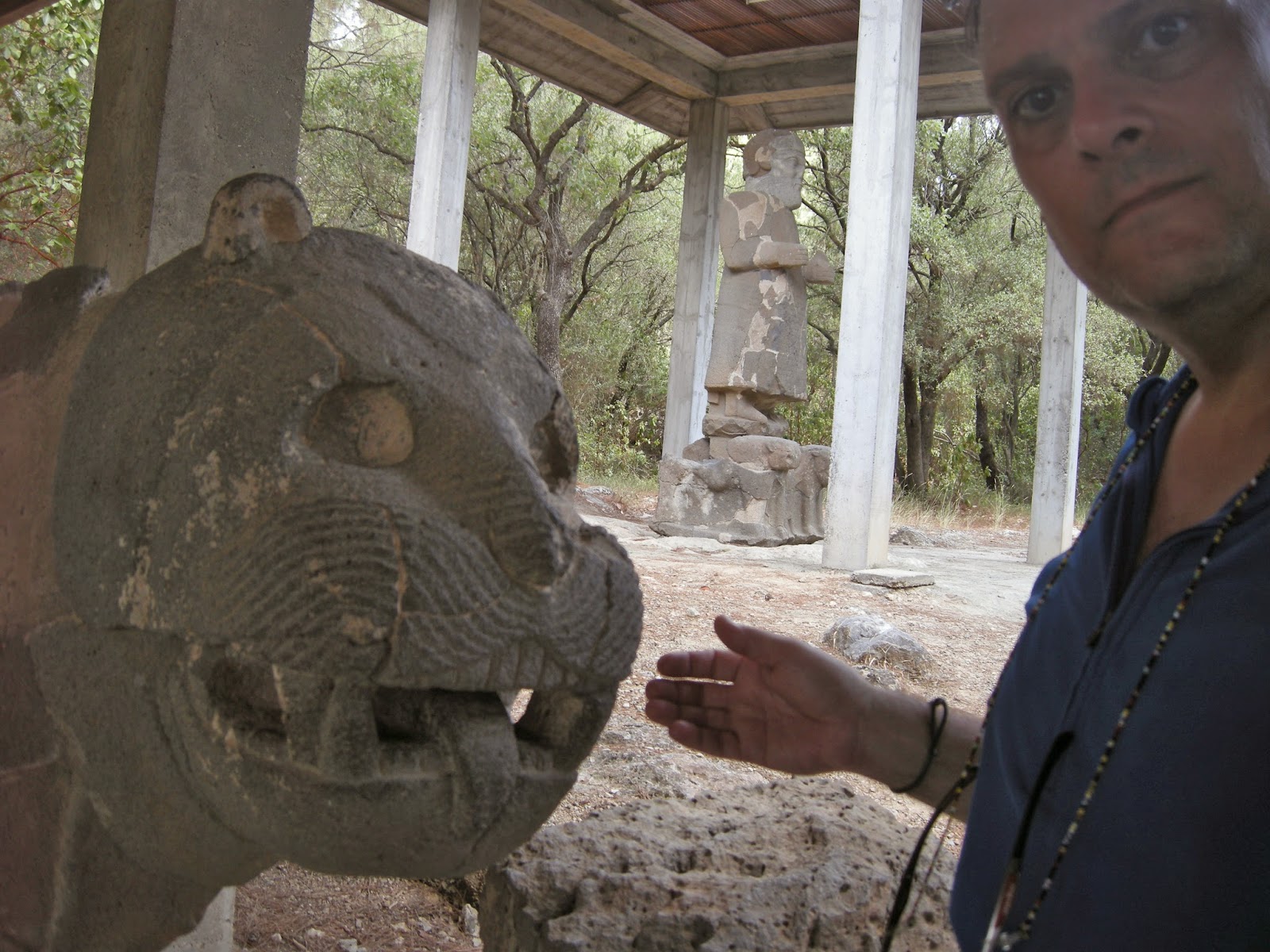 Following the glorious victories over the Egyptians and tragic defeats at Troy, the long and infamous history of the Hittite people and their kingdom between the second millennium BC and 1200 BC declined at the hands of a mysterious people described by the Egyptians as 'the Sea People', who ravaged the Eastern Mediterranean leaving the Hittites (amongst other peoples) scattered. The Hittites eventually found refuge in a few remaining pockets of their lands (in modern day Syria and the Taurus Mountains), of which the kingdom of Cilicia (which surrounds Karatepe) became one. 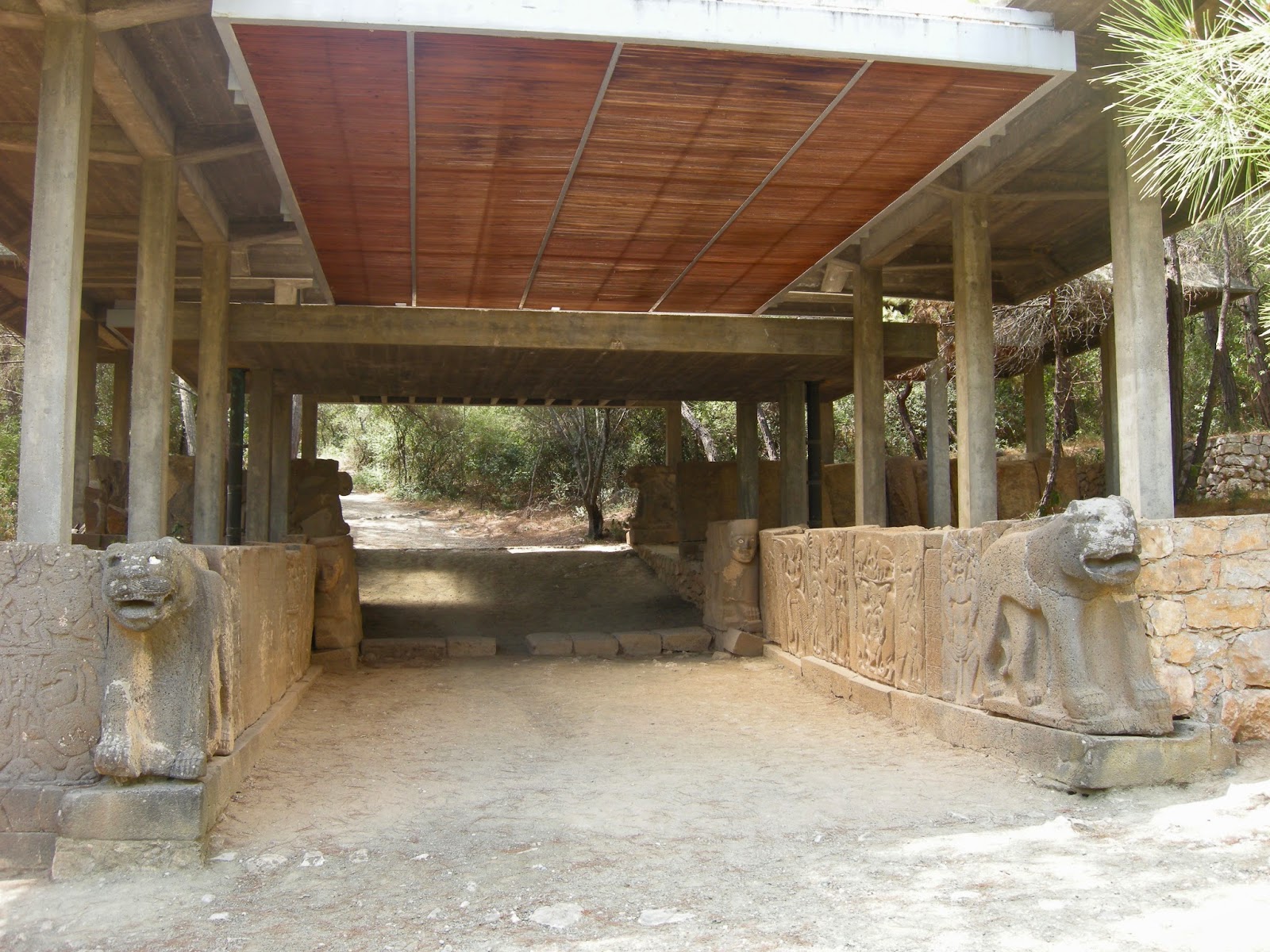 Lions guard the entrance to the summer palace of Antiochus, at Karatepe . . . 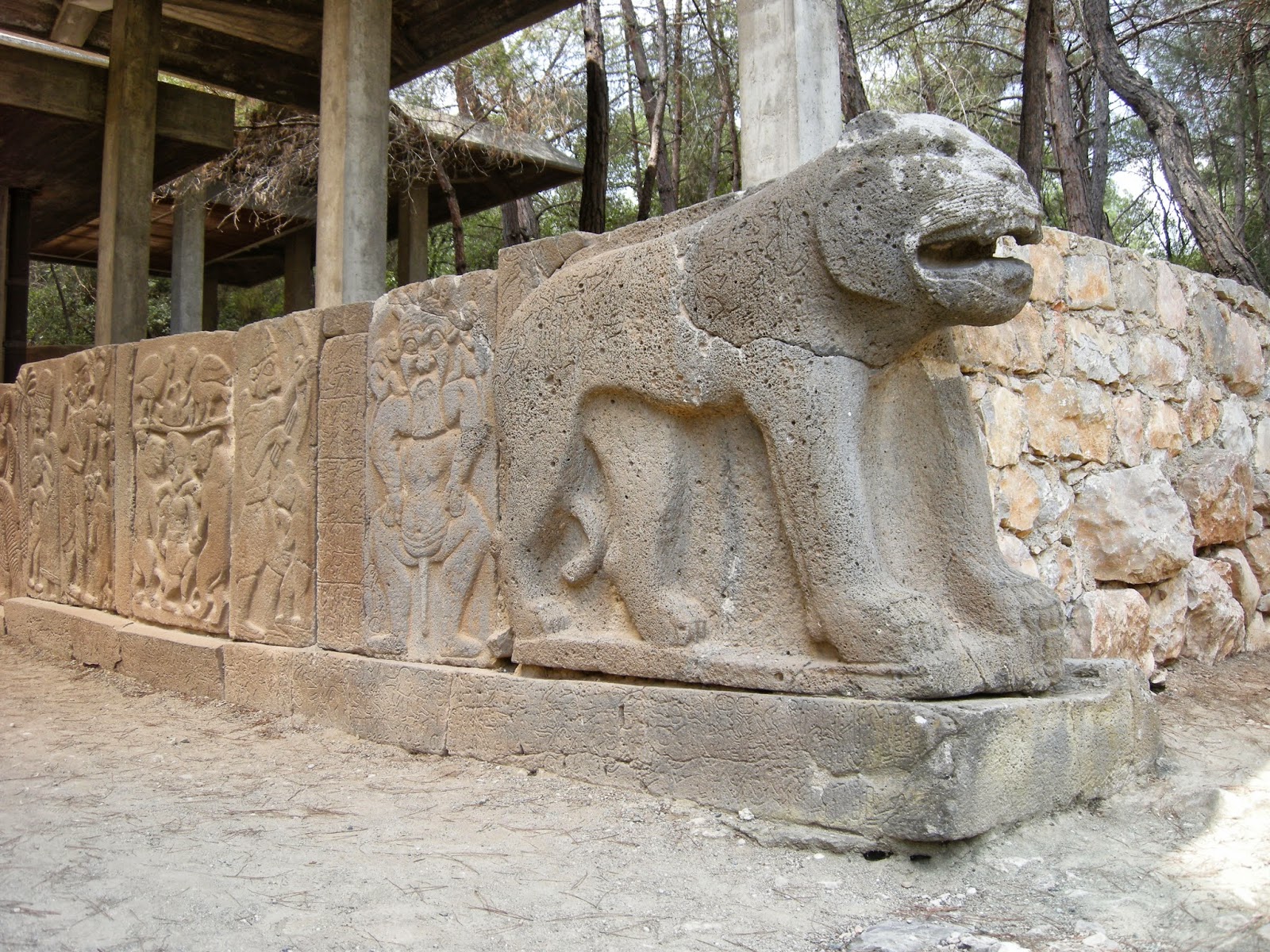 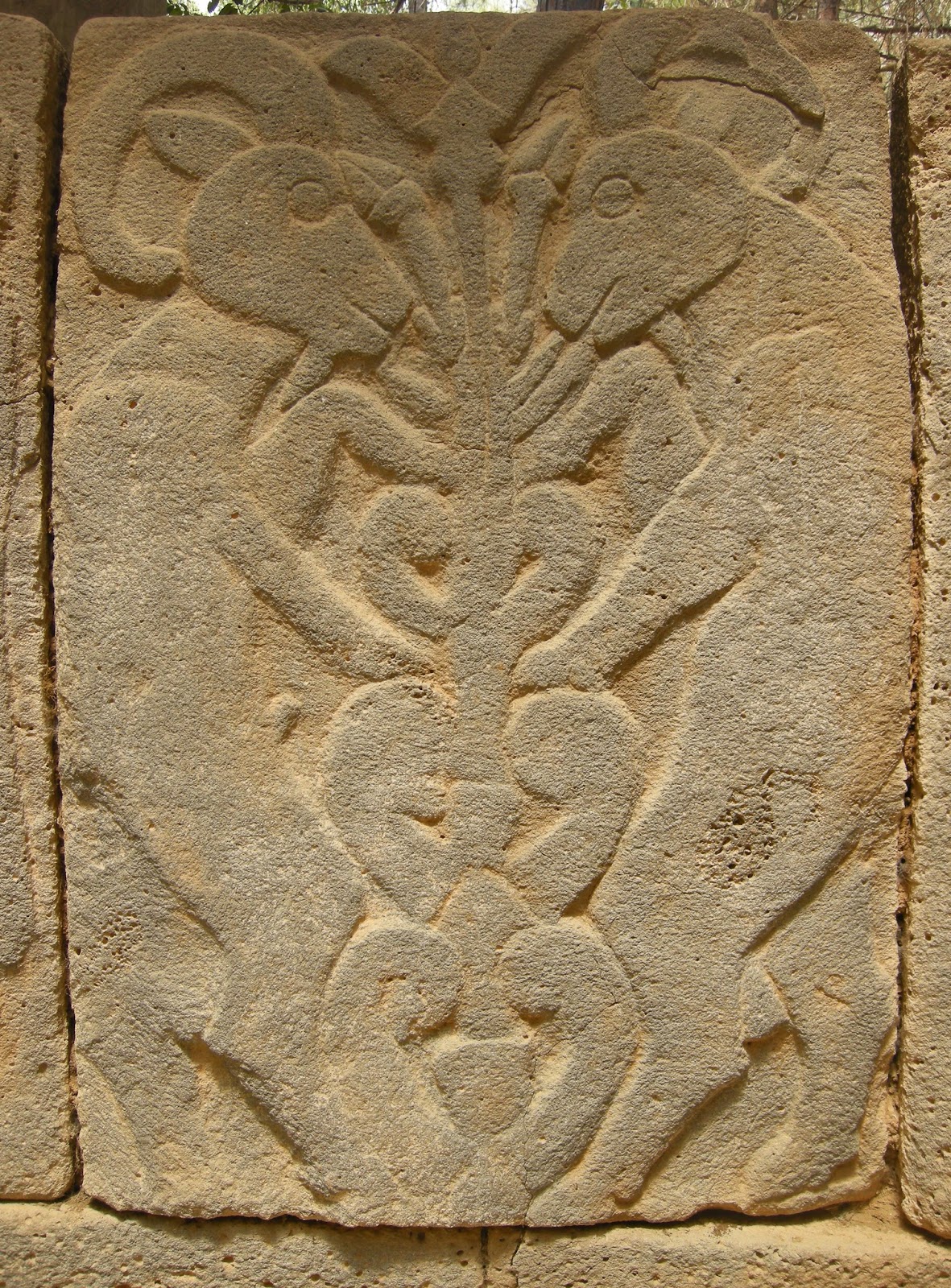 Fertility is a major theme amongst the reliefs at Karatepe; pictured above, a representation of the tree of life, male (erect penis) and female continue the cycle of birth as hooves and horns blossom as a result of their procreativity.  Pictured below, the story of legends and myths told in Neo-Hittite hieroglyphs. 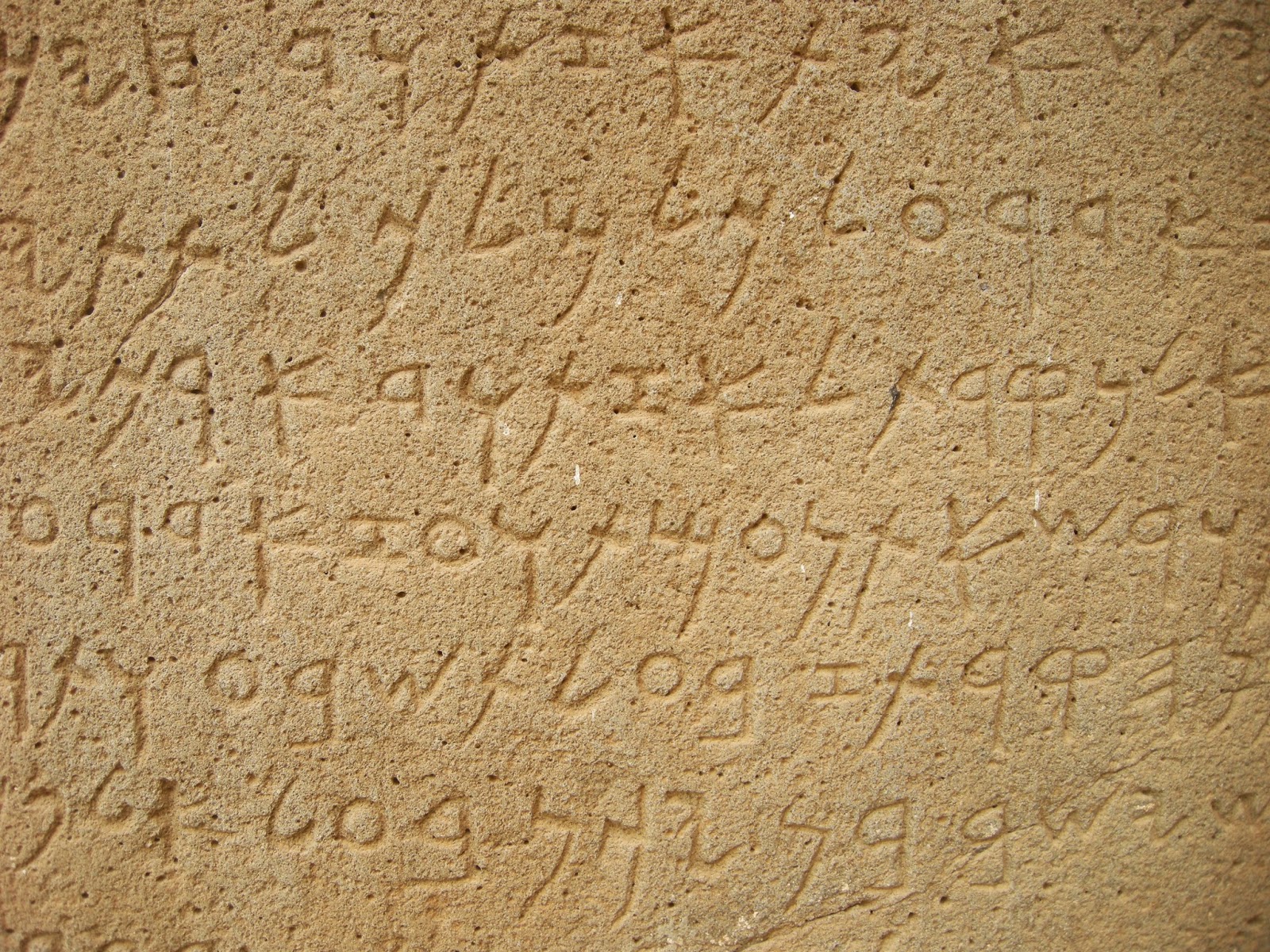 As is written in ancient Neo-Hittite hieroglyph reliefs at Karatepe, the ruler Asitawata describes himself as belonging to the 'House of Mpsh', whoch is usually ascribed to Mopsus, the legendary founder of Mopsuestia and various other cities in Asia Minor. 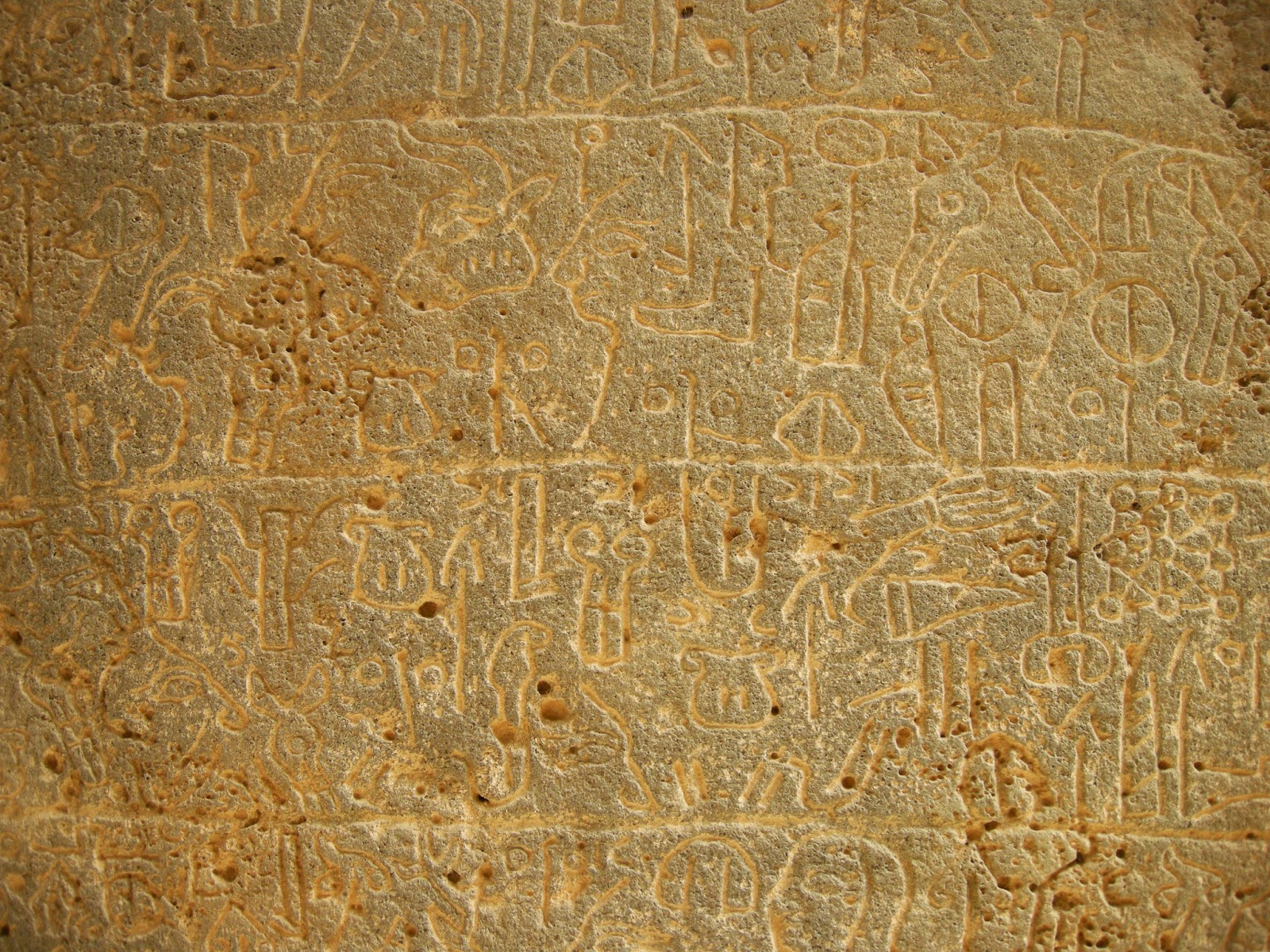 Hieroglyphic inscriptions on some of the orthostats at Karatepe refer to a people called 'Danuna' and 'Danauna', which may have been the 'Danaoi', who Homer mentions in the Iliad, and who fought on the Achaean side.  Some 500 years after their kingdom was destroyed, the remaining pockets were eventually taken over by the Assyrians, and the Neo-Hittite culture eventually obscured as remnants and without recognition within other dominating belief systems. 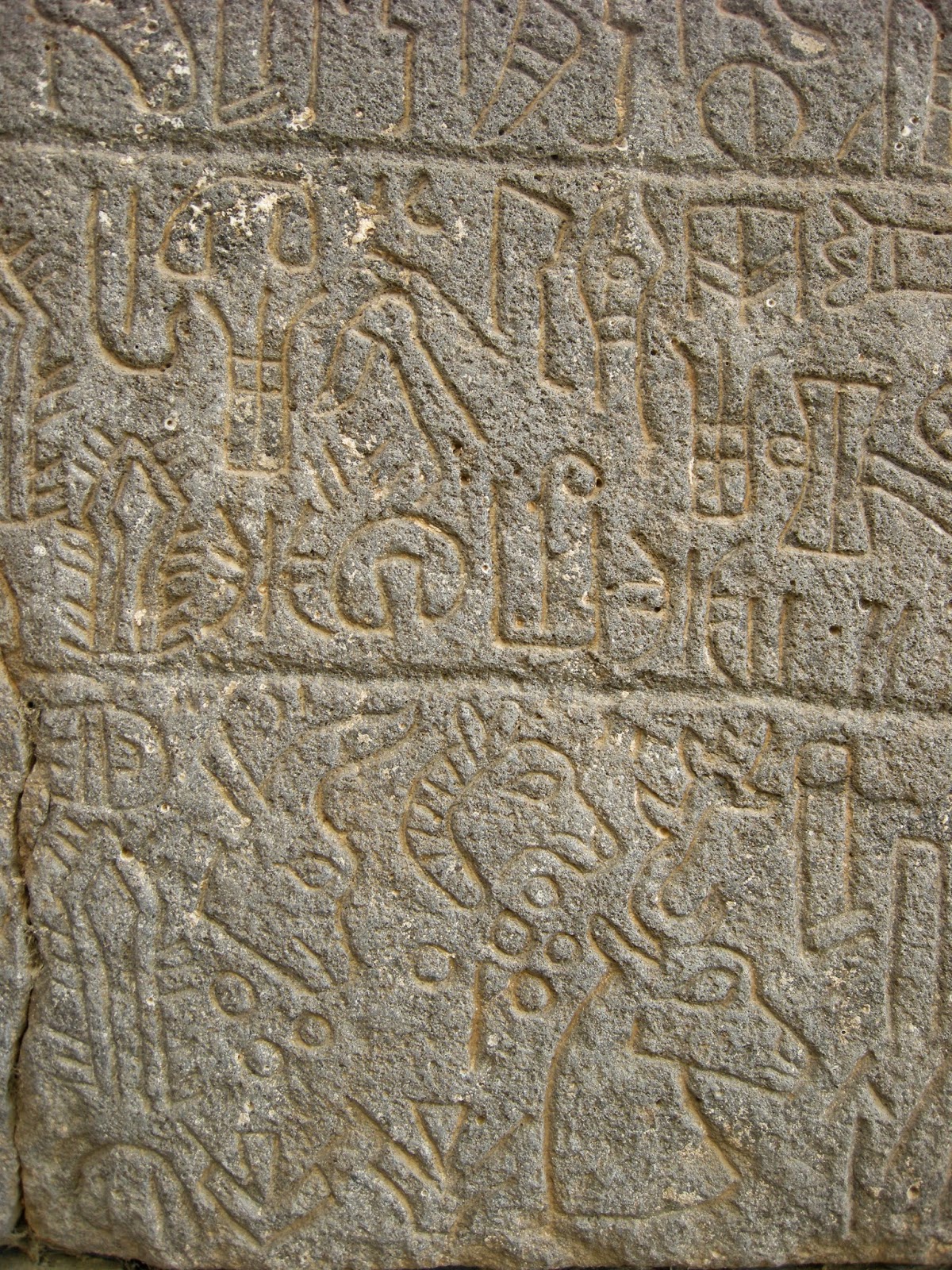 Pictured below, a fertility god with hanging penis entertains the admissions of mortal monkeys, which inhabit his shoulders and oratory orifices. 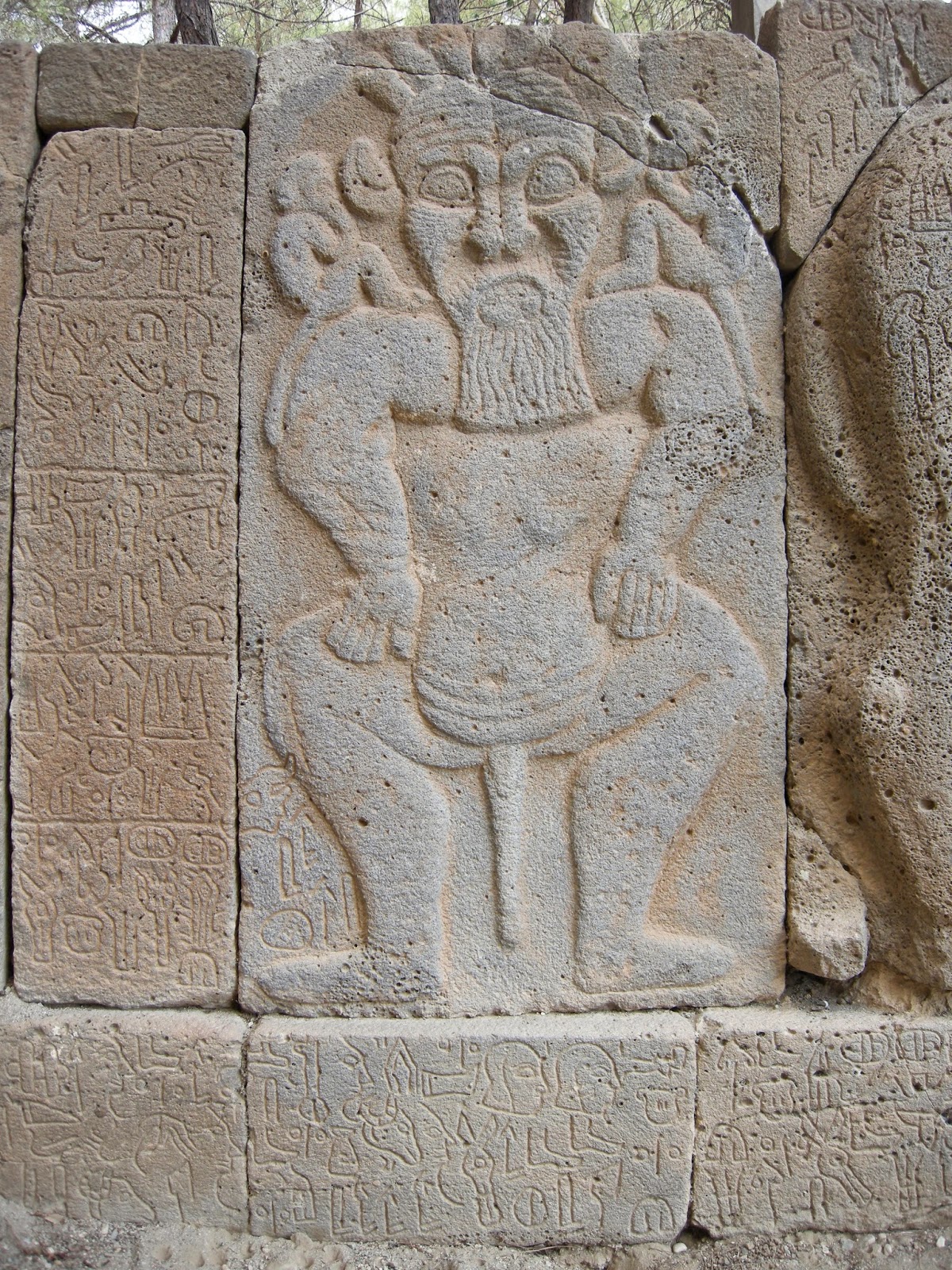 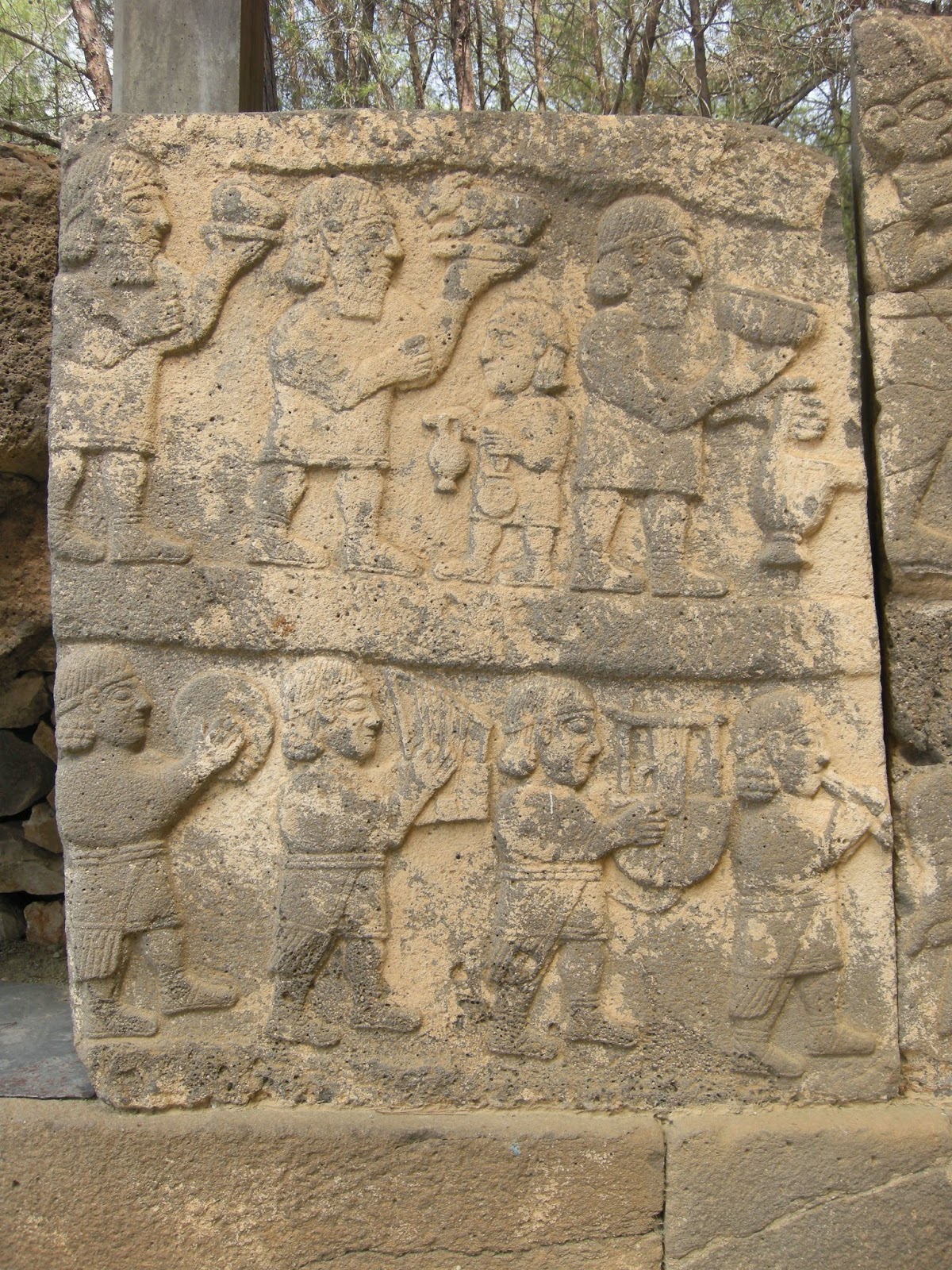 The fruits of cooperation in battle and in community are brought to the kings table in the form of a feast (as pictured above and below). 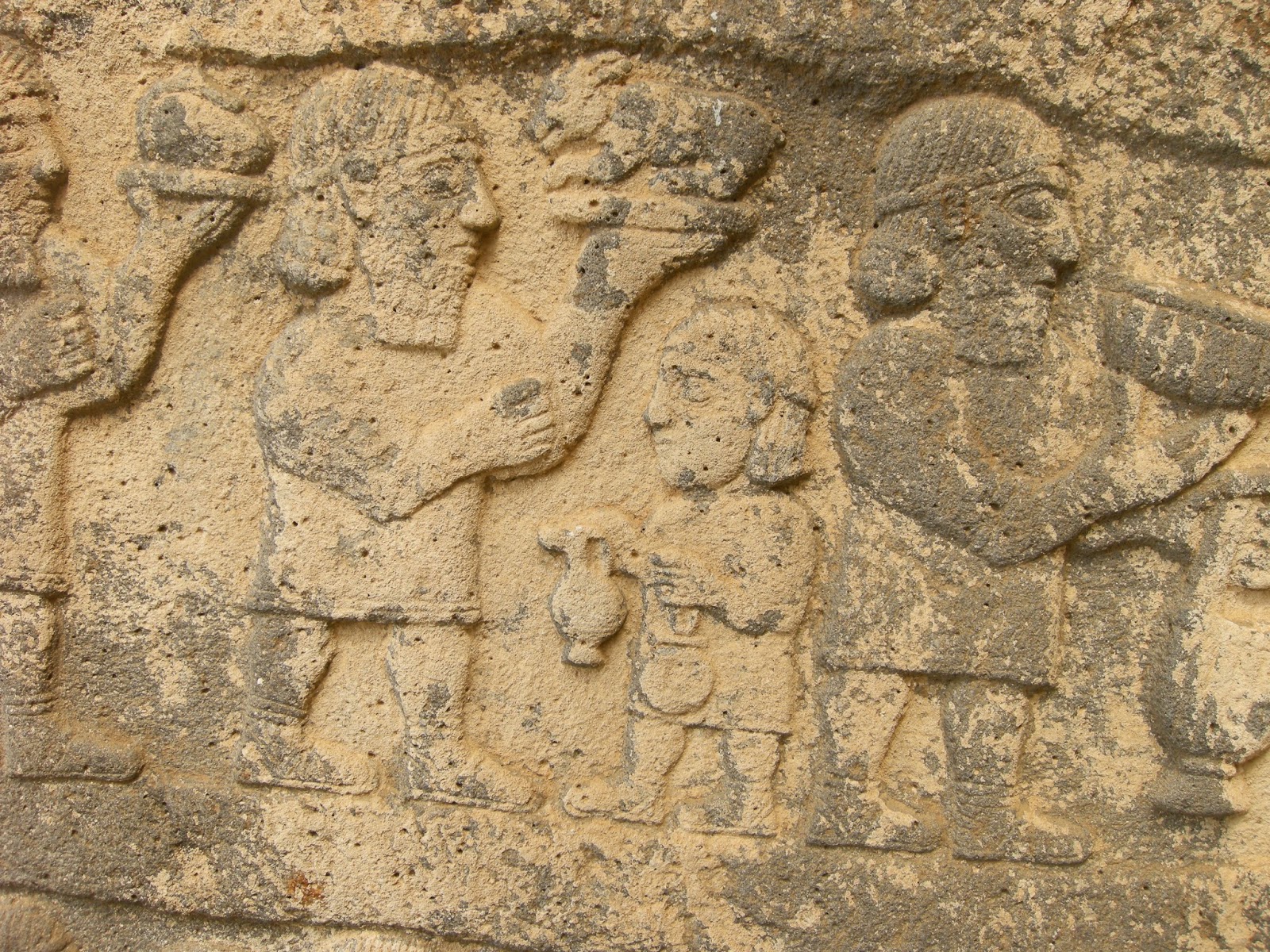 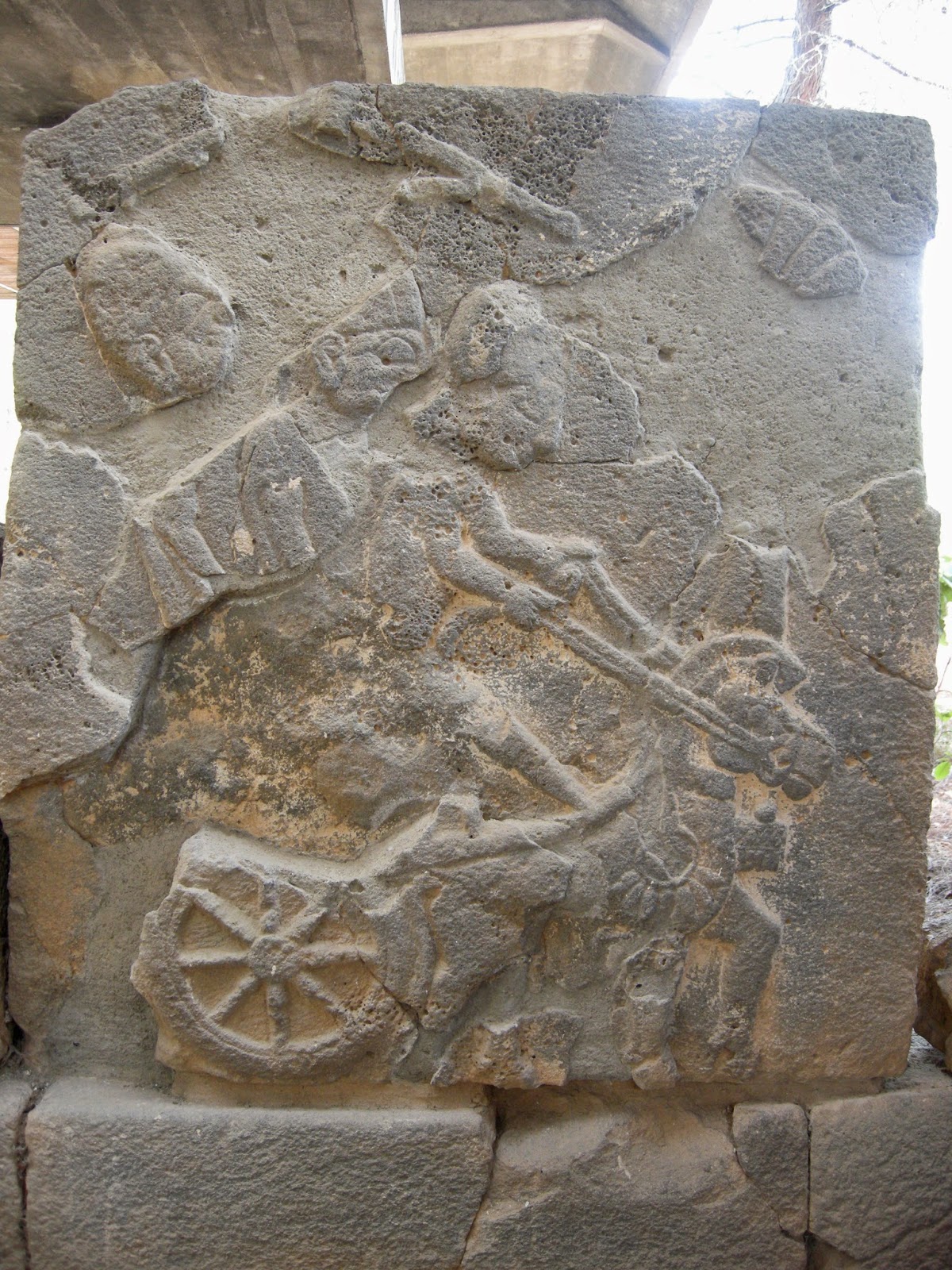 Perhaps telling of a glorious past, pictured above, soldiers on chariots ride into battle. 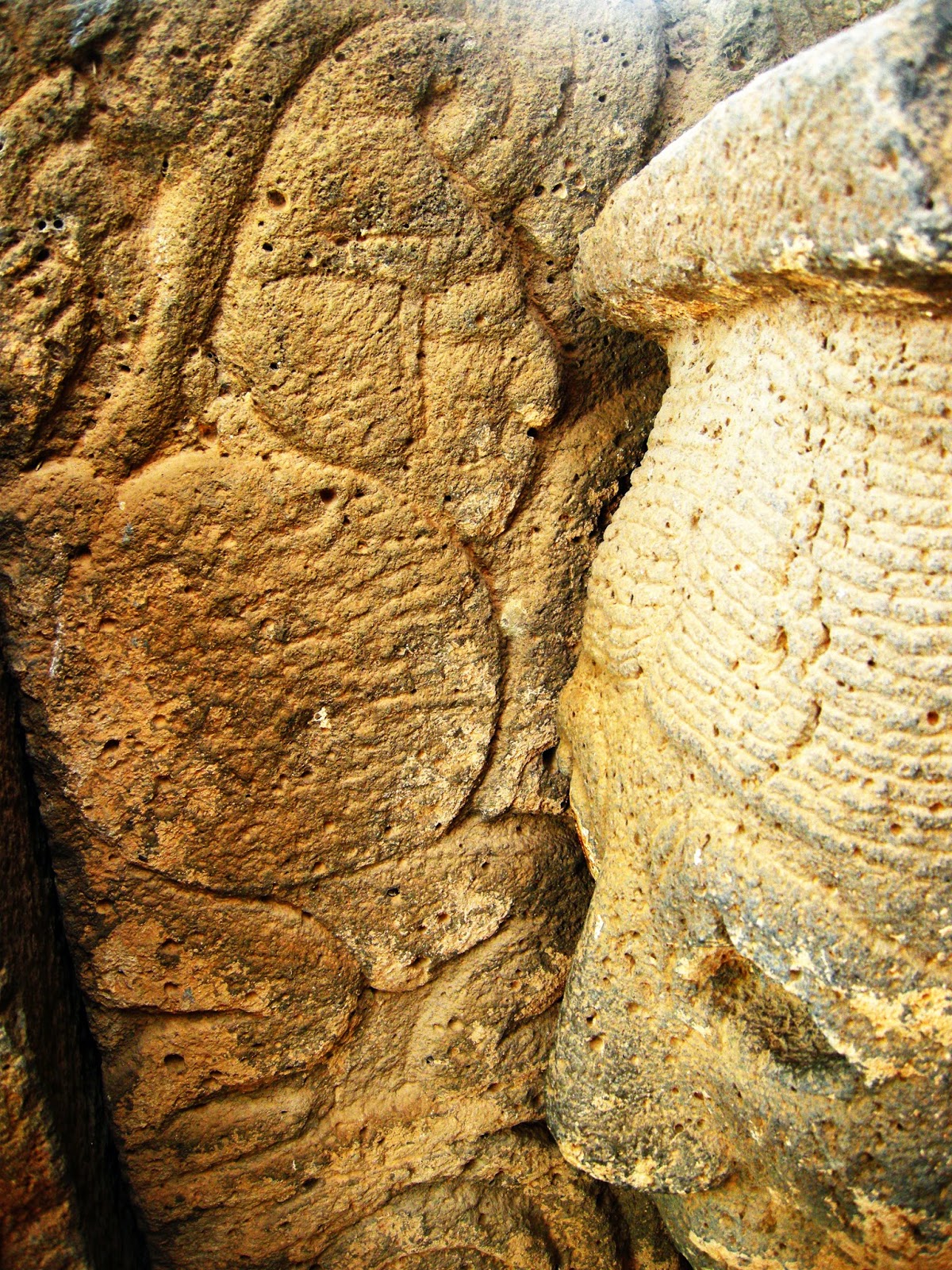 Pictured above and below, the warrior, man and patron of the Hittite. 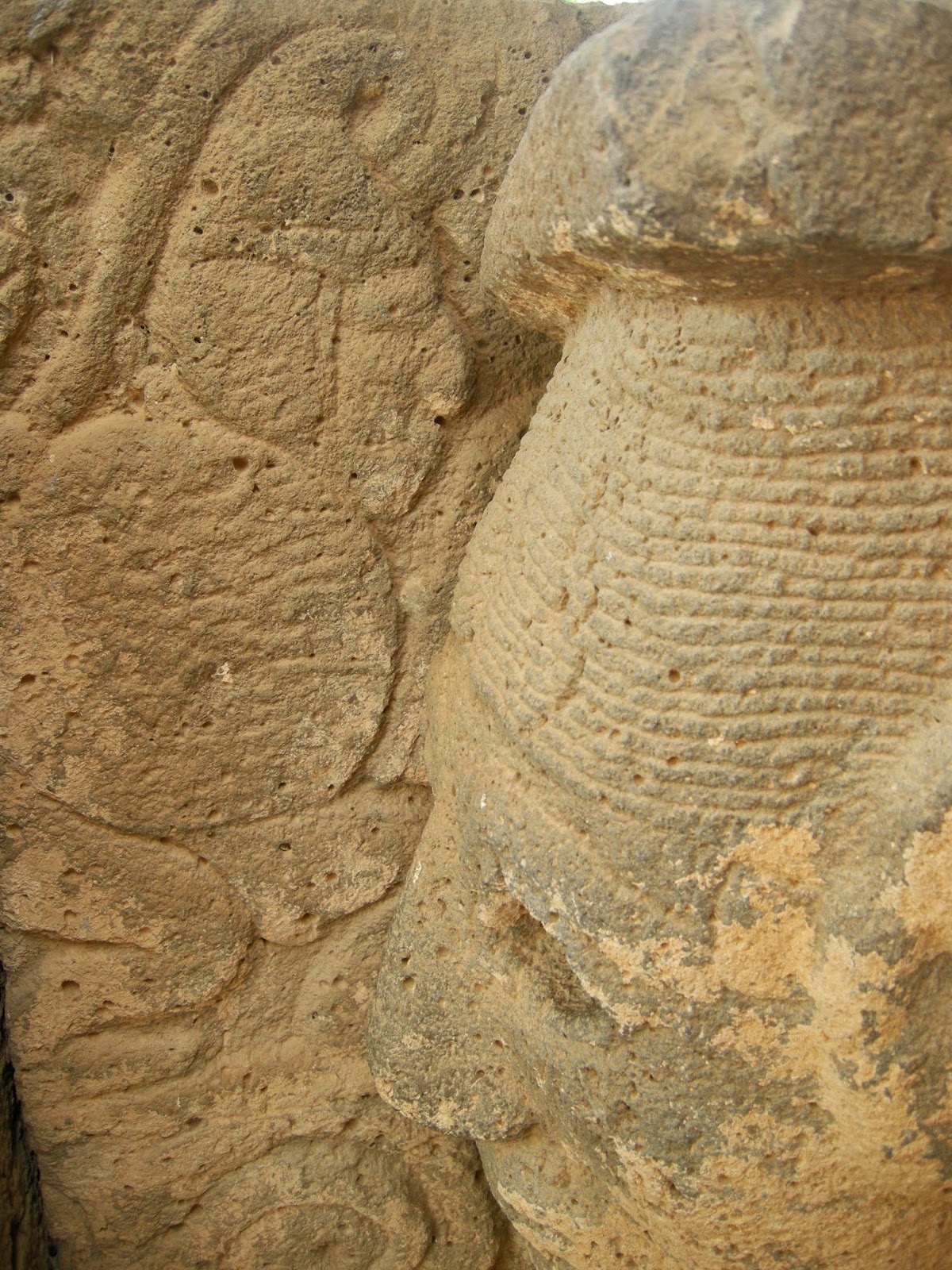 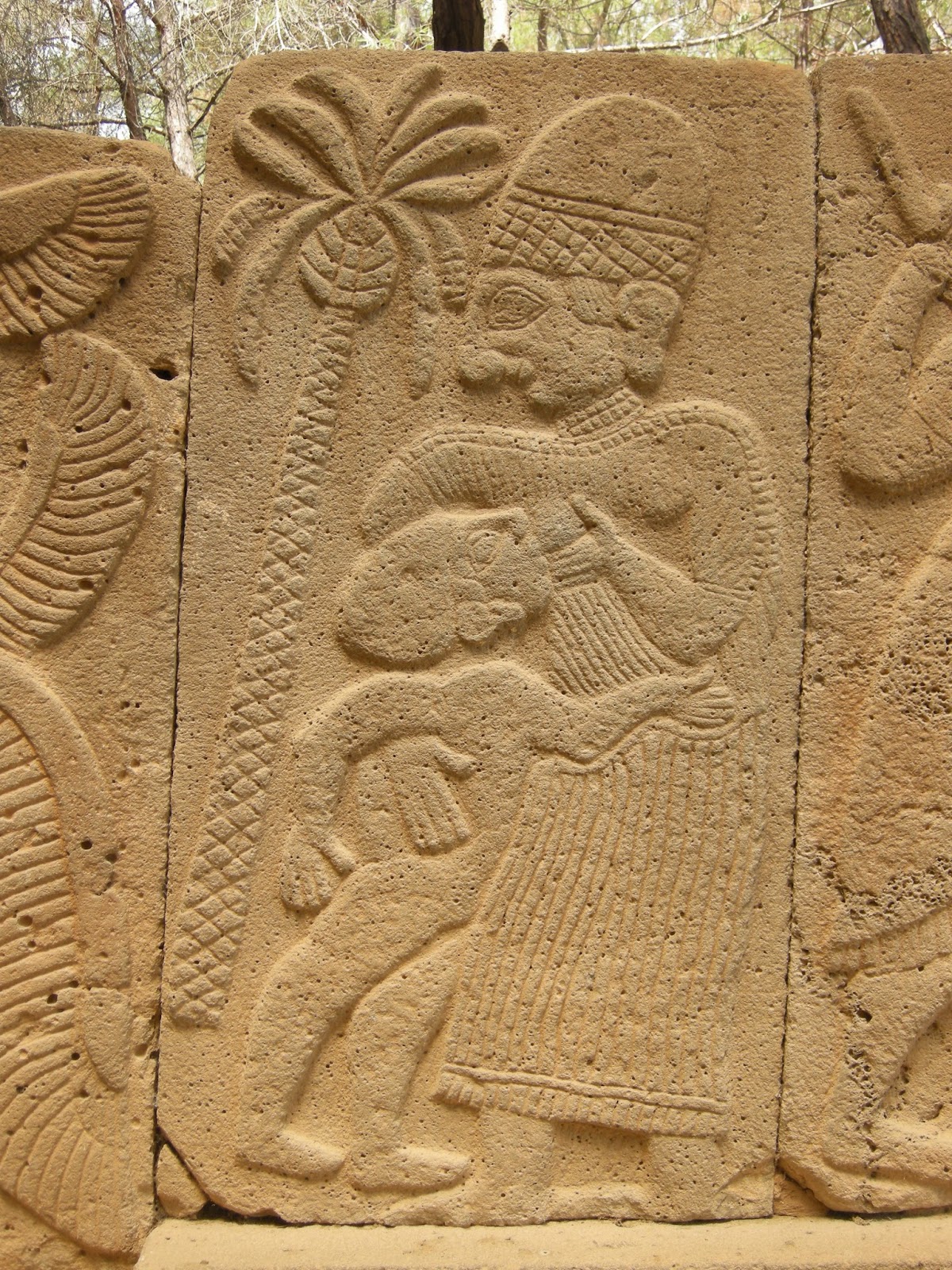 Pictured above, a relief of a suckling child.  Below, the solar disc buzzard god commands the rise and fall, the warmth and cold . . . life and death . . . 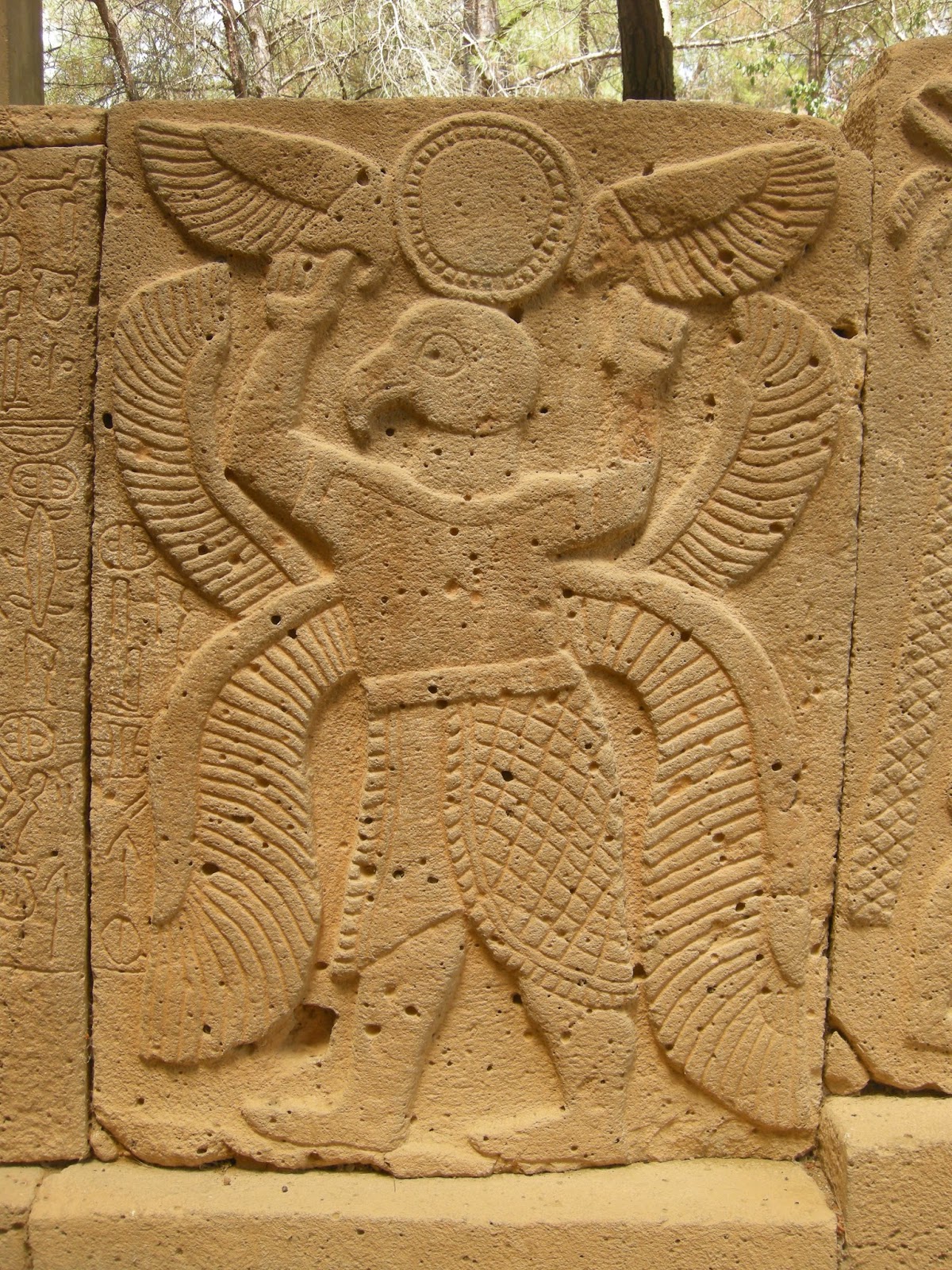 Pictured below, a ship sails the seas for commerce and for war beyond the Hittite lands. 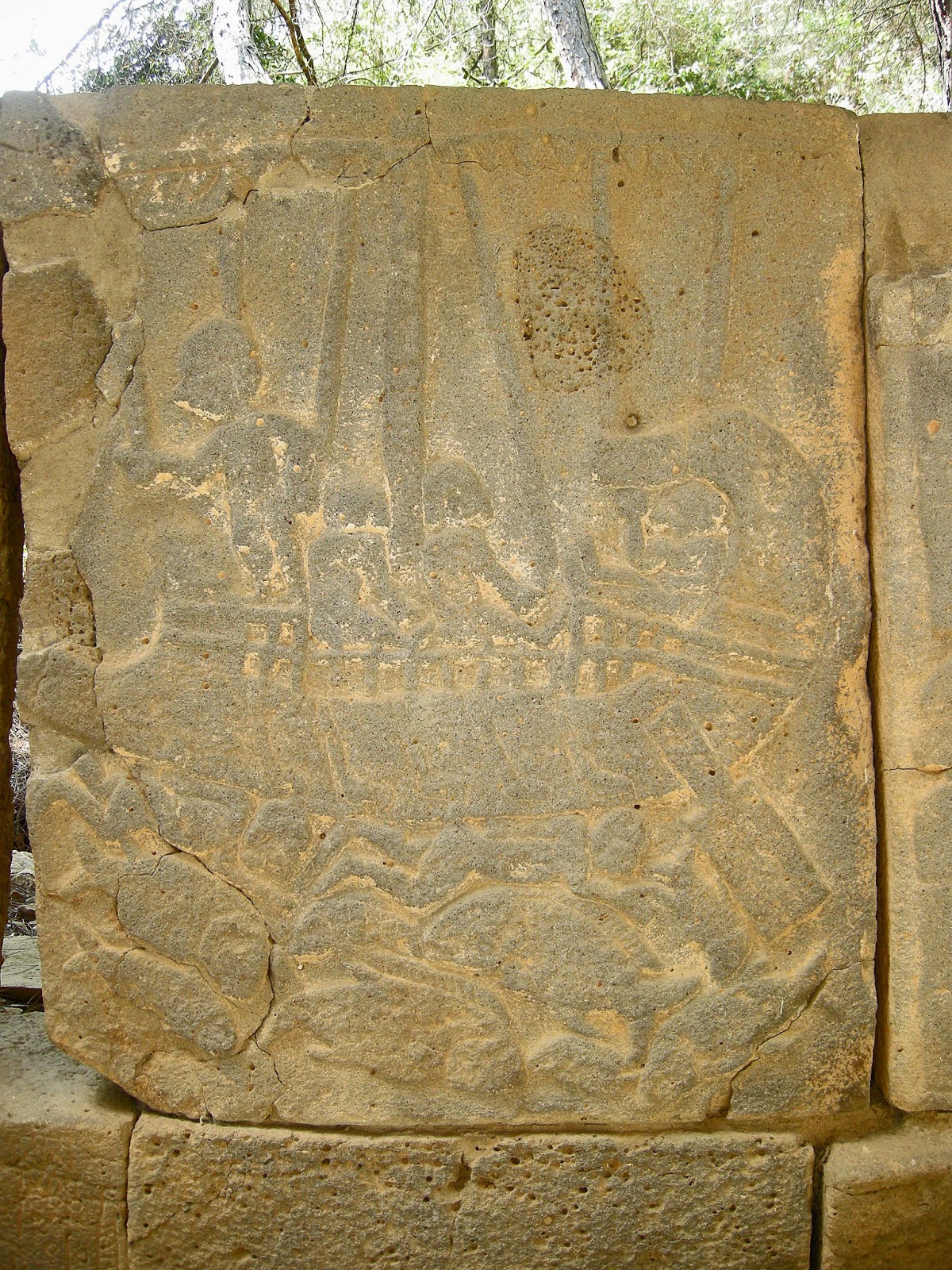 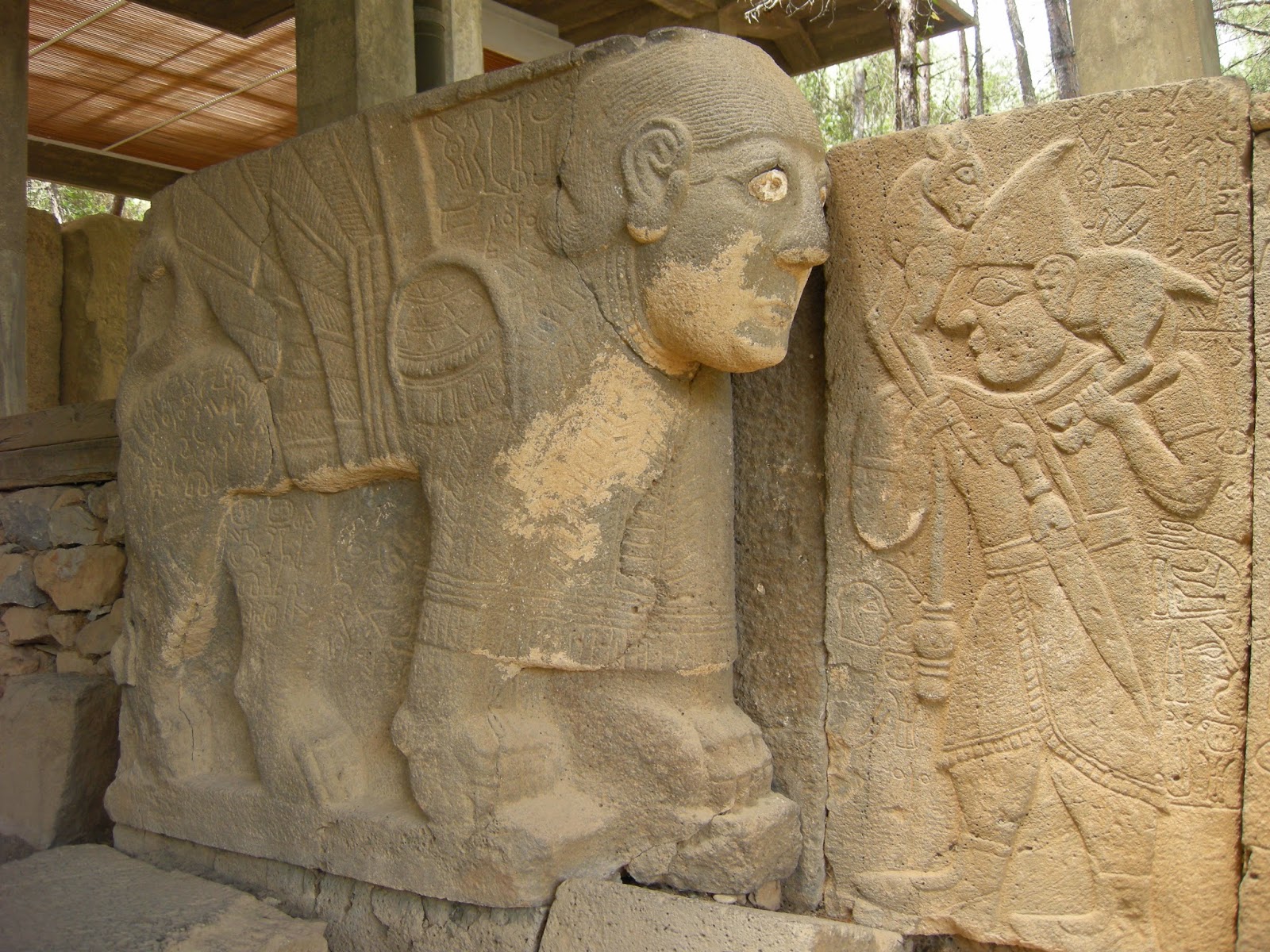 Above, the palace gate is guarded by representations of a lions, while below, a representation of a sphinx guards another palace gate.  On the orthostat in front of the sphinx, a hunter carries his prize.  Falling within the same time period as Mycene of Pelopponese and Knossos of Crete, the ruins of the Neo-Hittite palace at Karatepe are in an exquisite state of preservation! 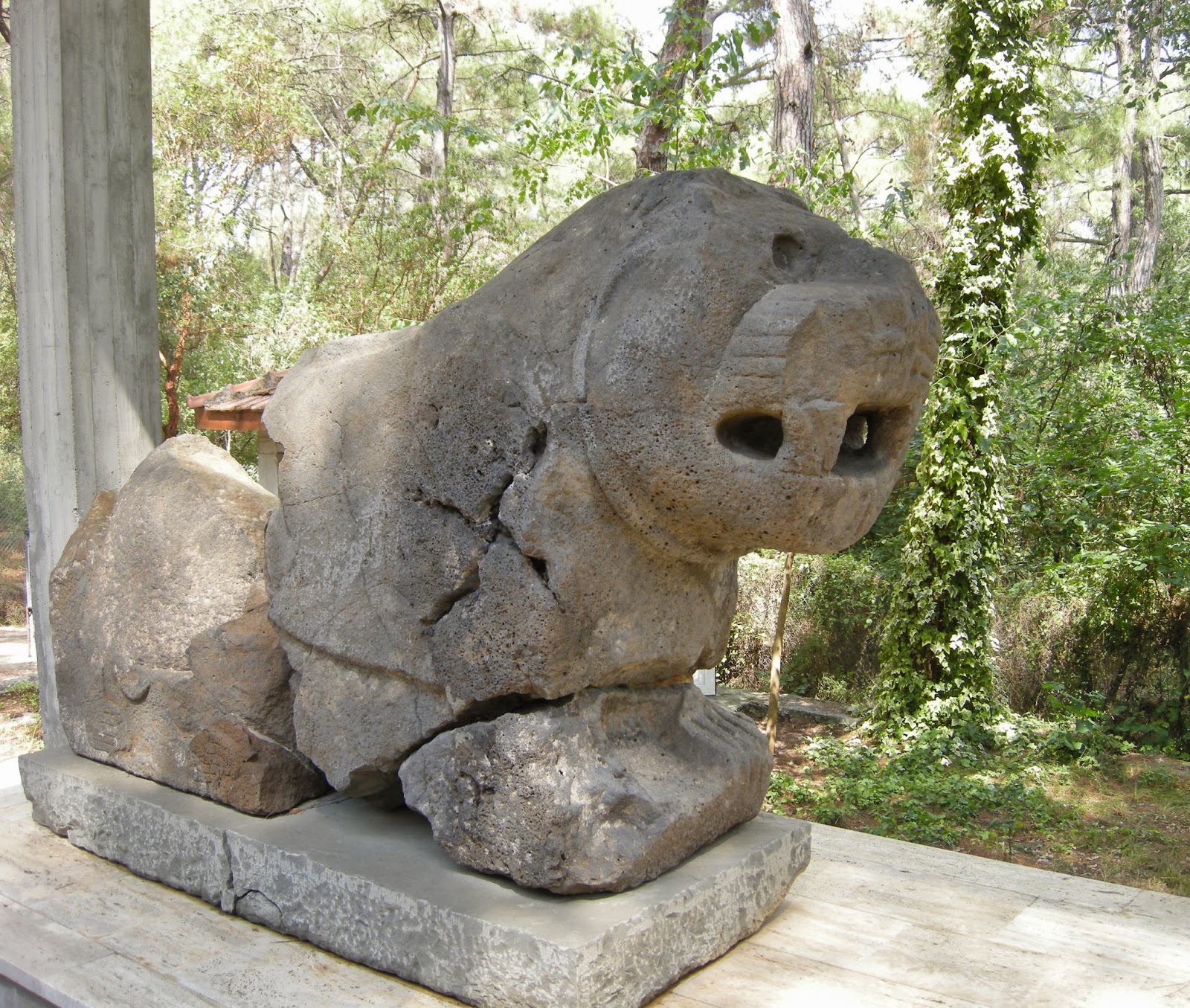 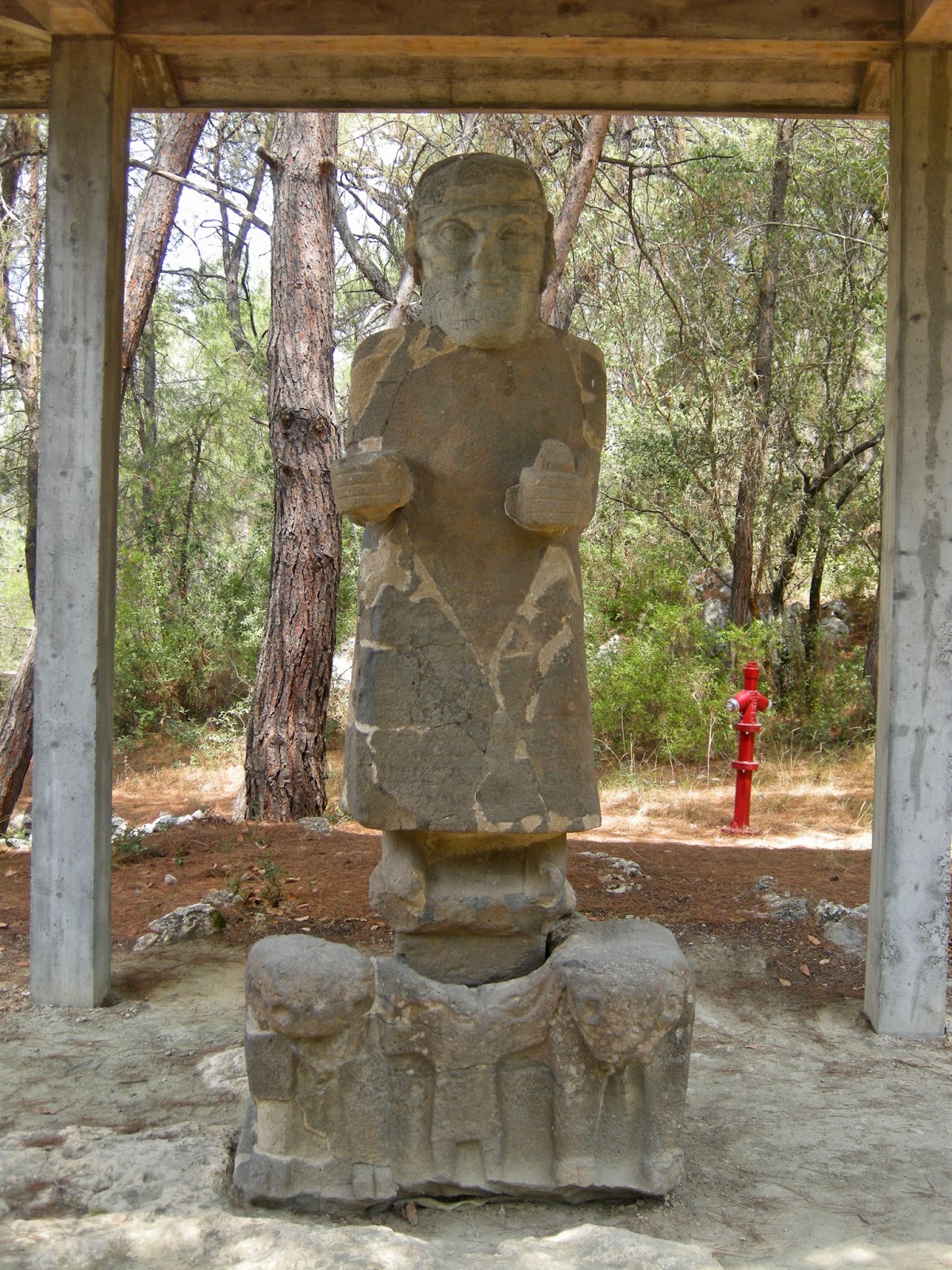 Pictured above, a Hittite statue greets the royal guests with opened arms of law and order.  Below, some Hittite pottery adds 'question' to the ancient culture. 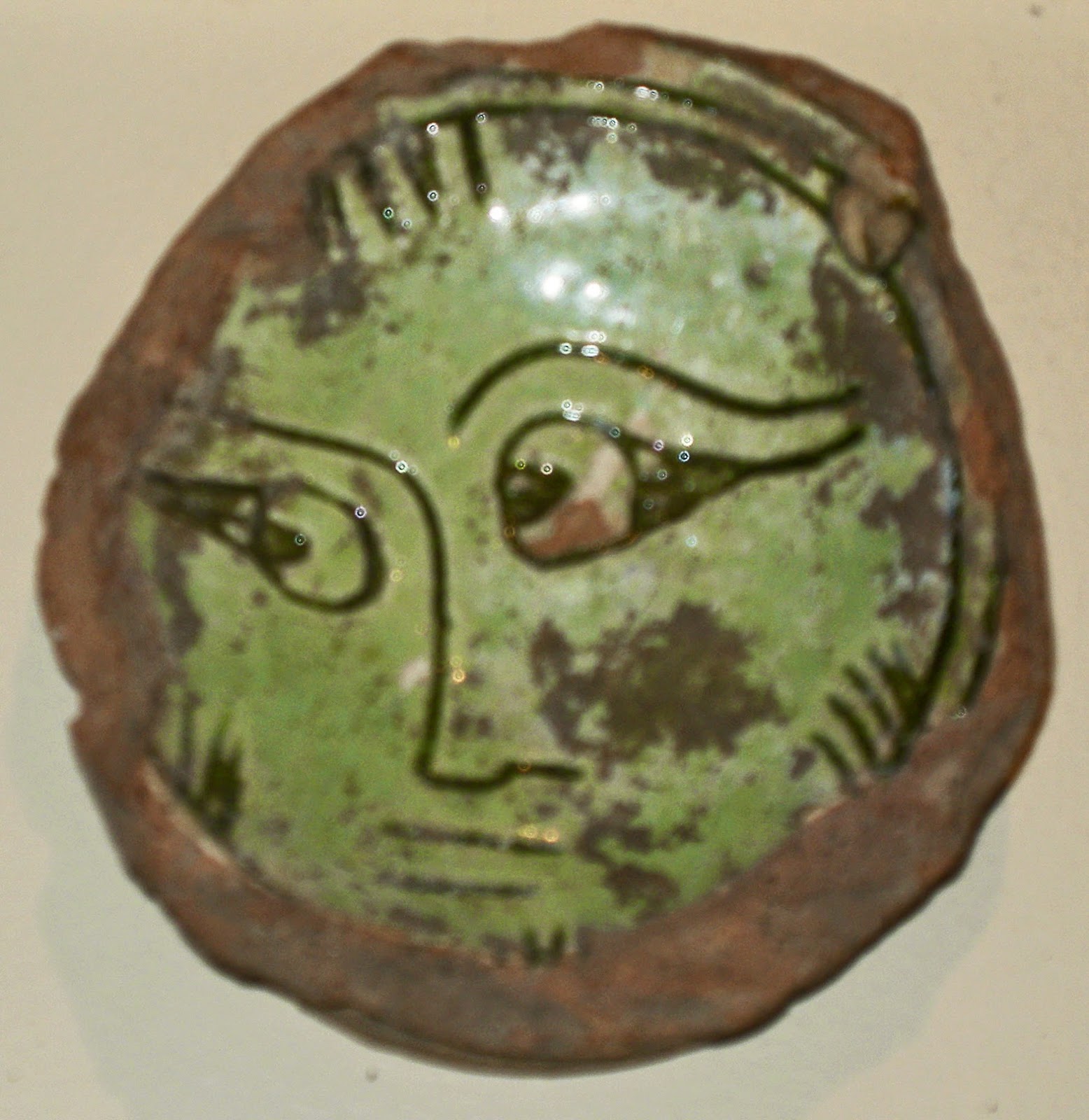 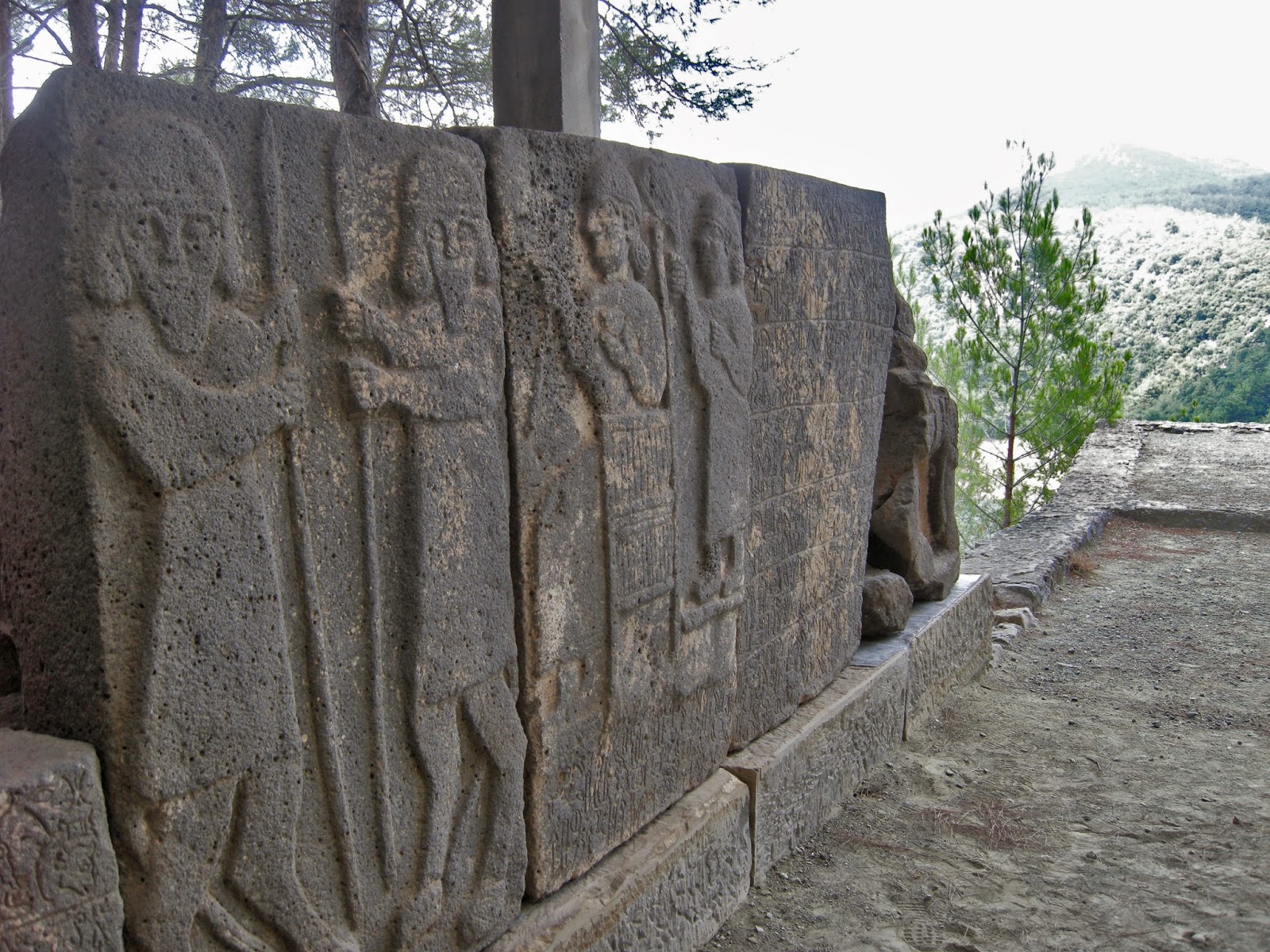 Above and below, domestic activities such as hunting, feasting and carrying out the formalities of royal life dominate everyday activities. 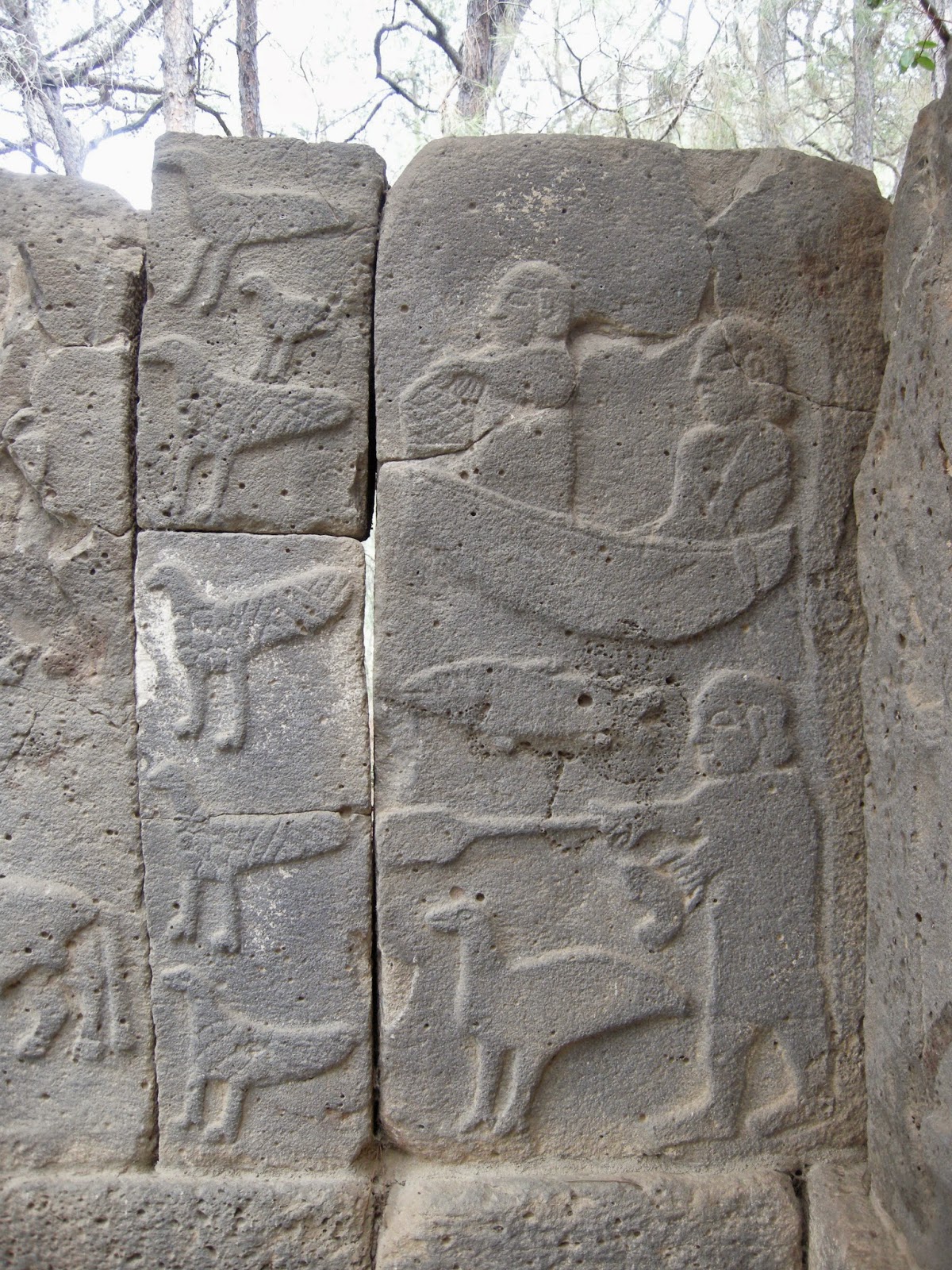 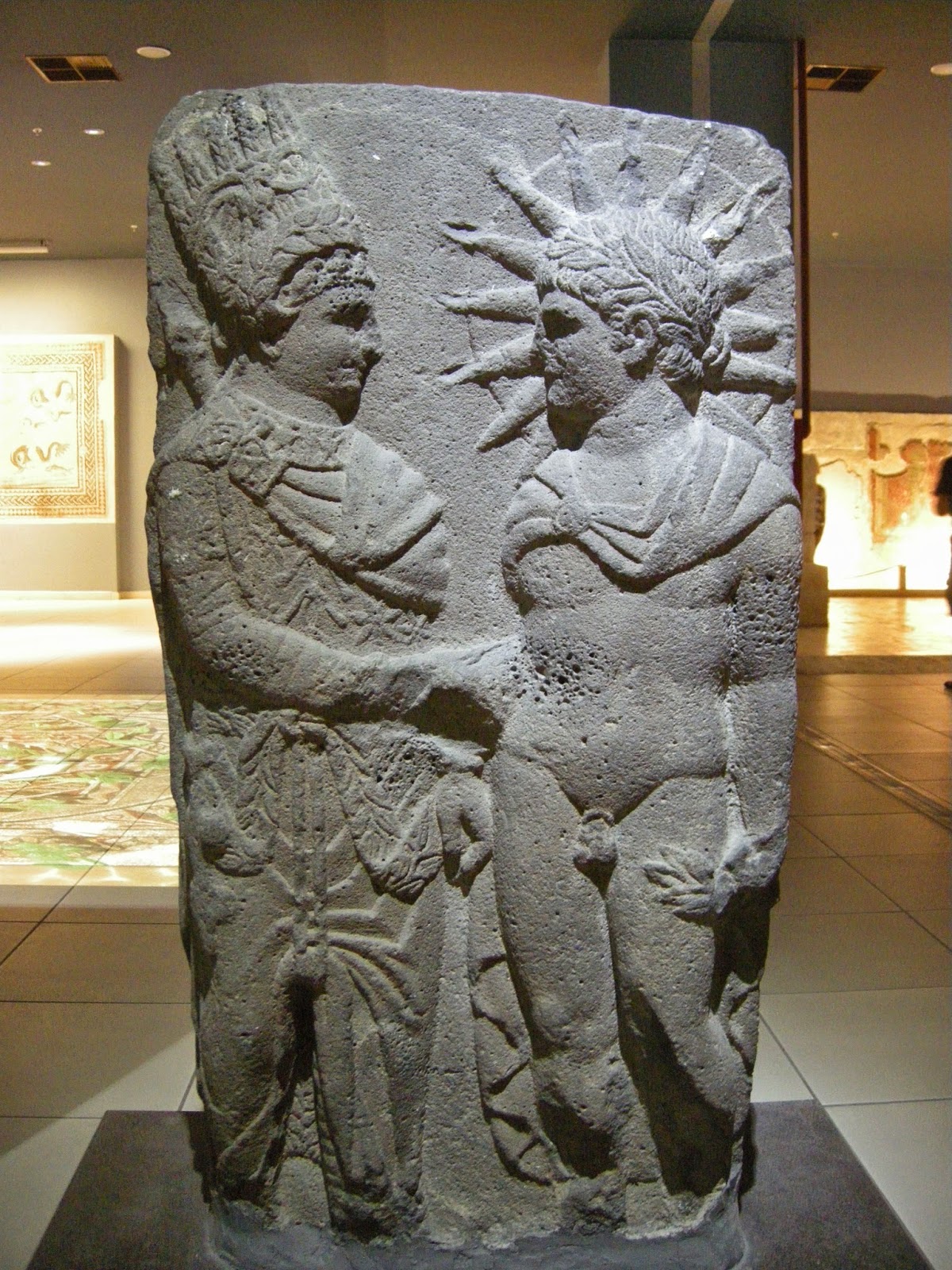 Pictured above, a stele with a relief of Antiochus greeting the god Helios.  Below, Antiochus greets Hercules on another stele relief.  Both stele have script on the sides describing the thoughts of Antiochus with regard to the Commagene lands, gods and those who fall within its boundaries. 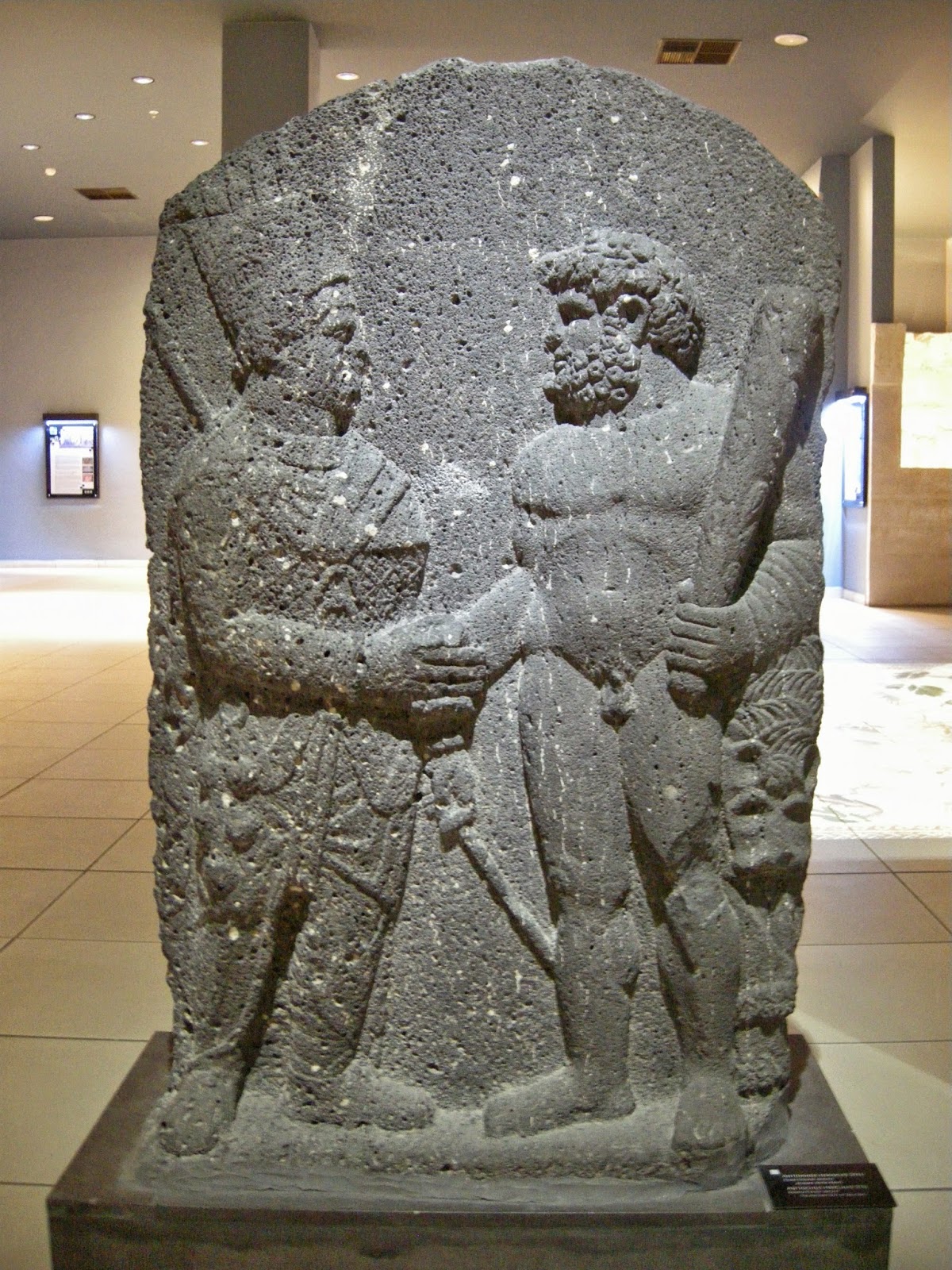 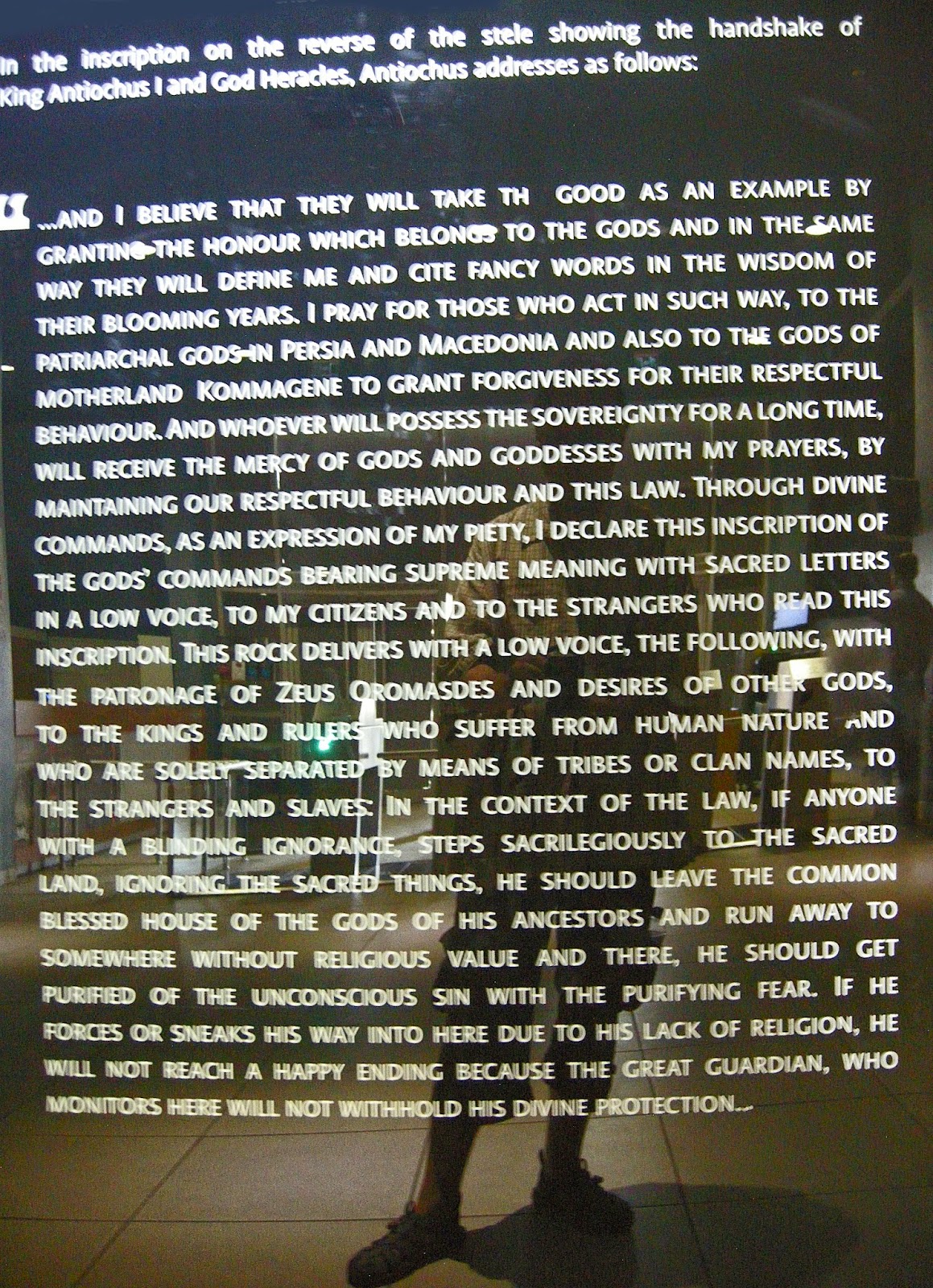 As can be seen in the picture below, the side of the stale (both) are adorned with inscriptions, as desiphered in the photo above. 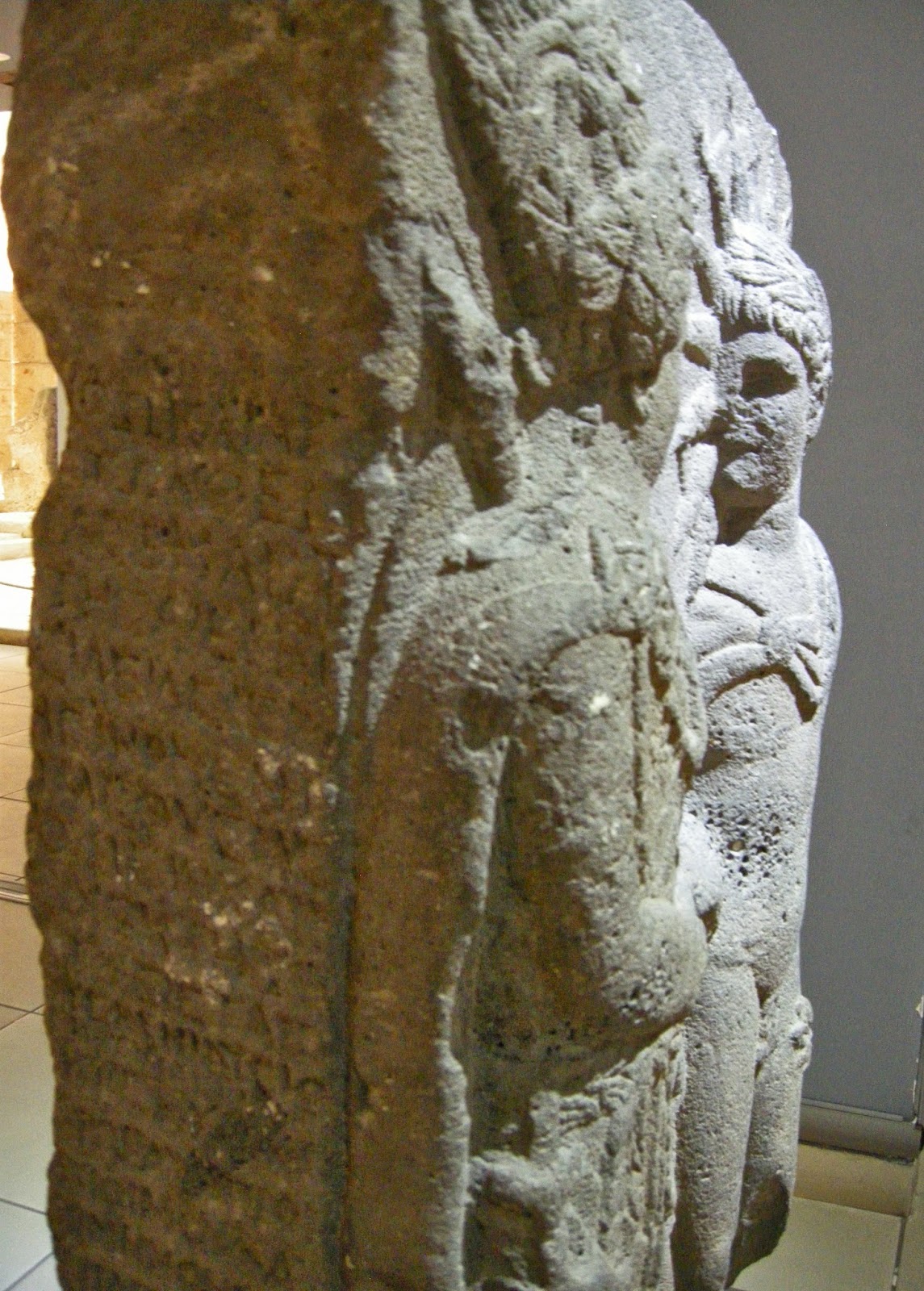 Posted by BIKE CLASSICAL at 3:26 PM