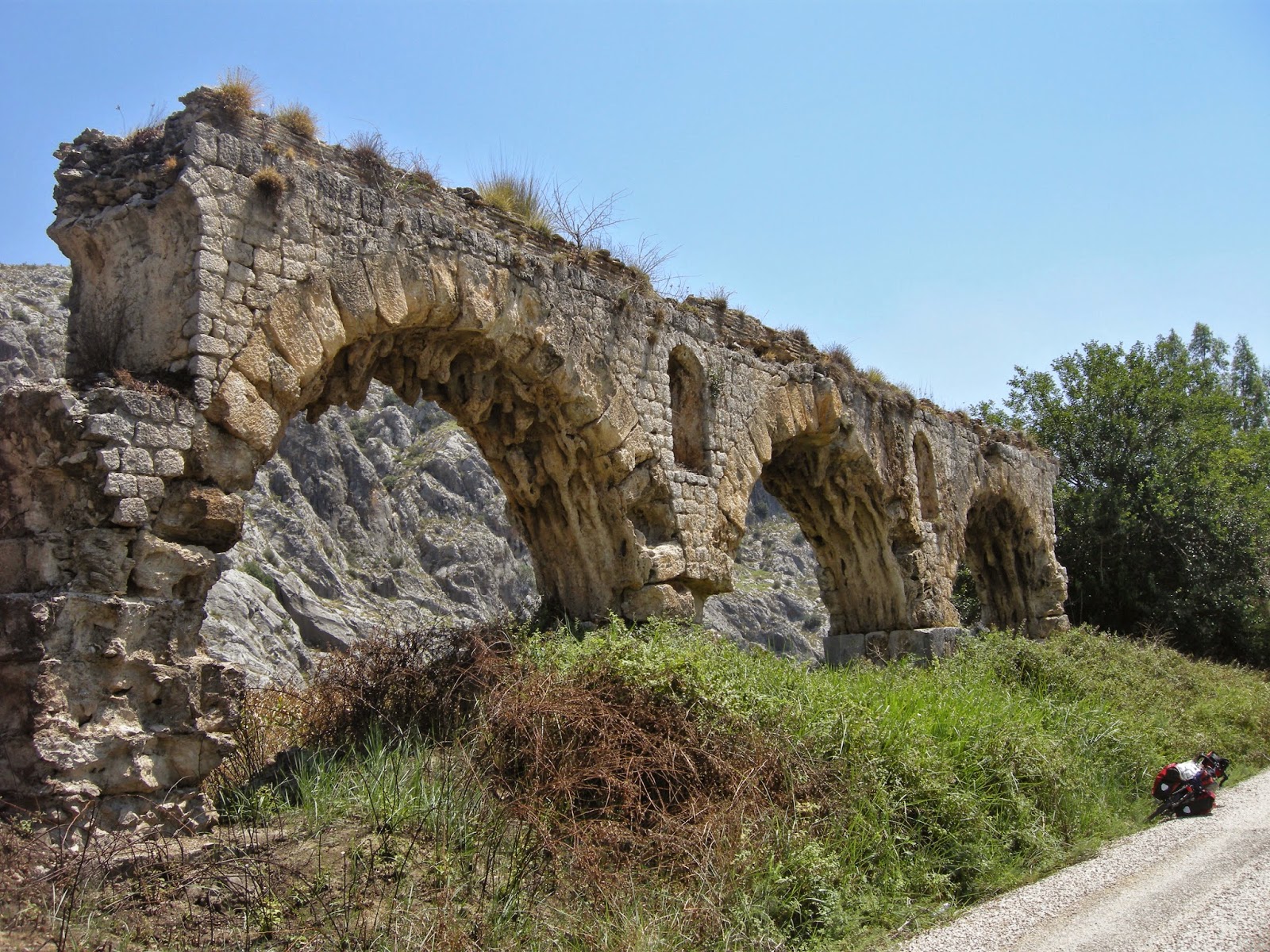 The back road to ancient Anazarbus follows the 7 km long aquaduct believed to have been built in the time of the Roman emperor Domitian, that brought water to the city from the Sumbas river. 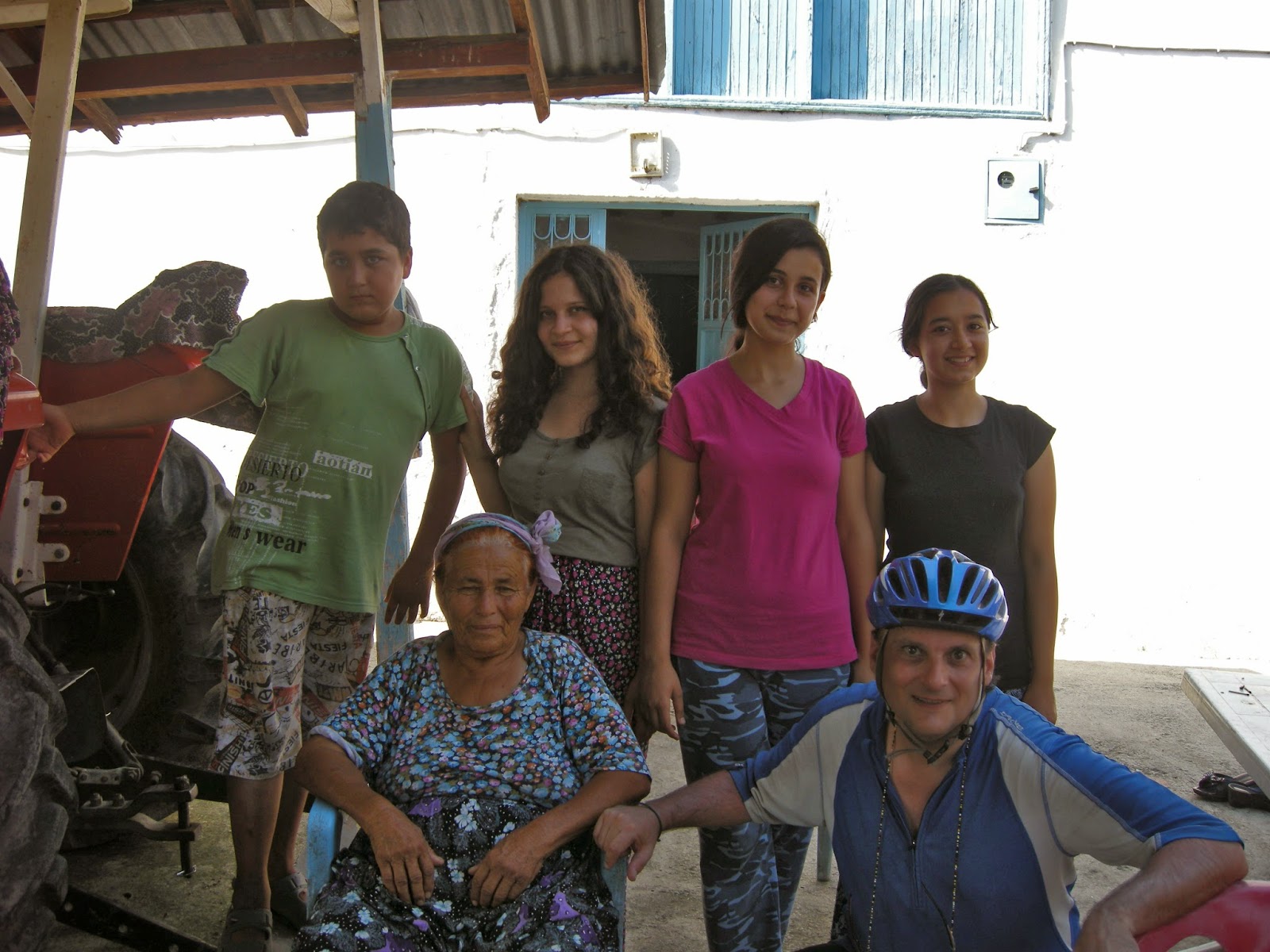 The very hospitable family of the site Bekci (or overseer of ancient Anazarbus) brought me in and housed my cycle while I went off to examine the city, which lay all amongst the village.  Just behind their house was a Roman mosaic, excavated, covered and numbered, while in their garden lay the remains of numerous architectural pieces from the site (pictured below). 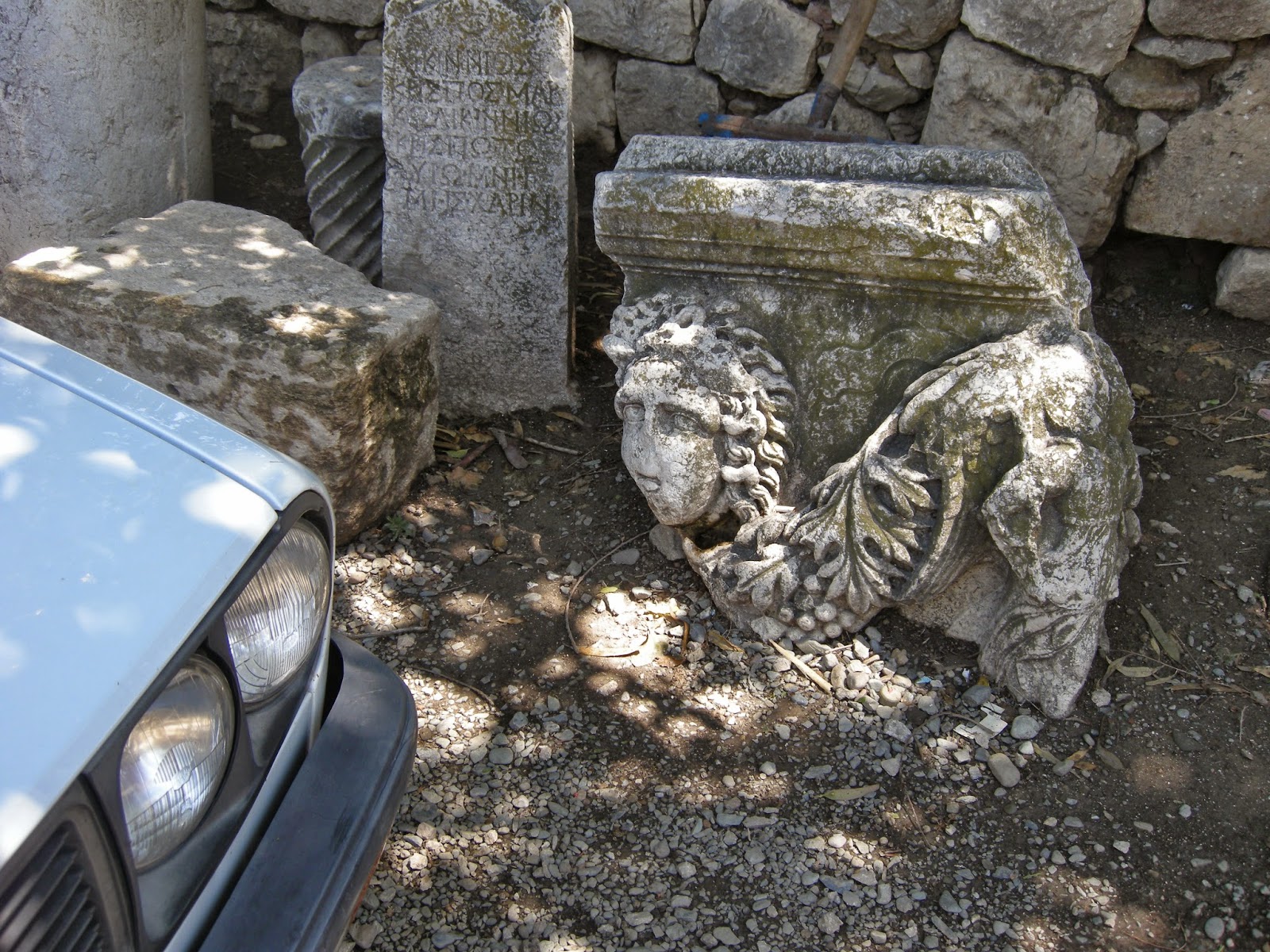 The scene is dominated in absolute terms by the collossal escarpment that protects the citadel, high above the lower city. 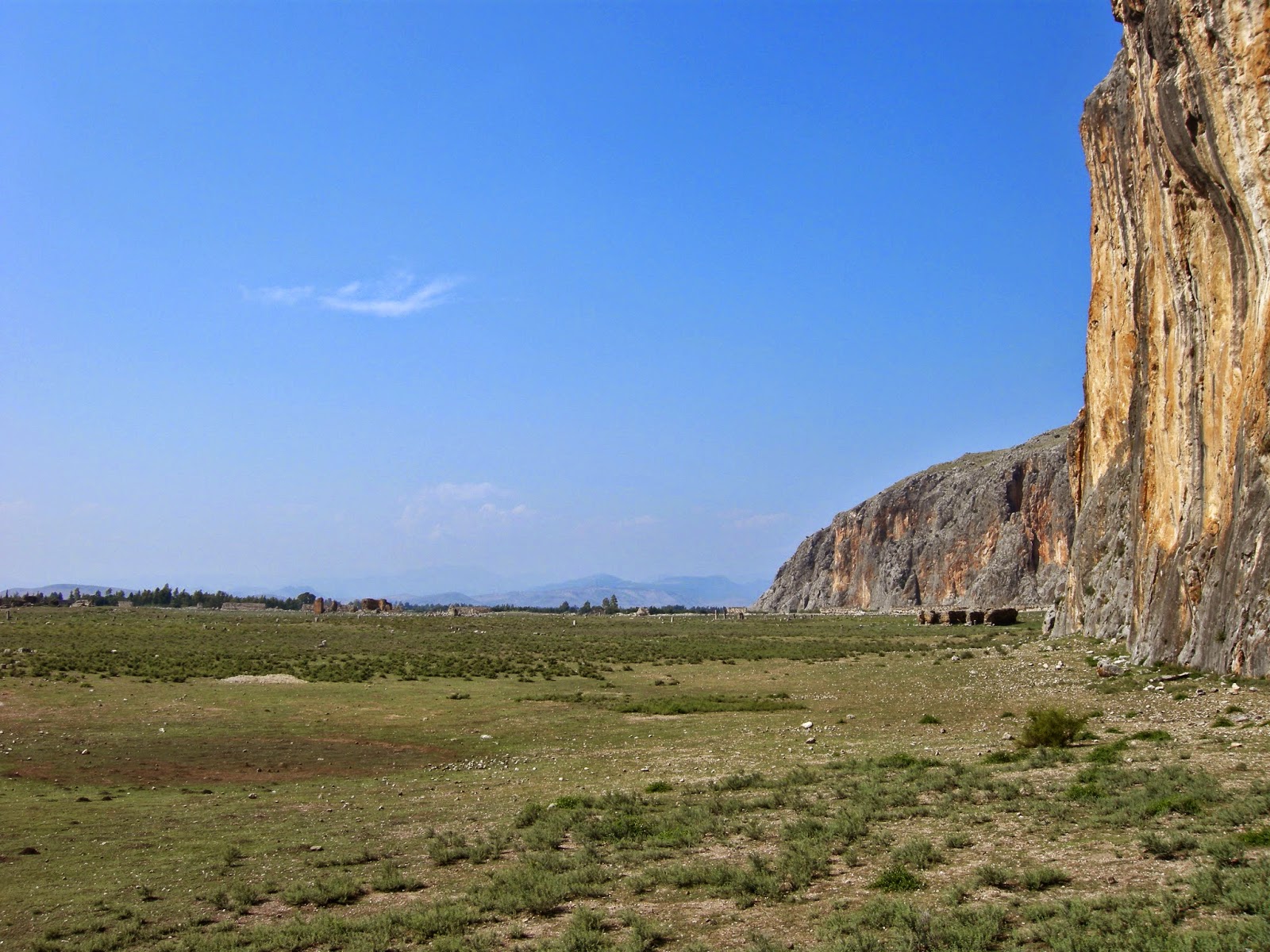 The ancient city below the escarpment is in great ruin, and little remains of its former glory as an unconquered city,  which its name is most like derived, from the Persian 'nabarza'. 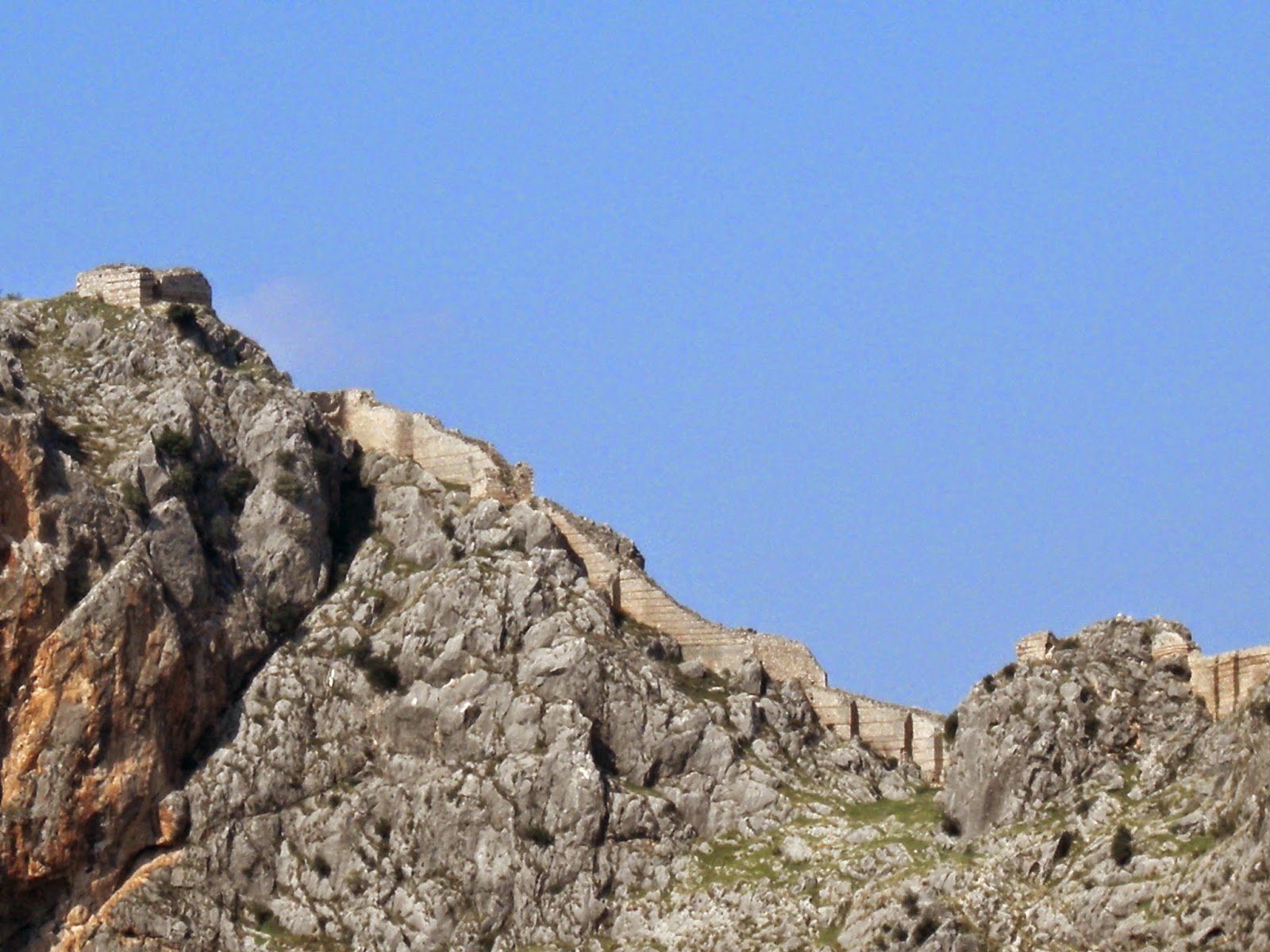 Pictured above, the ancient Byzantine walls climb the escarpment high above the lower city, while the lower city walls run several kilometers encircling and running through the modern village of Anavarza. 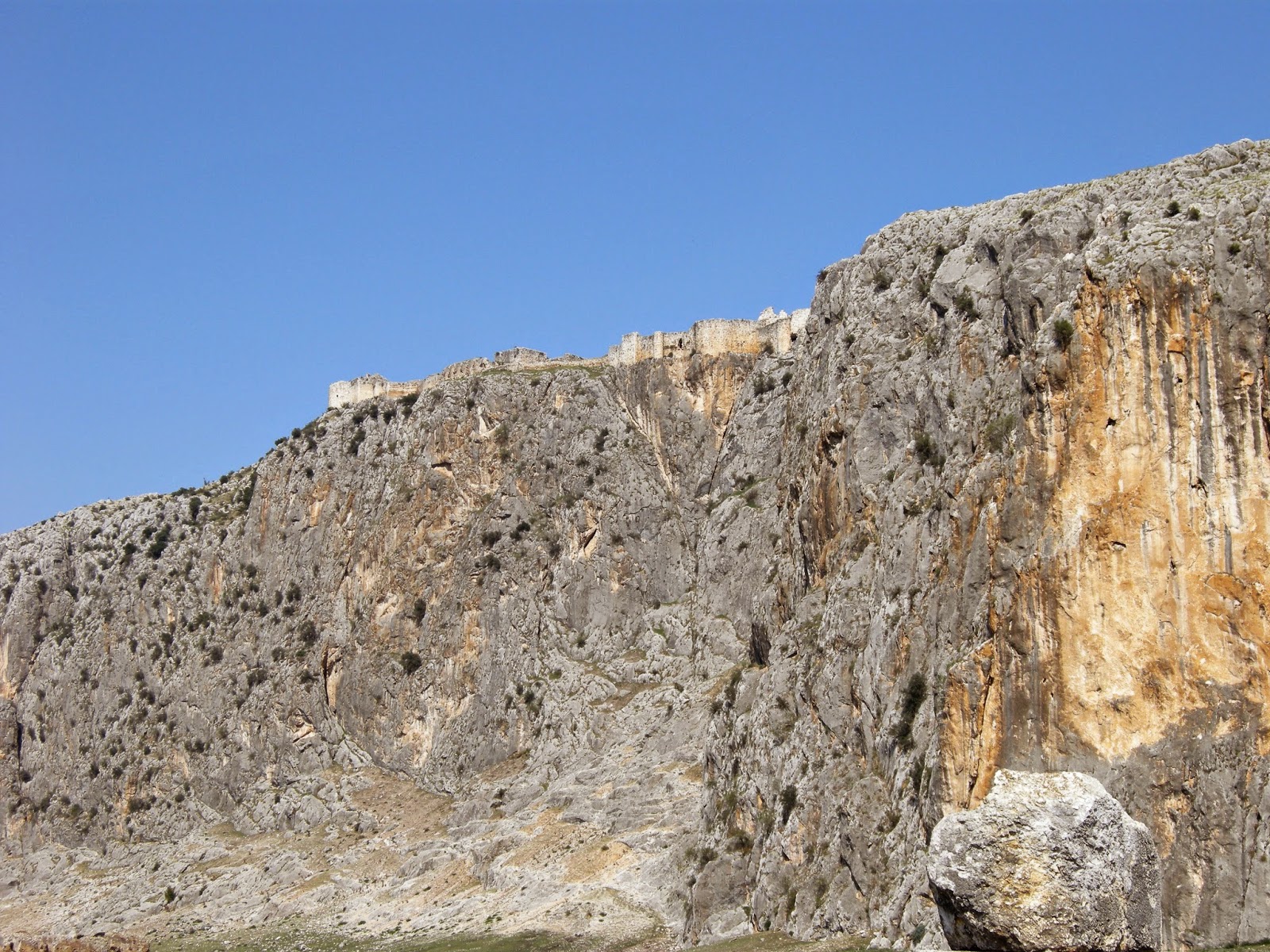 Below, the protective walls of the Byzantine citadel over look the scant remains of the ancient theater . . . , its blocks quarried over the centuries to construct the village houses and various buildings,  many of which remain occupied till this day. 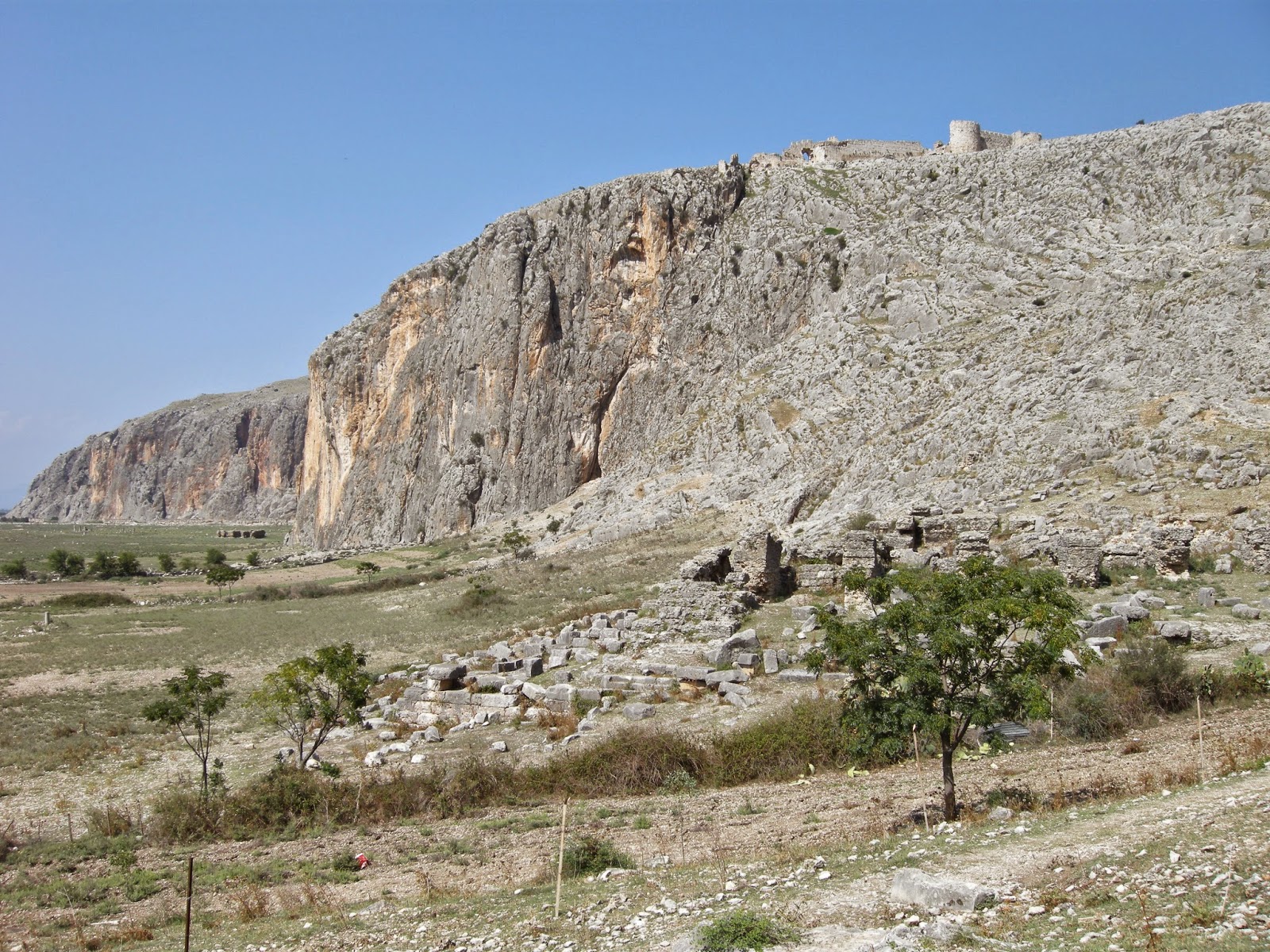 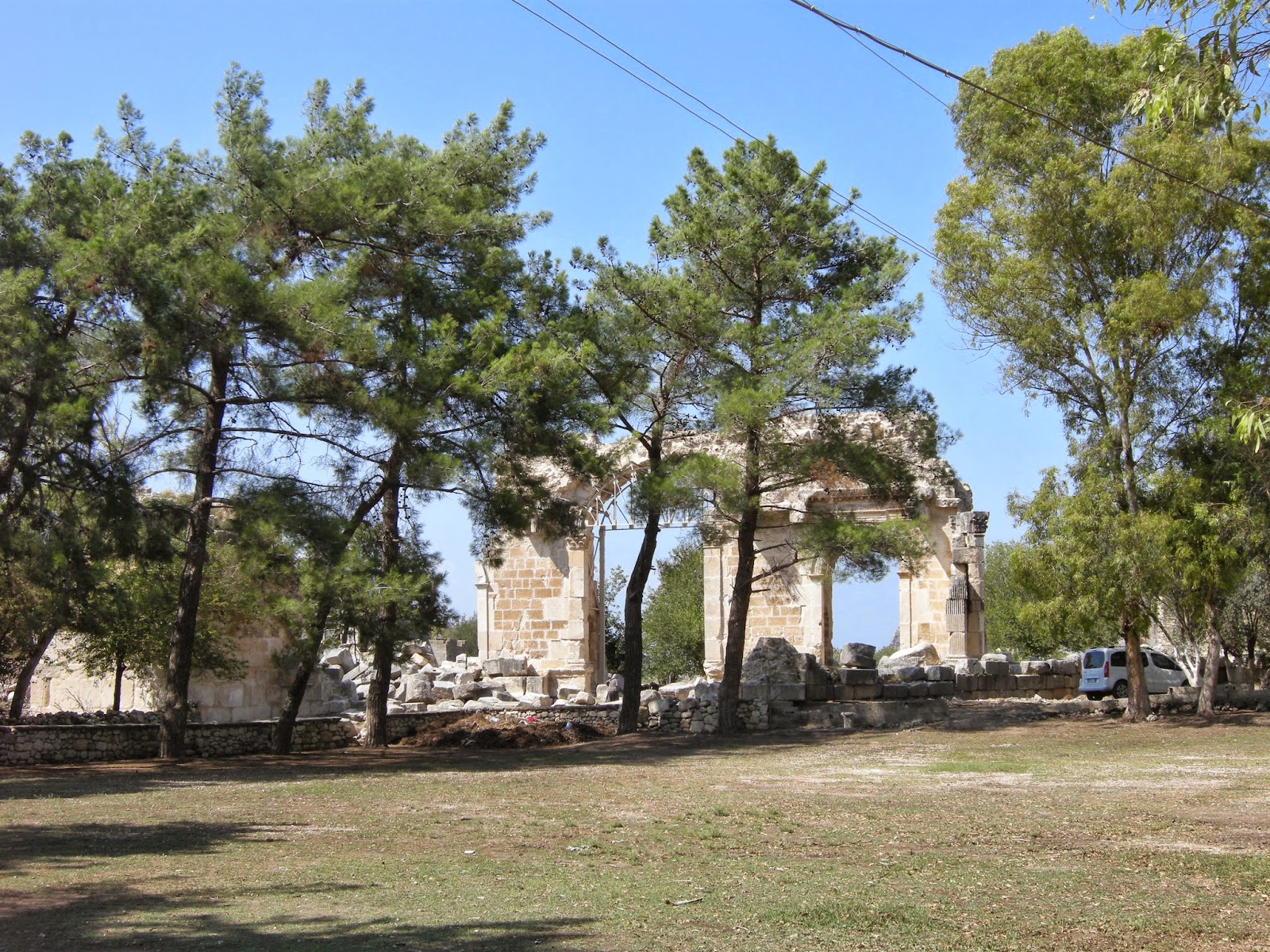 The Triumphal Arch still stands as a monument to its importance as a directly ruled Roman city beginning during the reign of Claudius, AD 41-54.  Pictured above and below, the original three arches are in the process of restoration, as the intricately carved facade and structural pieces lay all around it. 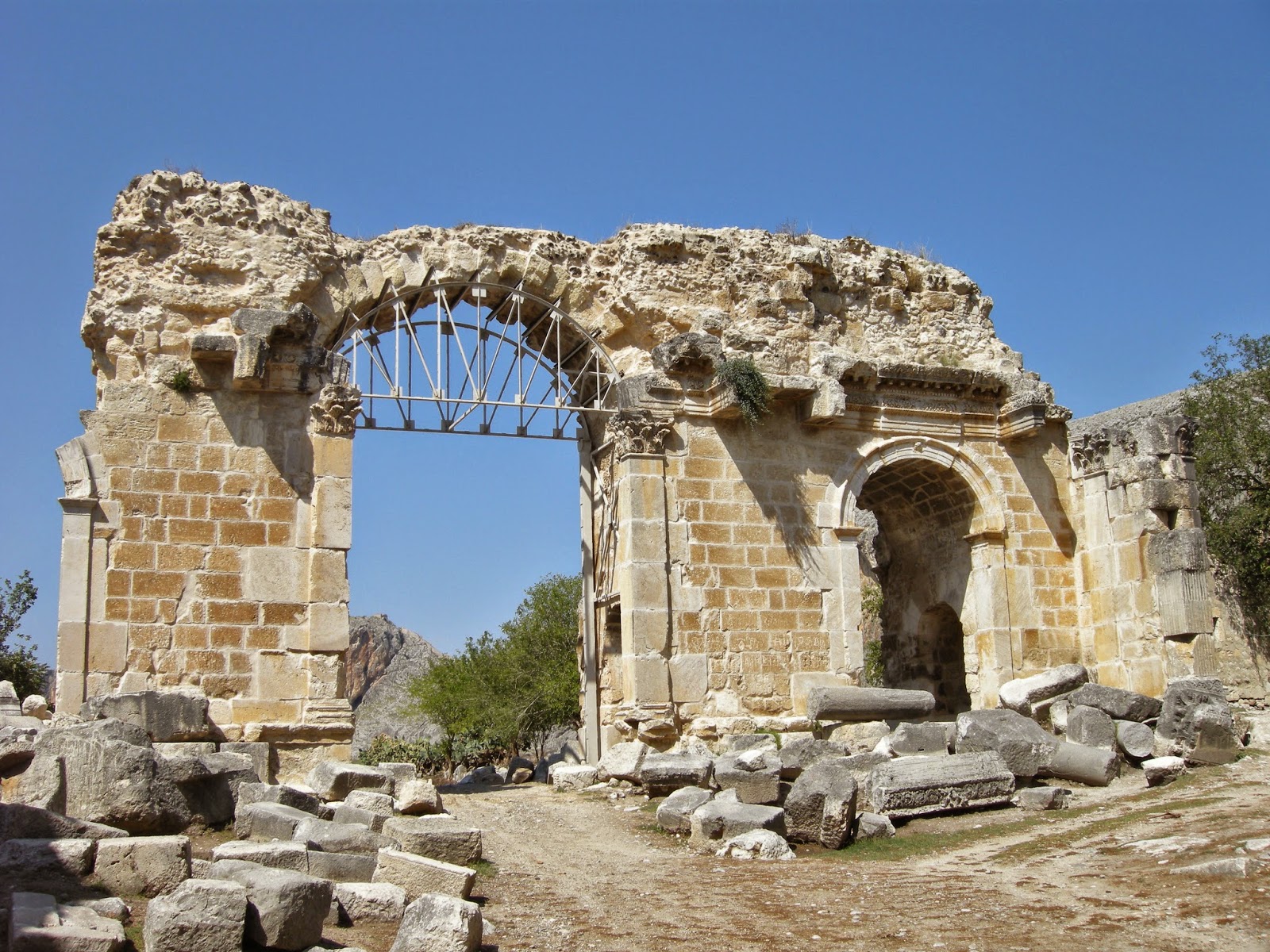 Below, archeologists unearth the ancient road inside the city walls leading from the Triumphant Arch. 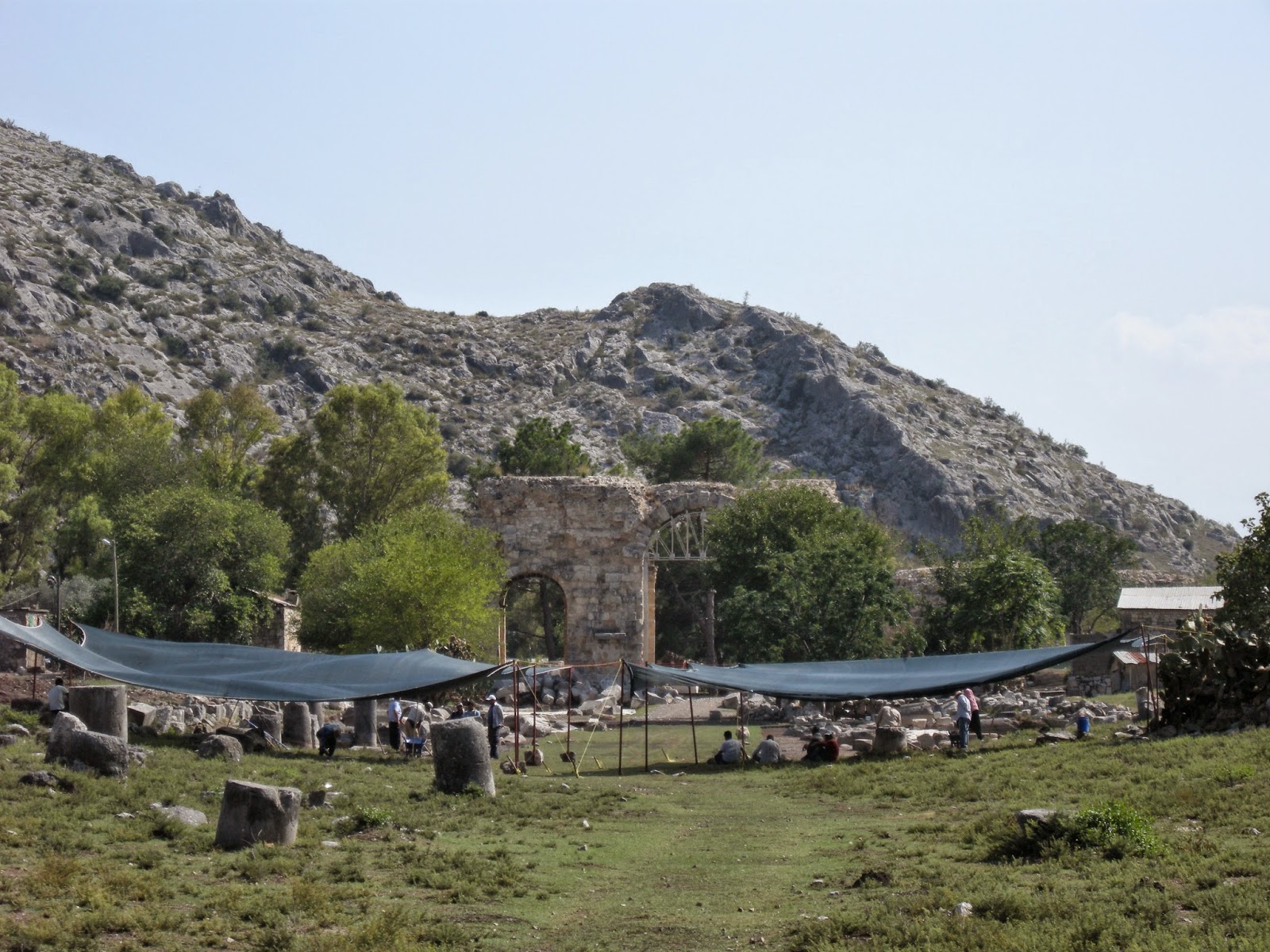 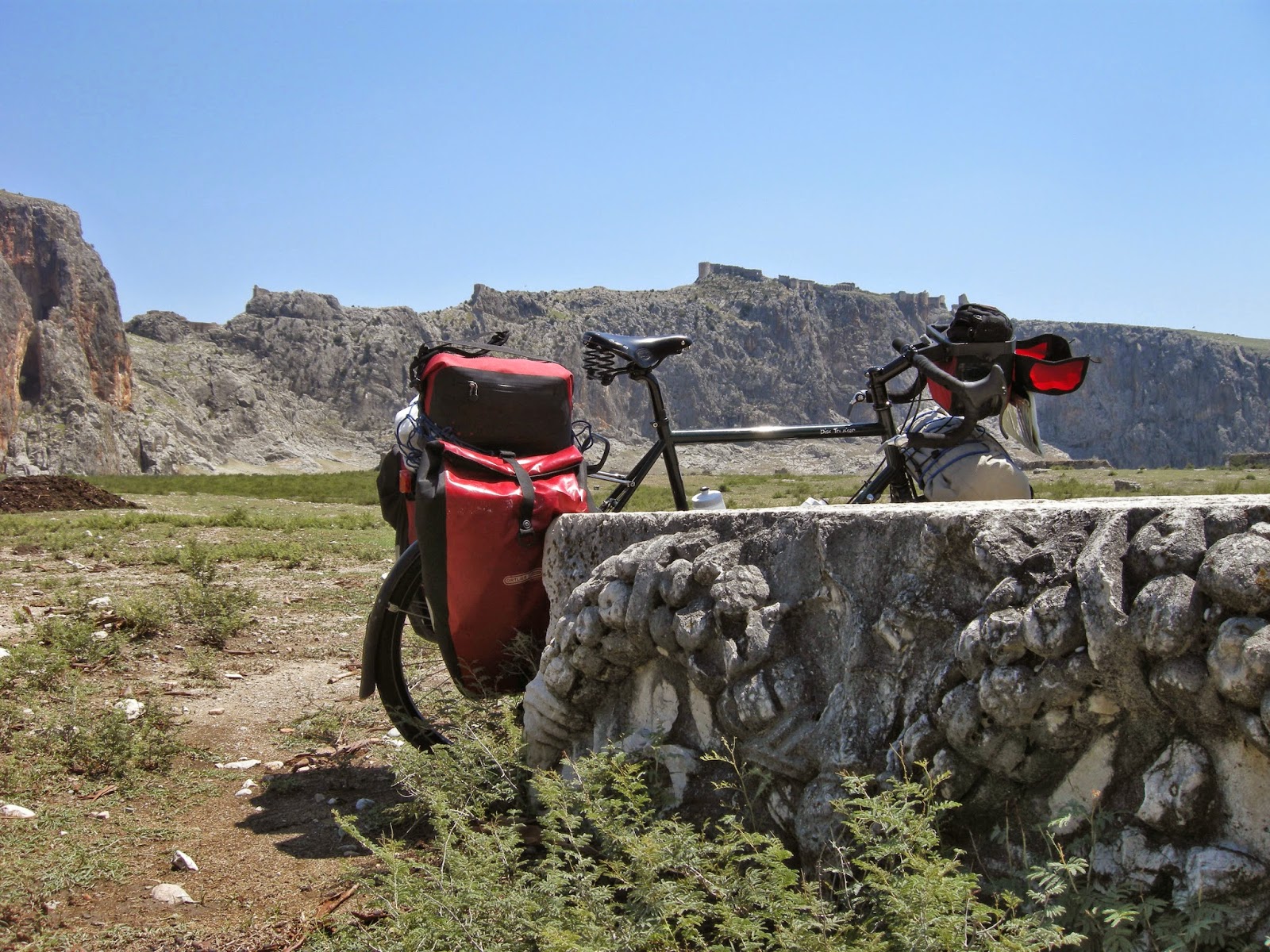 My bike rests on a long abandon frieze from one the many ancient buildings that once dominated the city of Anazarbus.  Bolow, I make my getaway following the Roman aqueduct away from the city. 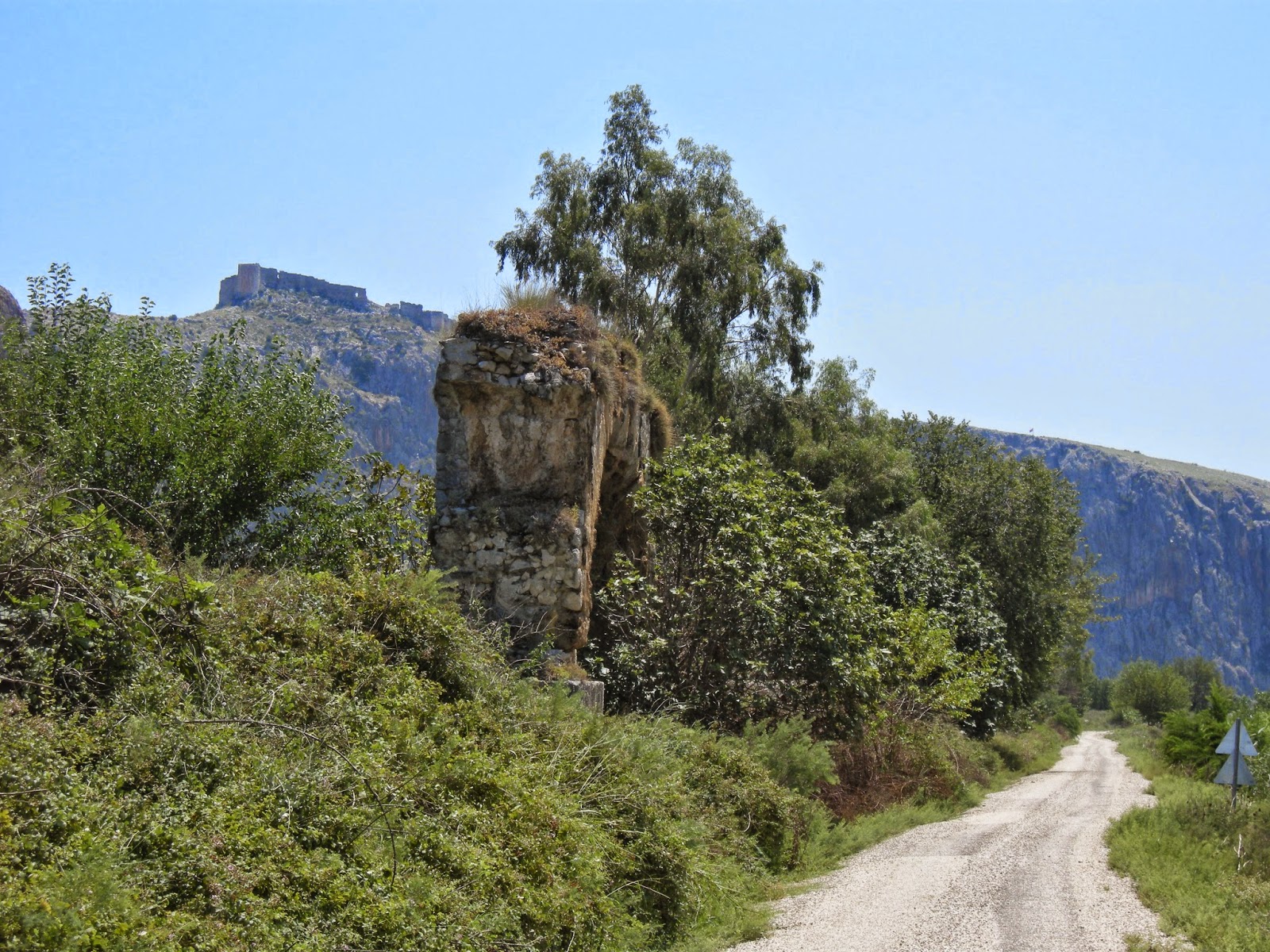 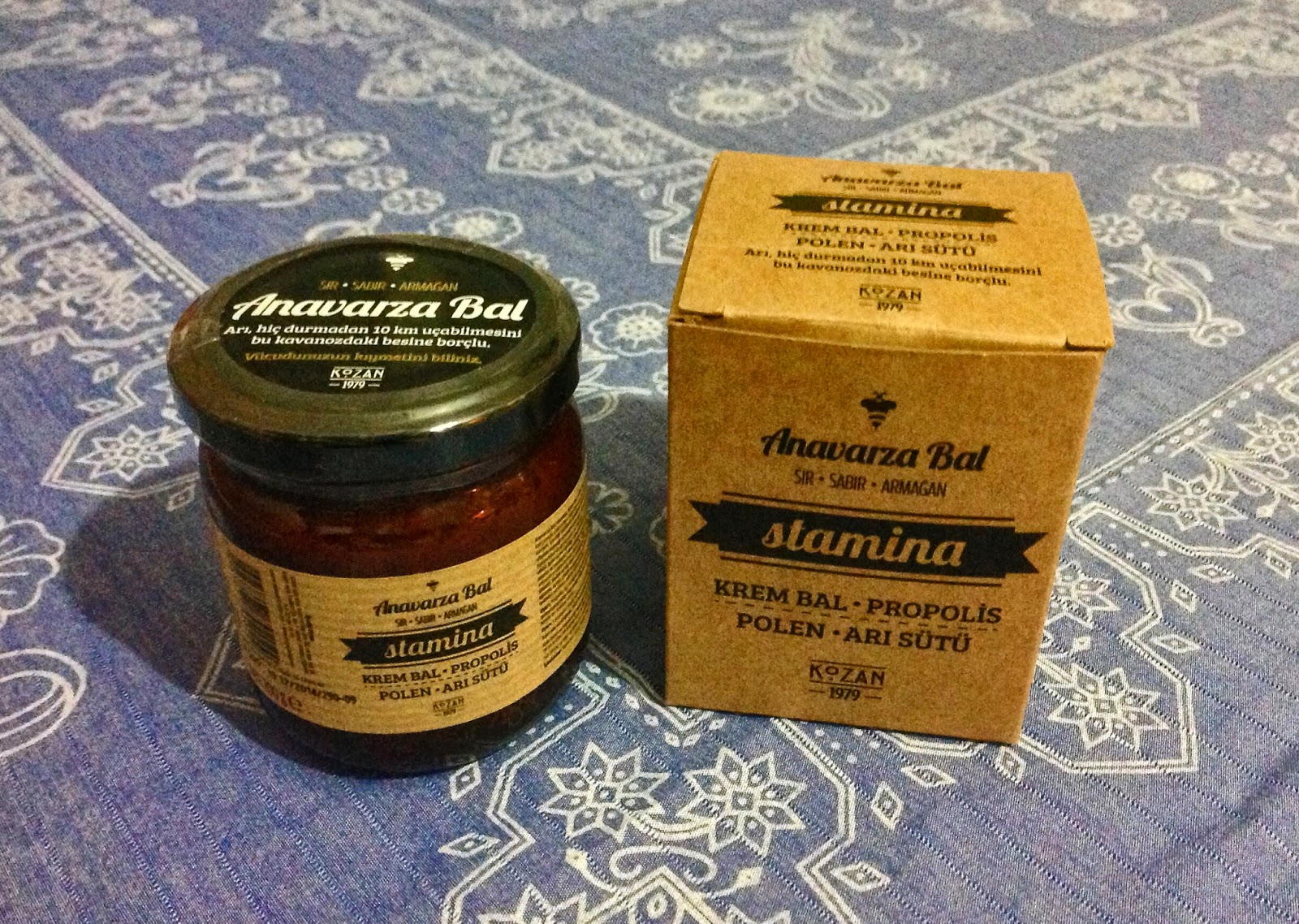 Pictured above, Anavarza Bal, which is a famous honey from Anavarza that is infused with bee pollen!!  I'm told I will feel like superman after ten days if I eat a teaspoon once a day . . . "stamina" . . . and the other box I bought said "viva"!!