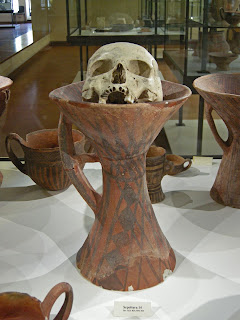 Above, a fine example of a Sepultura or grave piece, at the museum in Agrigento. 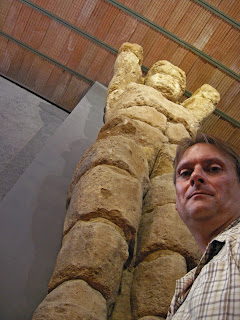 Above, a Telamon reconstructed from the ruins of the Temple of Jupiter (an hypaethral building), to celebrate the Agrigentans' victory over the Carthaginians at Himera (480-479 BC).  Built in honor of Zeus, it is one the largest temples of antiquity, a truly colossal structure.  The Telamon are believed to be carved in the image of the thousands of Carthaginian slaves, who were captured at Himera, and brought back to Akragas (Agrigento) to work on building the city and its structures. 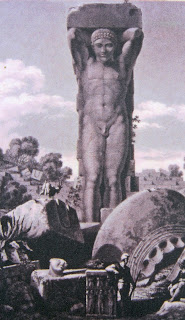 Below, the head of a colossal Telamon in the museum. 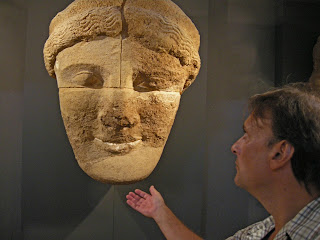 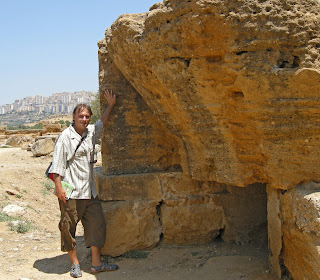 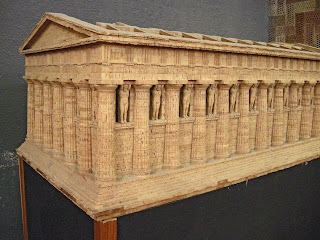 The museum near the archeological site of Akragas (Agrigento) has one of the most extensive collections of ancient pottery in the world from the prehistoric period through the 1st century BC.  The pieces are in superb condition, and shouldn't be missed!!  Below, a symposium scene. 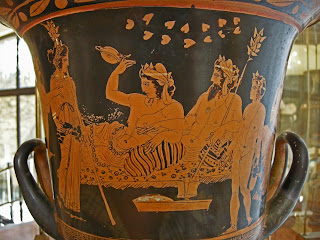 Below, the Temple of Concordia (430 BC), which is one of the most complete ancient Greek temples, due in part to it having been turned into a christian basilica in 597 AD. 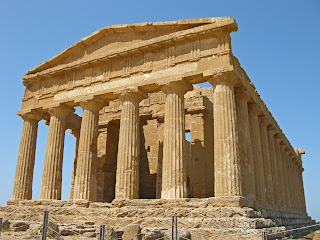 The Temple of Concordia has a peristatis of 6 x 13 columns built over a basement of 39.44 x 16.91 m; each Doric column has twenty grooves and a slight entasis, and is surmounted by an architrave with triglyphs and metopes; also perfectly preserved are the tympani. 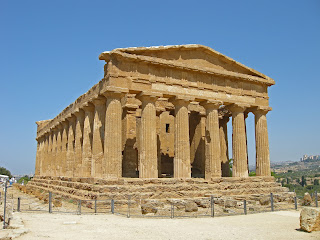 The cella, preceded by a pronaos, is accessed by a single step; also existing are the pylons with the stairs which allowed to reach the roof and, over the cella's walls and in the blocks of the peristasis entablature, the holes for the wooden beam of the ceiling. 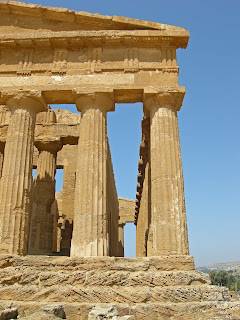 The exterior and the interior of the temple were covered by polychrome stucco. The upper frame had gutters with lion-like protomes, while the roof was covered by marble tiles. 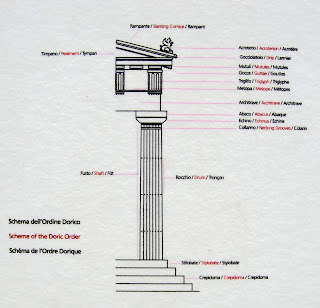 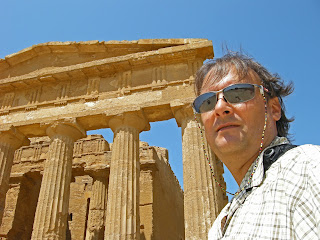 Pictured below, the Temple of Herakles.  Stylistically, the temple belongs to the last years of the 6th century BC. It has been also suggested that this temple was one of first built under Theron. Also the entablature, of which parts have been found, would date it to the 470-460s or the middle 5th century BC (though the more recent remains could be a replacement of the older ones). One hypothesis is that the temple was begun before the Battle of Himera, to be completed only in the following decades. Polyaenus mentions a temple of Athena being built under Theron outside the city, which could be identified with that of Hercules, though also with a new one in the inner acropolis. 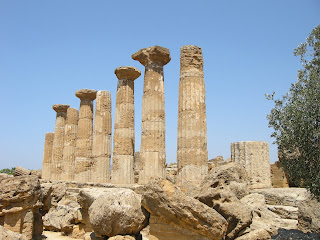 Pictured below, a slave holds a mirror for a woman. 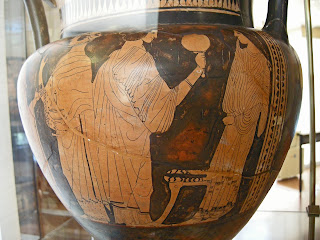 
**If you'd like to help with future postings, please feel free to support them through PATREON:
https://www.patreon.com/bikeandsailclassical
Posted by BIKE CLASSICAL at 9:02 AM