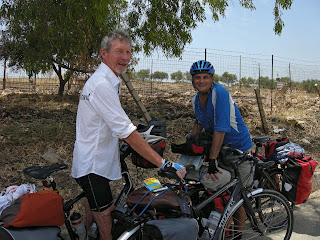 On the road from Agrigento, I ran into Dave (70 years old) and Lin (61 years old) from New Zealand, who are cycling around Sicily. 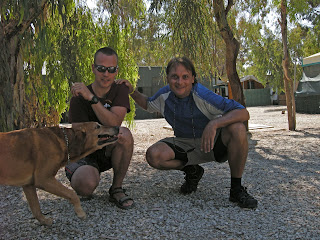 Michael was camping with Urst (great dog!) in Falconara, near Gela.  He saw me eating limone sherbet outside my tent and invited me over for some grilled steak!  He is a Dutch special forces vet of the Afgan war.  We had a great time chatting and drinking beer till the wee hours of the morning. 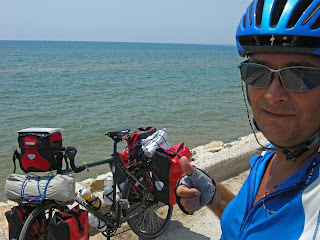 Above, a stop along the road to beautiful Punta Secca, not far from the most southern tip of Sicily (and Europe!). 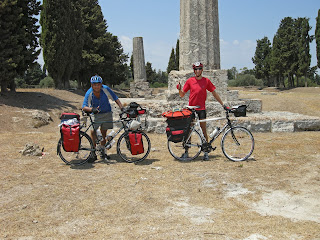 I then ran into Fast Freddy from Palermo, who was around Sicily.  We cycled and camped together for the next four days.  A great guy who directed me to the coastal roads around southern Sicily.  He is a biology Phd. candidate studying in Milano.  We stopped the rarely visited Temple of Giove Olimpico near Syracuse (above).  Below, Freddy is caught by some actors, who were performing for the kids at our campground in Marzamemi. 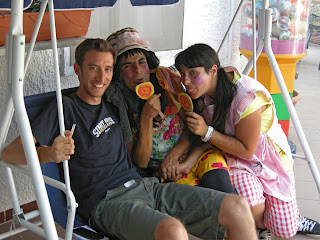 Pictured below, Denis and his girlfriend pose for a photo inside his cafe at the campground Il Forte.  They were so kind, and they treated us to fresh made croissants filled with sweet ricotta cheese, a Sicilian specialty!! 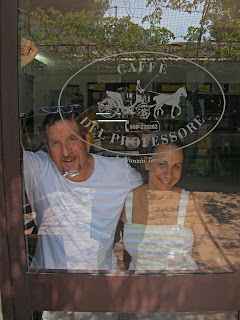 Pictured below, Cecile, who I met at the beautiful campground on the sea at Herakleia Minoa, is practicing Tai Chi in the atrium of the house I have been staying at for past week.  The owners of the house (Mario, Danella and their son Andrea) invited me in with the warmest hospitality, and I have been visiting ancient sights around Catania (ancient Syracuse, ancient Morgantina, Villa Ramano and ancient Taormina) while here. 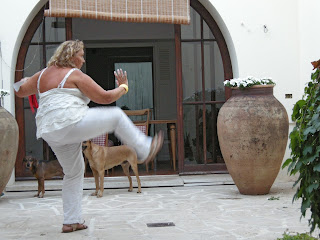 **If you'd like to help with future postings, please feel free to support them through PATREON:
https://www.patreon.com/bikeandsailclassical
Posted by BIKE CLASSICAL at 7:53 AM