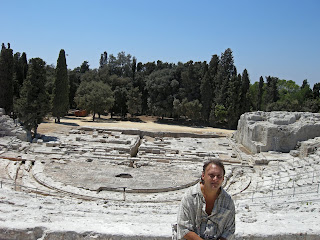 Above, the theater at ancient Syracuse, which is the largest Greek theater in Sicily, and was inaugurated by Aeschylus in 476 BC with a production of "Women of Aetna". 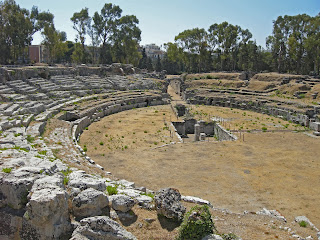 The Roman amphitheater at Syracuse (pictured above) dates from the 1st century AD.  The rectangular depression in the center was probably built for machinery that was used to create spectacles for the audience. 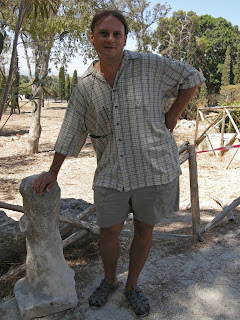 This statue post/support was just sitting outside the toilets beaconing for a pose. 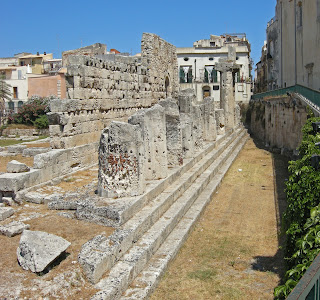 The Temple of Apollo (above and below) on the island of Ortigia, which is connected to Syracuse by two short bridges, was built in the 7th century BC of local limestone.  Pictured below, the bottom step is inscribed by its architects, Kleomenes and Epicleos (the later not pictured). 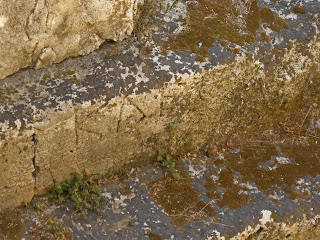 Pictured below, a different view of the Temple of Apollo on Ortigia. 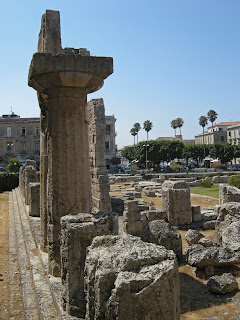 The Duomo (or, Santa Maria del Piliero, or, delle Colonne)(pictured below).  As you can see, this church has occupied the original Greek Doric temple, known in antiquity as Gelon's Doric Temple of Athena, built in 480 BC. 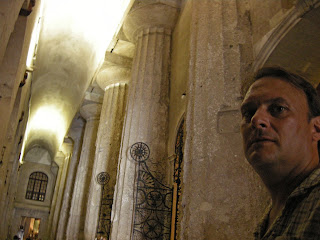 Twenty-four of the original thirty-six Doric columns remain: two columns from the opisthodomos of the cella, nineteen columns of the peristyle are incorporated in the aisles, and three more unseen. 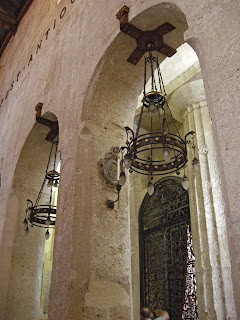 On the outside of the church can be seen penetrating the medieval wall along Via Minerva, twelve of the original Doric columns with their architrave and triglyphs. 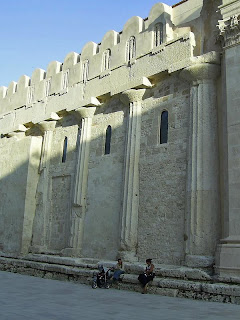 The Greek theater of Taormina was built in the 4th century BC, and as you can see by the stage scena was built by the Romans, thus hindering the audience from the spectacular view.  The Greeks always (when possible) positioned their theaters with such views. 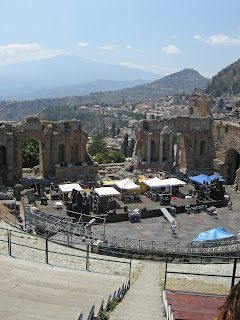 Patti Smith (married to the late Fred Smith, infamous guitarist of the MC5) was to perform at the theater the next day via Detroit, but I had to pass.  I did manage snag this poster though (pictured below)!  The Taormina theater holds some of the best concerts in all of Italy. 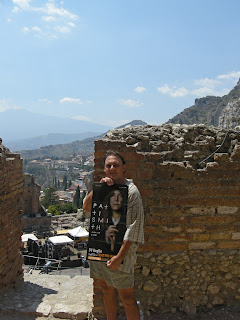 Patti Smith (married to the late Fred Smith, infamous guitarist of the MC5) via Detroit!!  The theater holds some of the best concerts in all of Italy.